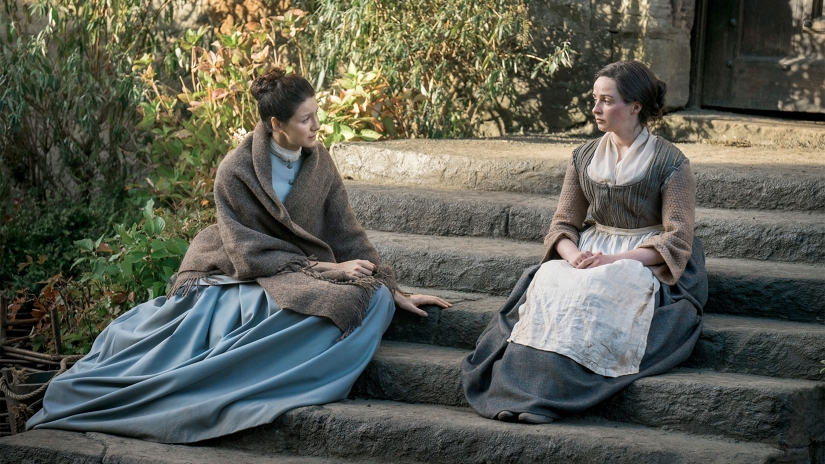 Reunions, betrayals and surprises in the latest Outlander season 3 episode. Spoilers ahead in our review…

Well, I suppose there are probably worse ways to find out about your husband’s other wife, but not many. The other shoe dropped on the latest episode of Outlander, and it made for some emotionally-riveting television. After last week’s instalment, which felt like phoning it in for this character-driven drama, Outlander delved deeper into the complications of reuniting with someone you love after two decades apart. First Wife wasn’t always pretty, but it was always true.

Following the burning of Jamie’s print shop, Claire and Jamie return home to Lallybroch with Young Ian in tow. But Claire’s homecoming is not as simple as she might have liked, which is what makes it that much more delicious and cathartic for us. After several people have accepted Claire’s half-hearted explanation for her twenty-year absence with barely a follow-up question, Jenny (bless her) acts like an actual human being, expressing betrayal, confusion, anger, and disbelief at her sister-in-law’s sudden miraculous return.

When Claire went back through the stones, she wasn’t just leaving Jamie; she was leaving a whole life behind. This included Jenny, who tells Claire she came to think of her as a sister before her departure. Imagine if someone you considered family couldn’t even be bothered to write a letter to let you know they were alive. Jenny grieved for Claire — both for herself and for her brother. It was Jenny who had to pick up the pieces after Claire’s departure left Jamie broken. Now, we know it’s not Claire’s fault, but Jenny has much less information.

Now imagine you’re in Claire’s shoes, having to try to effectively explain to someone you love why you have betrayed their trust at the most fundamental of levels, without being able to actually tell them the whole truth. Jamie tries, but Jenny calls bullshit on Claire not doing everything she could to get back to Jamie. Eventually, Claire settles for a half-truth, telling Jenny that she remarried and couldn’t reach out to Jenny for the sake of her own survival. Jenny says she sees truth in Claire’s story, but it’s still not enough. A half-truth rarely is.

Now, angry Jenny is an entertaining Jenny when you’re not the target of said ire. For much of this episode, Claire is, which is why Jenny gets one of her children to tell Laoghaire of her husband’s return. That’s right: Jamie up and married the vindictive girl from seasons one and two who once tried to murder Claire. This episode, she tries to murder Jamie. (Well, she was probably aiming for Claire.)

Claire is understandably distraught and infuriated to not only learn that Jamie has another wife that he didn’t tell her about, but that the other wife is Laoghaire. It doesn’t help that she finds out this piece of information when Laoghaire storms into their bed chamber, daughters in tow to call Jamie “daddy.” It never feels good to feel like the other woman, even if the truth is more complicated than that.

And, if you haven’t noticed the theme already, the truth usually is more complicated than the proverbial “that.” If you thought Jamie and Claire’s reunion was too easy for two people who have lived separate lives for twenty years, then you would have been right, and it feels good for Outlander to address that here. Claire, who has made the bigger sacrifice, leaving not only her daughter, but her career, home, and home era, starts to have some serious doubts following the revelation that Jamie has been lying about his second wife.

I’m not sure if I really believe Claire will leave, as she threatens to do before Jamie is shot, but I do think she needs Jamie to understand that he needs to do better. If we learned anything from Creme De Menthe, it’s that Jamie has become too comfortable with lying to the people who are closest to him. That’s the luxury of a man who isolates himself; it’s a luxury the man who honestly enters into love cannot afford.

After Claire sews Jamie up, a callback of sorts to when they first met and fell in love, she reminds Jamie that he is accountable again to love, intimacy, and everything that comes with it. To his credit, Jamie listens. “Will ye risk the man that I am, for the sake of the man ye knew?” Jamie asks Claire come the end of the episode, and it’s a beautiful sentiment. Neither Jamie nor Claire are the people they once were, that’s not how life works, but that doesn’t mean those people are gone, either. With one line, Outlander embraces the truth that love is always a risk.

Last week, I lauded Outlander‘s commitment to avoiding tired ‘will they or won’t they’ romance tropes in favour of a more complex, interesting depiction of love. The show does this by never forgetting that love is always a terrifying leap of faith, even with two people as in love as Jamie and Claire. The show often indulges in narrative tensions beyond that reality, but this is the foundation of this story: the terrifying decision to give yourself to another.

Speaking of narrative tensions beyond Claire and Jamie’s relationship, that’s where the pirates come in. Following the realisation that Jamie will have to pay a hefty sum in annual alimony to a bitter Laoghaire, Claire and Jamie decide to retrieve the treasure Jamie once found on seal’s island. (Remember that prison break he enjoyed earlier this season? Yeah, he actually found a bunch of jewels, but just left them there to return to prison like the beautiful idiot he is.)

An injured Jamie is unable to swim out to the island, so an eager Young Ian volunteers for the mission. This means Claire and Jamie can only watch from afar as a ship sends men to the same island at the same time as Young Ian (rotten timing, eh?) and capture the boy. The ship then immediately sets sail, leaving a helpless Jamie and Claire behind.

This will no doubt launch the next chapter of their story, a tale that will take us to the open seas. We get a cinematic taste of the scope of that journey in the episode’s final shots, as the camera sweeps away from an ever-diminishing Claire and Jamie, out into the ocean and away from the familiarity of the Scottish shores.