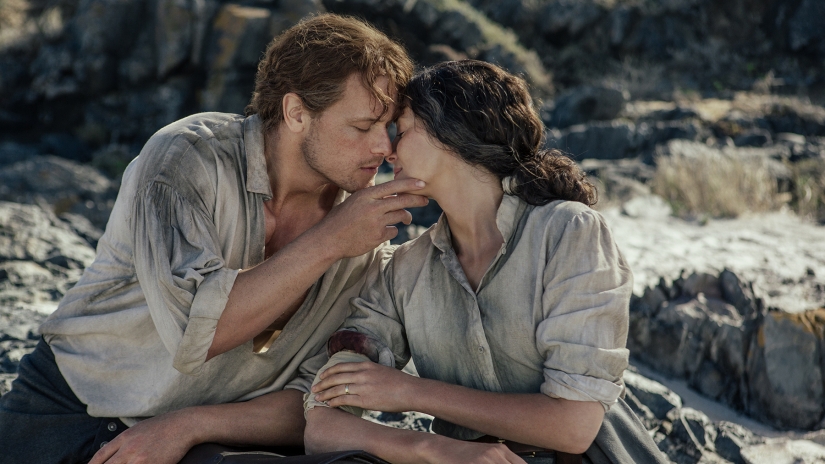 The latest Outlander season 3 episode opens a new chapter in Claire's journey into the unknown, but haven't we seen it all before?

If you’re looking to determine how you feel about Outlander, this is a great episode to do so. Sure, there’s no Scotland, but it has pretty much everything else we’ve come to expect from this show: Claire as a stranger in a strange land. Medical horror. Awesome weddings. And steamy Claire/Jamie sex. Uncharted was all about this new chapter in Claire’s journey into the unknown, but I couldn’t help thinking these are all elements we’ve seen before.

Let’s start with the first act, which sees Claire washing up onto the shores and having to fend for herself in the tropical wilderness. While we’ve seen Claire out of her element before, I think this is the most dire we’ve ever seen things get in terms of wilderness survival. This is, like, Hunger Games-level . While Claire demonstrates a badass degree of comptency (must have been all that time hanging with her uncle), there are bugs and snakes and just a general lack of food or water. By the time Claire stumbles into the home of Father Fogden, she’s unable to stay conscious, let alone get to Jamaica and warn Jamie of his impending doom.

It turns out Father Fogden is quite the eccentric (another Outlander mainstay!). He smokes marijuana and leaves much of his decision-making up to a coconut named Coco. Fogden lives with the mother of his late wife, who hates Claire on sight in a lazily explained way. You’d think the woman would be excited to have someone to interact with other then Fogden, but nope. She just straight-up hates Claire and wants her gone as soon as possible.

That’s cool with Claire, who is desperate to get on her way and find Jamie. When news of sailors on the shore reaches Claire, she sprints towards this episode’s romantic reunion, which involves using a shard of mirror to catch Jamie’s attention and the ripped Scotsman bounding across the beach to his lady love. It’s the kind of too-easy reunion that makes all of the drama these two have gone through over the past few episodes seem even more contrived, but it’s nothing if not heartwrenchingly romantic.

That’s what I’m talking about when I say this episode is a good metric for determining if you like this show. If you’re here for this love story, then you’ll probably have more forgiveness for the contrived drama. (I will weather multiple boa constrictors and ant attacks if it means epic beach reunions.) If you’re not as keen on the romance, then this show is probably not for you.

Now, I know what you’re thinking: ‘This show has always been about romance, Den of Geek.’ This is true, but the romantic elements have not only become much more predictable and repetitive since Claire and Jamie’s reunion, but also have started to commandeer other elements of the story.

Season three’s freshness has come not in Claire and Jamie’s love, but in their connection to the younger generation and how we’ve seen their family grow. This included the Brianna and Roger stuff in the first half of the season, and includes Fergus and Marsali’s wedding here. First, we get Claire and Marsali bonding over birth control, the kind of scene that we hardly ever get in period drama. Then, we get Jamie giving his name to Fergus, his son in all the ways that count.

Earlier in the episode, we see Claire often at Mamacita when Father Fogden tell Claire that she is still grieving over the loss of her daughter. Claire understands. She not only lost Faith before she even had the chance to know her, but had to let Brianna go, as well. The best parts of these season three episodes continue to be the familial bonds both Claire and Jamie forge with these young people, perhaps replacements of sorts for the children they cannot be with, but nonetheless real for that fact. They are just as much family.

By the end of the episode, Claire and Jamie are continuing on their merry way aboard a repaired Porpoise. Jamie has become captain of the ship following the death of the previous captain, the kind of contrived plot point I was mentioned previously. (This world sometimes bends around the Claire/Jamie love story, and it can be hard not to notice.)

We even get our requisite Claire/Jamie sex scene, which manages to be both totally hot, as Jamie takes Claire against the captain’s desk, and played for comedy, as poor Willoughby knocks at the door, asking if they want some more turtle soup. I’m not sure if Outlander pulls the tonal shift off. It’s not really this scene’s fault. It’s the whiplash of this episode in general, which saw Claire fighting for her life in the first act of the episode and having drunken ship sex in the final scene. If you can handle this kind of tonal dischordance, then congratulations! Outlander is for you.