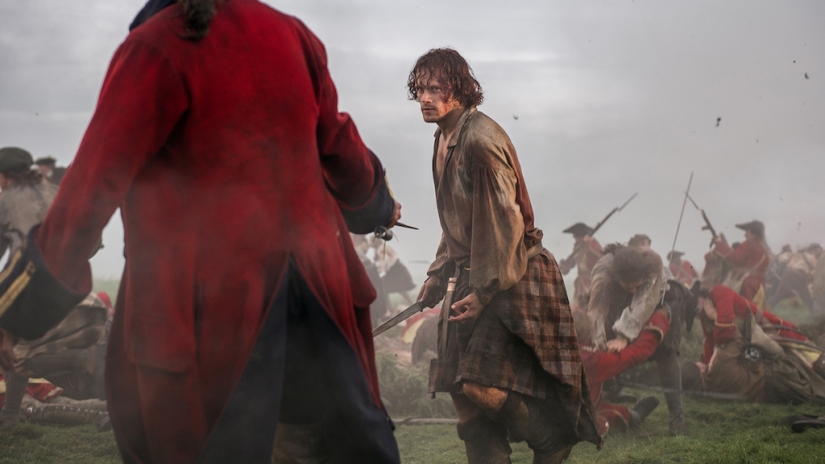 Spoilers ahead in our review of the Outlander season 3 premiere, another solid chapter in this wonderful adaptation…

We don’t talk enough about time, pacing, and chronology in television — probably because most TV shows make the same, standard choices when it comes to time in their storytelling. Outlander, as a time travel show, is one of the few exceptions, playing with not only its characters’ perceptions of time, but also its viewers’.

This has never been more apparent than in the Season 3 premiere, which told its story in two separate timelines, set centuries apart, paced in wildly different ways. While Jamie’s premiere storyline takes place over the course of a few days, Claire’s takes place over the course of months. They are tied together not by any setting, character, or subject, but by this one thematic question: how do you learn to live again when you have lost the thing that means the most to you? How do you rejoin the battle that is life?

Outlander thrives when it comes to these sorts of emotionally-driven questions. This story has never relied on the plot twist, like too many other shows of its prestige TV ilk, but rather prioritises other things. There is enough drama and emotional suspense in these characters’ lives. We don’t need to be surprised by anything — a particularly helpful narrative characteristic to have when it comes to a book-to-screen adaptation.

On Outlander, it’s never about the plot twist. In fact, we often know much more than the characters, an intentional side effect of a story that jumps around chronologically. We know what will happen with Claire and Frank’s rocky relationship because we have seen Claire 20 years later, their adult daughter questioning whether Claire ever loved a now-deceased Frank at all. On Outlander, the plot isn’t the point; the emotions are the point. That being said, plots are helpful for organising thoughts, so here’s everything that went down in The Battle Joined.

When we catch up with Jamie, he is in the aftermath of Battle of Culloden, one man in the countless piles of dead or dying soldiers. It was a bold, non-romantic depiction of the battle involving a lot of bullets and bayonettes. The Scottish forces are effectively quashed by the English, as we knew they would be. (Again: the plot is not the point.)

Keeping with the temporal gymnastics of the rest of the episode, we see the battle not as it’s going on, but in a series of flashbacks Jamie remembers as he lies wounded on the battlefield. They are reminiscent of the way Ronald D. Moore used quick-flash montages at the beginning of every episode of Battlestar Galactica to tease what was to come. Here, they play like PTSD, the kind TV shows rarely acknowledge when it comes to the “glory” of war in TV drama.

While Outlander may not rely on plot twists, that doesn’t mean it doesn’t throw in some clever surprises every once in a while, as it does with the reveal that Jack Randall has been lying (apparently) dead on top of Jamie as he remembers their fatal fight on the battlefield.

Again, the crux of this scene relies not on the outcome of the fight — we all know Jamie will survive — but rather the emotion of it. This is the man who tortured and raped Jamie, the man who raped his surrogate son and who attempted to rape his wife. He is a terrible human being. The two fight not for dominance, but for survival and, in Jamie’s case, for vengeance.

Killing Black Jack Randall was one of the things Jamie felt like he had to do. Other things on that list included: protect his clan and be a good husband to Claire. Over the course of a few days, he more or less loses all of those things that gave purpose to his life. He sends Claire and his unborn child back through the stones. He kills Randall. And he listens to the English kill his clan off one by one. This is why, when John Grey’s brother spares Jamie’s life, Jamie begs him not to. He is a man without a purpose.

By the end of the episode, Claire has found new purpose in her newborn baby and even her relationship with Frank. Jamie may return to Lallybroch and his sister, but something tells me it is going to be a lot longer before he finds purpose again.

While Jamie is literally fighting for his life in 18th century Scotland, Claire’s fight for survival is much more nuanced. Her life may not be at stake in the same way Jamie’s is — or even in the way it was when she herself was in Highlander Scotland — but she is still struggling to get her bearings and find purpose in a life without Jamie.

One of the most interesting aspects of Claire’s life in 1948 Boston is its depiction as much more rigid than the one she had in 18th century Scotland or even 18th century Paris, where she may have been bound by upper-class court society, but at least she was able to practice medicine at the hospital without being mocked by snooty, misogynistic Harvard professors.

We like to think of social progress as a straight line of progression from the past to the present, one that will hopefully continue upward on into eternity, but, if contemporary events have taught us anything, it’s that reality is much more complicated than that. Social progression zigs and zags. We don’t always keep the progress we have made, and progress does not always mean progress for everyone.

That being said, Claire has a pretty great partner in Frank. He may not like the new-ness of America, but he really is trying to begin a new chapter with Claire. The Outlander love triangle has never operated like other triangles on TV. It is not about the suspense of who Claire will end up with. If she could choose, she would choose Jamie. And we know that she spends all of Briana’s upbringing with Frank.

It’s about the emotion of the relationships — and not just Claire and Jamie’s. Frank is a good man. He is a feeling man. He loves Claire, and wants a life with her. But Jamie will always be a spectre in their relationship, if not in the forlorn looks Claire sometimes gets when she is thinking of her lost love, then in Brianna’s red hair.

And while Frank may be a good partner, especially by contemporary standards, that doesn’t change the whole world. One of the scariest, most infuriating parts of this entire episode is Brianna’s pregnancy. The doctor talks to Claire as if she’s not even there, then puts her under against her will. This would be terrifying for any woman (or person), but may be especially terrifying for a woman who suffered a heartbreaking miscarriage.

When Claire wakes up, she is confused and frightened for her baby’s life, asking if her baby is dead. This isn’t paranoid or misplaced. She has lost a baby before, and she has just been drugged against her will. Melodrama is a refreshing, underrated genre because it prioritises emotion and always takes whatever its characters are feeling seriously. This is most obvious in moments like this one, which are so rarely ever shown on prestige TV and, if they are, are not necssarily played for emotion, so much as horror or suspense. Again, we know Brianna will survive, but that doesn’t gut the powerful terror of this scene.

It also makes what comes next, Frank’s entrance, so comforting. Claire wants Jamie, but he is not here. And, in terrifying or joyful moments, the reason why (in this case: time travel) doesn’t matter. It just matters who can be there in that moment and, for now, it is Frank.

All in all, the Outlander Season 3 premiere was another solid chapter in this wonderful adaption. You might know what’s coming next, but it doesn’t matter. It’s all about the journey. It’s all about what Claire, Jamie, and Frank make you feel. In the hands of this stellar cast, crew, and creative team, that’s a hell of a lot.