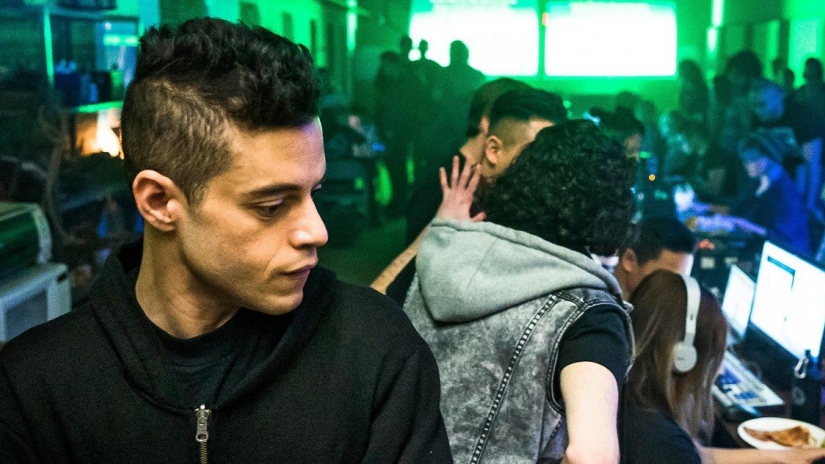 When it’s all said and done Mr. Robot may be the only show in history where I wouldn’t be completely disappointed if all of this was just in the main character’s head the whole time.

Okay, that’s probably not true. The ‘this was all a dream/hallucination/snowglobe’ hasn’t been attempted in a meaningful way since St. Elsewhere in 1988 and rightfully so. It’s cheap and it undercuts rule #1 in the television Hippocratic oath: What you’re seeing matters.

Still, on Mr. Robot we often have a very little meaningful concept of exactly what we’re even seeing. Elliot is beyond an unreliable narrator. He’s an unreliable everything. He’s a former drug addict, inhumanly brilliant, and quite literally insane.

All of this – Evil Corp, global financial collapse, rolling blackouts, high-powered hacker syndicates could very well just be a fleeting thought Elliot Alderson has as he passes an advertisement of a robot on his way to the bodega.

It won’t be of course because how could it be. Creator Sam Esmail is too smart for that.* What’s important, however, is that Mr. Robot feels like that could really be what’s going on in the undercurrent even if we’re all resolutely confident it isn’t. This is a gorgeous, at times philosophical show, that almost always feels like an extended hallucination.

*Be sure to bookmark this review and come back to it after the series finale if it suddenly seems hilarious.

Season 2 of Mr. Robot took some well-deserved hits here and there. I enjoyed it but I empathise with people who didn’t. The ‘extended hallucination was both very extended and aggressively hallucinatory. The first half of the season represented an actual hallucination that Elliot experienced in which he was in prison but didn’t realise it. Weirdly enough, however, in the second half of the season Elliot knew he was no longer in prison and had a better handle on his reality and yet the fabric of the narrative’s reality somehow felt even more tenuous. Perhaps because it came on the heels of the big prison fantasy but the second half of season 2 was truly inscrutable at times.

We’re reminded of this in the ‘previously on’ segment of season three. We’re shown again the moment when Elliot finally reunites with Tyrell Wellick after not seeing him (outside of an Alf-centric sitcom fantasy) for literally the entire season. It’s so… surreal. Wellick seems “off,” the weather seems off, Elliot seems off. Wellick recites William Carlos Williams’ The Red Wheelbarrow for seemingly no reason. Then Elliot tells him “You’re only seeing what it’s in front of you. You’re not seeing what’s above you.” I….what does that mean. WHAT DOES THAT MEAN, ELLIOT??!?!?!? It’s significant enough to be the first item in the previously on segment.

In hindsight I’m even more impressed by the intense and dedicated weirdness of season two. At the same time, it was clear that it was high time for at least a little bit of clarity. “Power Save Mode”* obliges.

*A note on episode titles again this year. Mr. Robot rather creatively likes to title its episodes in the format of file names like so: “Eps3.0power-saver-mode.” While I admire the ingenuity behind a cleverly-formatted title, I’m going to address each episode by its phonetic pronunciation in my reviews for convenience and readability’s sake.

It’s hard to call any episode of Mr. Robot conventional, but Power Saver Mode is the closest we’ve had in a long time. And honestly, for as much as I’ve enjoyed the mystery of it all, it’s nice to start off season three with a bit of clarity.

This premiere does a pretty studious job of setting up where Elliot and his creator Esmail want to go this year. We open, as all things should, with Bobby Cannavale. Mr. Robot wouldn’t be Mr. Robot if it didn’t open with a character we’re unfamiliar with. Thanks to Cannavale’s truly dedicated and having-the-time-of-his-life-performance we’re able to recognize the archetype very quickly. He’s the fixer.

One thing I’ve always appreciated about Sam Esmail is he knows how to nail the big moments. That is to say he’s particularly invested in big narrative milestones like beginnings, middles, and ends. I’d be surprised if he hadn’t had this fixer vignette planned for a long time. Irving (supposedly the name of Cannavale’s character but who knows) tries to get his free shake at new BBQ joint The Red Wheelbarrow but they won’t redeem it on the same visit. He has to leave and come back to get his milkshake next time. Irving is not pleased with this and makes this known in a subtle, yet threatening way.

“It’s not about the money, it’s about the principle,” he says. It is a silly cliched line directly from Chris and Jonah Nolan’s first Dark Knight script but it’s clear that Cannavale has been waiting his whole career to say something like it and he just nails it. After making that point, whatever it was, Irving is called by a desperate Tyrell Wellick to save Elliot. Irving arrives, cool as all hell, and Winston Wolfs the situation so that by the end we still have a living main character to follow.

This is a perfect introduction as it introduces us to someone new (and cool), and then inserts him seamlessly into the most important ongoing plot line on the show. And if that weren’t enough, we then are treated to the ostensible “Big Bad” of the series, Whiterose villain-monologuing and adding a near unprecedented amount of clarity to the ultimate goal of the Dark Army.

Whiterose recognizes that Elliot has something all the other hackers will never have. Righteous, unrepentant rage. “Time presented us Mr. Alderson when we needed him,” Whiterose says. “His will must be our guide.” She then says they can kill him shortly after their plan succeeds as the camera pans ominously over to a giant nuclear reactor.

No, we don’t know what Dark Army ultimately wants yet or what their precise relationship to Evil Corp is but even just knowing why Dark Army needs Elliot and that their ultimate desires may be destructive puts the overarching plot on more solid narrative ground than it ever has been.

Of course, there are some artistic concessions that must be made in the service of all this clarity. For as good as the opener is, it does come along with objectively cliched dialogue.

The midsection of the episode in which Elliot finally realises that his hack has made the world worse, not better is equally clunky and necessary. “I didn’t get rid of the invisible hand. I turned it into a fist that punched us in the dick,” he says as he walks down a Midtown street surrounded by clear signs of the financial apocalypse. “I didn’t start a revolution. I just made us docile enough for their slaughtering.” This is accompanied by some footage of candidate and eventual President Trump appealing to the country’s basest and most primal instincts because how on Earth could Sam Esmail not?

Elliot’s extended monologue here is too on-the-nose to be fully satisfying or as cool as the editing and direction want it to be. It places all the cards on the table in a way the show has not yet. It was easy to glean from season two that things were not going well post-5/9 attack but again: every is so hallucinatory on this show that it’s kind of nice to have an easy-to-understand declarative statement about how badly Elliot fucked up. Even if it is overly-expository. True to form, however, Elliot walking down the streets turns out to have been yet another fantasy as he just stays shell-shocked in the Red Wheelbarrow until it closes following his meeting with Irving.

Moments like those are a necessary evil because Power Save Mode is all the better for it. And I expect season three will be made better for it too. The post-gunshot wound Elliot of season three has a clear purpose: undo the damage he’s done. He begins by closing the backdoor Mr. Robot had opened to make stage two possible. This is accomplished at an underground internet… club? since New York hasn’t had power for going on a week. Elliot and Darlene’s excursion into the seedy underbelly of hackerdom is Mr. Robot at its best. When Elliot is handed video game-esque side quests in order to continue on his main mission, the show tends to excel.

The show also excels when it is giving its non-Elliot characters plenty to do. Darlene’s panic attack upon seeing the Dark Army in the hipster Wi-Fi dungeon is uncomfortably palpable. It calls to mind just how brutal the diner attack from last season was. And then the other woman in Elliot’s life, Angela provides the episode with its biggest shock and least conventional and clear angle yet.

Angela sometimes had a difficult time fitting in season two. There were so many factions at play and she couldn’t quite seem to figure out what her motivations were. That changes pretty conclusively with Power Save Mode. She’s with the Dark Army and Mr. Robot. She is valuable to the Dark Army as Elliot/Mr. Robot’s handler because let’s be honest: he really needs to be handled.

This creates a bizarre and heartbreaking scenario in which Angela is betraying her best friend and potential lover by… helping her best friend and potential lover. I think a lot of people assumed Christian Slater as Mr. Robot would bounce after it was revealed he was a hallucination/alter ego in season one, Tyler Durden-style. Season two suggested at times why the show didn’t let him go but now, just one episode into season three it’s even clearer.

It can be hard to glean just exactly what Mr. Robot is about. Now, thanks to an unusually confessional and open premiere it’s clear that at its core the show is really just one of the only three stories you can tell: Elliot against himself. Only in this case. Elliot is against himself and… his other self.