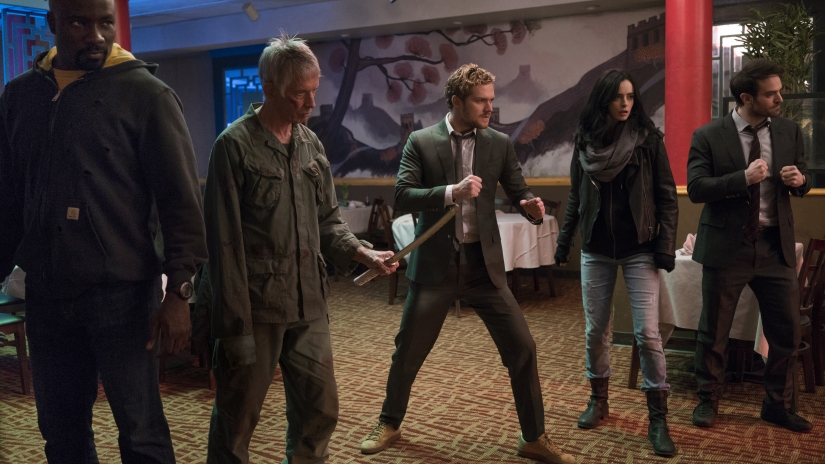 The Defenders hit Netflix on August 18, and it looks like Marvel's Netflix shows are back on track, say our US chums…

This review is based on the first four episodes. It contains NO spoilers at all!

If you had any worries at all that Marvel’s assorted Netflix series were losing their way a little bit, the first four episodes of The Defenders should put those fears to rest. The Defenders is only eight episodes, while all four previous Marvel Netflix shows clocked in at thirteen each. There’s been ongoing debate about whether these shows would be better served with runs of ten episodes as opposed to thirteen, and even the very best of them (a few episodes aside, they have yet to better the first seasons of Daredevil and Jessica Jones) have a tendency to spin their wheels a little around the third act, occasionally giving the impression that there’s not quite enough story to get all the way to end. Most of the time you’re so busy being wowed by the performances or just how cinematic these shows look that you can forgive just about anything, although in some cases, notably the lacklustre first season of Iron Fist, a few hours can turn into something of a struggle.

But The Defenders doesn’t have any room for filler with eight episodes. The show needs to get four heroes who (with the exception of Luke Cage and Jessica Jones) don’t know each other, who have very little in common, and less reason to even be aware of each other’s existence, let alone work together, to meet. You might just be willing to forgive The Defenders if it decided to rush into things and find a convenient excuse to put Matt Murdock, Jessica Jones, Luke Cage, and Danny Rand in a room together and send them off to the ninja beatdown party.

It’s remarkable, then, that The Defenders doesn’t appear to be in any rush at all. It wouldn’t make any sense for it to be, since Daredevil waited a full season to put its title character in something resembling his iconic costume, and his three superheroic partners in crimefighting don’t even bother with little formalities like secret identities or masks. The show is willing to wait, and as a result, make the audience wait, but the impression is never that it’s stalling, but rather that it knows exactly where it’s going at all times. Don’t worry, because when they finally do unite for the first time, it’s an absolute blast.

The opening two episodes almost function like additional chapters of each hero’s own show. We meet Luke Cage at least a few months after the end of his series, and when he’s on screen the warm lighting, Harlem locations, and hip hop soundtrack recall his show perfectly. While Jessica Jones’ scenes lack the horror movie-levels of tension necessitated by the existence of Kilgrave in her series, everything else is just as you expect, and her solo sequences could just as easily feel like the first minutes of Jessica Jones season two. The scenes dealing with Matt Murdock and friends are unsurprisingly seamless with his series, since Daredevil season two showrunner Marco Ramirez is handling showrunning duties here, too. Unsurprisingly, the overall aesthetic does feel like it owes more to Daredevil than any of the other series, but that’s to be expected, and it works to everyone’s advantage.

Perhaps the biggest surprise comes from Iron Fist. Finn Jones’ Danny Rand is right where we left him at the end of his maligned series, perhaps a month or two down the road. But while Danny spent much of that show as a frustratingly irresponsible (and at times downright unlikeable) hero who didn’t grasp the enormity of his responsibilities, when we meet him in The Defenders, he’s haunted by what he witnessed in K’un-Lun, and truly driven to hunt down The Hand.

Danny Rand and Colleen Wing are front and centre early on, and the Iron Fist story is as crucial to the main thrust of The Defenders as the holdovers from Daredevil. It makes sense, since elements of Iron Fist were seeded as far back as Daredevil season one, that their stories would be intertwined this way. The problem is that Iron Fist failed to fully carry over the sense of mystery and menace of The Hand that we saw in Daredevil, but in The Defenders, these characters and concepts feel far more at home. They’re darker, more violent, and even more richly photographed. The fight sequences are better, and Danny’s personality plays well against Jessica Jones and Luke Cage, neither of whom have any time for bullshit. If nothing else, it’s a step in the right direction for the character. It’s something of a relief, considering that we have four heroes and their attendant supporting casts (all the key players are present and accounted for) that the only major new character introduction we get here is a mysterious woman named Alexandra, perfectly underplayed by Sigourney Weaver. Alexandra is soft spoken and elegant, apparently far older than her years, and wields power over The Hand and all its mystical elements that immediately ups the stakes far beyond what we’ve become accustomed to.

Luke Cage was primarily a neighbourhood concern, Jessica Jones was intensely personal, while it was up to Daredevil and Iron Fist to take on what we knew would be the central threat of The Defenders once it got here. It’s quickly apparent that Alexandra is the kind of next-level threat it would take to bring a group of heroes together, but Weaver plays her with such quiet authority, and the air of mystery is so perfectly preserved, that it says far more than what we’re seeing on screen. The mystery of Alexandra’s identity is what really drives this, overshadowing whatever it is The Hand are actually up to, but it makes for a compelling mystery.

Some of the usual problems with these shows are still hanging around, though. There’s a tendency for some of the dialogue to feel a little overwritten and if you haven’t familiarised yourself with at least one of these shows (preferrably Daredevil or Iron Fist for the big picture), you’ll be left in the dark. The occasional nod to other events, and a couple of recurring characters aside, there’s no reason the other four shows couldn’t be watched as standalones. That isn’t the case with The Defenders. Then again, I don’t think it’s necessarily expected that a viewer be intimately familiar with nearly sixty hours of previous TV. But this is the norm now with superhero storytelling of this scale, whether we’re talking about The Avengers on the big screen or our beloved crew of Hell’s Kitchen irregulars. Marvel knows what they’re doing, and if you aren’t already on board, you were probably planning on skipping this one anyway.

But anyone who has enjoyed the other Marvel Netflix shows most certainly won’t want to skip The Defenders. That big screen/prestige TV feel is back in full force here, and there’s no shortage of fun when the team finally gets to kick some ass together. Want to know what it’s like when Jessica crosses paths with the not-having-any-of-your-crap Misty Knight? You’ll find out. Ready for the first, admittedly unfriendly, meeting between one of the most legendary friendships in Marvel history, Luke Cage and Danny Rand? You’re in luck. Oh, and prepare yourself for what might be Charlie Cox’s best moment as Matt Murdock (not Daredevil) early in the first episode. The Defenders takes its time, but it doesn’t waste any.

The Defenders arrives on Netflix on August 18th