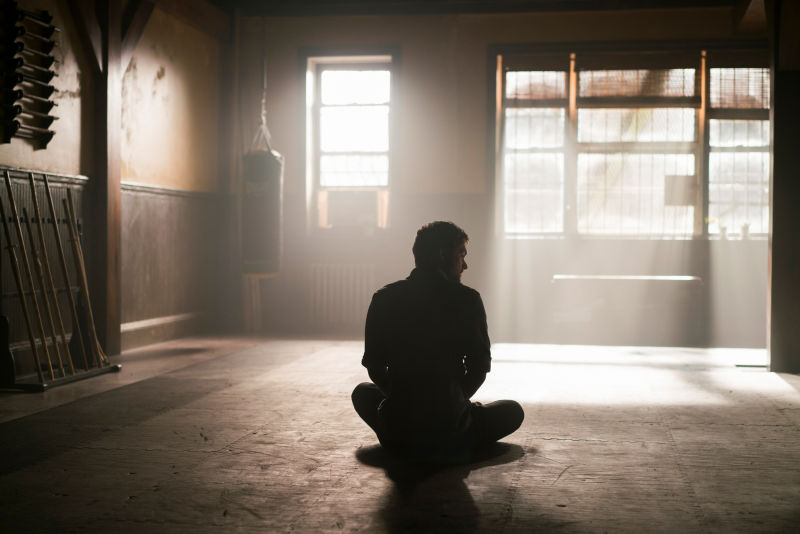 Our daily look at Marvel's Defenders reaches the finale, which, it's fair to say, is a very mixed bag…

If you’re reading this, that probably means you’ve seen the finale of The Defenders. And if that’s the case, I almost wish I had a helpline number for you to ring. Unfortunately, while there were things in it that worked – Matt’s sacrifice, Luke and Jessica reconciling, Foggy and Karen realising Matt wasn’t coming back – there was so much that didn’t that it’s hard to know where to even start discussing it.

How about let’s start with this: what, exactly, did the characters achieve by bringing down Midland Circle? They certainly didn’t end the threat of The Hand, because we already know The Hand is everywhere. Sure, they’re weakened now that a bunch of their leaders are dead, but the building was already empty and Gao is still out there, as are a trillion ninjas of wildly varying competence. The destruction of their headquarters arguably works as an emotional beat – though I question the intelligence, even sixteen years on, of presenting the destruction of a high-rise building in New York as a triumphant act – but on a technical level, what did it mean?

We’re told that the team bringing down the building means that New York was saved, at least, but there was nothing in the show that explained how and why New York was under threat bar a single earthquake, which turned out to be foreshadowing for nothing. We all saw 8 episodes of Defenders, but can we explain what caused that earthquake? Was it a mystical quake caused by the disturbance of the dragon skeleton? Was it The Hand trying to open the seal? Or was it because digging the hole had upset the city’s bedrock? Any of these explanations could be true. If you know which one, please tell me how you arrived at that conclusion, and crucially, how blowing up a building solved that problem.

At best, the team has temporarily prevented The Hand from excavating the dragon, but it’s still accessible to anyone with the right drilling equipment. We could argue that bringing down Midland Circle has saved the city by giving The Hand other things to focus on – except that’s a side-effect, rather than the intended plan. If you think back, you’ll find that the entire reason anyone decided to blow up Midland Circle was because they saw that a dead architect was planning to do it and figured he must have had his reasons. And that wasn’t even the main cast – their plan was just go in, get Danny and then leave before they could use him to open the seal. In fact, when they went to confront Elektra, they didn’t even know Alexandra was dead, so they weren’t even looking for the right villain.

But let’s assume for a second that bringing down Midland Circle was immaterial to the story. What about the character arcs in this show? Did Danny Rand get to fulfil his destiny and destroy The Hand? Like – and I use this language knowing we’re not supposed to swear too much on Den of Geek – fuck did he. Did Luke eliminate the cancer afflicting Harlem and save the kids being recruited off the street? No. Did Jessica achieve closure for the man whose disappearance she was investigating? Off screen, perhaps, but in the show? No. Did Matt resolve his struggle between his addiction to vigilantism and his attempt to become a law-abiding citizen? Well no, because he chose to sacrifice himself instead, which is the ending of a different story. Hell, did the four characters even decide to team up and protect New York as a team in the future? They did not!

So what, exactly, was the story Defenders was telling? What’s the arc? Why draw us in with personal stakes for each character if you’re not going to resolve them? The individual pieces of Defenders are broadly entertaining and engaging, and it gets away with a lot on the sheer charisma of its cast – but if you attempt to understand each scene as the progression of any kind of coherent story you’re dooming yourself to frustration and disappointment. Each moment of promised plot and character development seems to simply disappear, like breath in fog.

I genuinely wonder if I’m just completely out of touch with modern TV storytelling, and that maybe writers and viewers aren’t interested in constructing arcs, themes, protagonists, antagonists, and all the other bits that make up a coherent, digestible story as opposed to just a meandering trudge through “what happens next?”. Nothing says that more than their hiring Sigourney Weaver to stand around for 6 episodes so that she can be dramatically killed off early. Even on a bad day, EastEnders can manage to get people from A to B without you having to forgive a parade of logical inconsistencies. Am I so out of touch?

Here’s an example of a story that does work: Go back to the start of Iron Fist, and Colleen Wing is a Hand graduate, taking her place in society and poised to become an instrument of power for the cult she’s been indoctrinated by. Eventually, she betrays her master and mentor Bakuto, deciding to help Danny, and is drummed out of her family as a result – a loss which traumatises her even as she tells herself its for the best. She doesn’t know her place in the world. The people she loved are now trying to kill millions. Bakuto returns, offers her the chance to start afresh, and join his quest for destruction. Seeing his evil face to face, she definitively rejects and kills her master, and finds her place in the world: alongside Danny.

And that’s a story. But here’s the problem: It only works if you draw a line from the start of Iron Fist to the end of Defenders. If you came in at the start of Defenders, you’ve got no idea she used to be in The Hand until she meets her old boss in about episode six, and then she kills him two episodes later. It means almost nothing, because it’s the ending to a story that began and was mostly told somewhere else, and she’s not even one of the leads of the show.

I feel like I could go on. Was that dragon Shao Lao, and if so why was it under New York rather than in K’un Lun? Why did they end the show with a fight that takes place almost entirely in the dark? What happened to Matt being the guy who’d have to lead the fight against The Hand in Danny’s place? What happened to Luke needing to learn to stop holding back? What happened to Danny using his corporate interests to fight The Hand? If all Gao wanted was to get back to K’un Lun, whose hand ninjas attacked the city quite easily in Iron Fist, and what has she been doing for the last few thousand years? Why did the show apparently forget its own mythos?

And most importantly, why, when you’ve got three characters with variations on super strength, do you have them destroy a building with bombs instead of doing the cool thing and using their powers together as a team? You know what would’ve made viewers think “Hey, Iron Fist is actually awesome!” – if he punched a building so hard it fell down. Is there literally anyone here who thinks that wouldn’t have been a cooler way to destroy Midland Circle?

And hey, how good a set of lawyers must Hogarth, Chao and Benowitz be to get the people who escaped custody, destroyed a police station, stole evidence, seemingly kidnapped their lawyer – who subsequently went missing – and then at the very least are the prime suspects for BLOWING UP A BUILDING IN MANHATTAN – off without charges? There’s suspension of disbelief, but that development wouldn’t have been any less conspicuous if it involved Foggy putting on his wizard hat and robe then tapping a wand on his briefcase and declaring “Izzy whizzy let’s get acquitted.”

In all honesty, I no longer understand what the Netflix shows are trying to do, and I wish like nothing else that I could enjoy them to way some people seem to. Because even with its truncated run time, even with the caveat that it had a great moment in every episode and was head and shoulders above most of the Netflix stable, Defenders was an inconsistent mess in which some great actors and great characters were repeatedly failed by a production that seems to think tone is an adequate substitute for story. It doesn’t make me angry. It only makes me sad. The final scene with Daredevil is taken from Born Again, which ran in Daredevil #227–231, and the story of how Misty Knight lost her arm in the comics can be seen in Iron Fist #6 (1976).