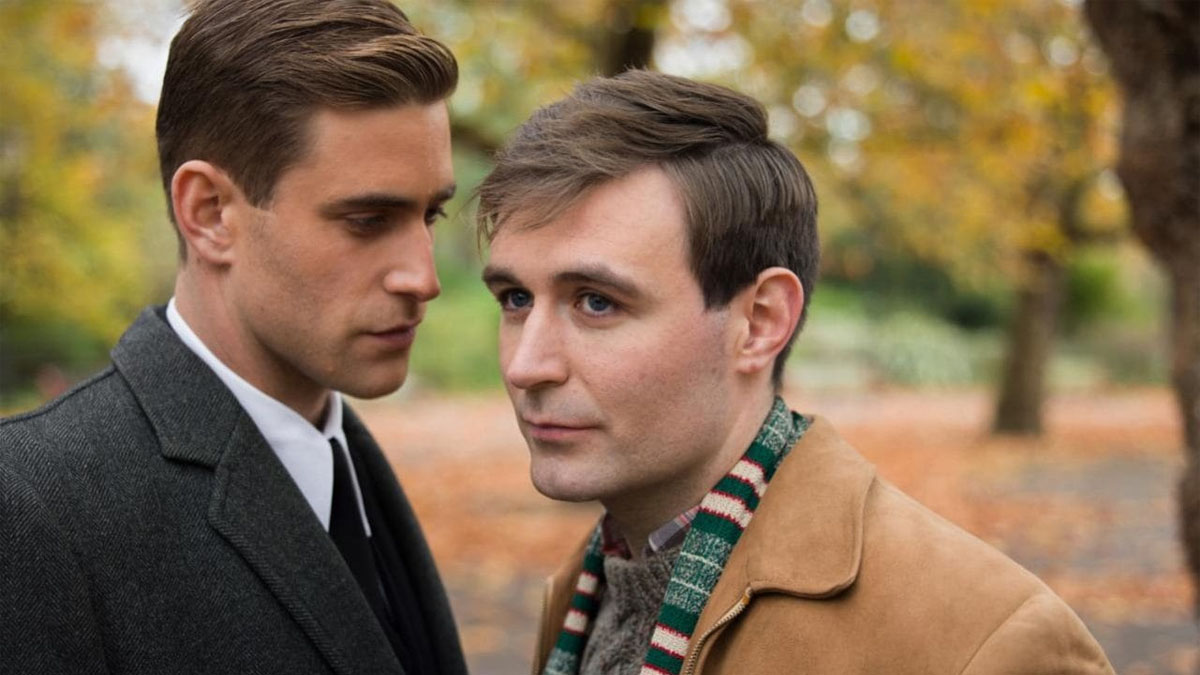 The BBC delivers another moving drama in their ‘Gay Britannia’ season, a month of programming that celebrates the 50th anniversary of the Sexual Offences Act of 1967 that began the decriminalisation of homosexuality in the UK.

Vanessa Redgrave stars as Flora Berryman, a widow and grandmother whose life story takes centre stage in the first instalment of a two-part drama. This first story takes place towards the end of the Second World War and offers an insight into the life of the young Flora Talbot (Joanna Vanderham), her marriage to Michael Berryman (Oliver Jackson-Cohen) and Michael’s secret love affair with old school mate and fellow soldier Thomas March (James McArdle). Part two promises to tie up Flora’s story as, back in the present day, her grandson Adam (Julian Morris) struggles to tell his granny about his sexual orientation.

Michael Samuels’ Man In An Orange Shirt is a very watchable drama that explores both the thrill and, ultimately, the tragic impossibility of a homosexual relationship in 1940s Britain. The narrative is based on script writer Patrick Gale’s own parents, although he owns that he made his on-screen parents confront his father’s homosexuality whilst, in reality, his mother never voiced what she knew to be true. The two part format, spanning from the 1940s to 2017, will not only serve to demonstrate the different attitudes and issues facing gay men in two different eras but also requires that Gale alter his own role from that of Flora’s son to grandson as he loosely tells the story of coming to terms with his own sexuality in light of his parents fraught relationship.

Despite a strong central story, there is no escaping that Man In An Orange Shirt is a TV movie. Whilst it is compelling enough to want to know the story’s outcome, and indeed to consider catching the second part of the story, it is just not clear what this drama is trying to be on a stylistic level. Unlike Gay Britannia’s previous drama, Against The Law, it would initially appear that this drama would rather call cut before any steamy same-sex action. This is, of course, a fair choice so long as it is employed consistently. What unfolds, however, is a passionate relationship played out awkwardly within the confines of a Sunday tea time drama that occasionally lurches out of its chosen comfort zone with a little bit of nudity here and an f-word there.  This is not the only time the script lets down the story either, with a somewhat contrived walking-and-talking explanation of the law between Flora and sister Daphne (Laura Carmichael) and often clunky and on-the-nose dialogue that includes an amusing outburst from Flora at the announcement that the war is over: “no more bloody war!”

The performances of the talented cast are to thank for eradicating further awkwardness from the script. Oliver Jackson-Cohen delivers by far the most naturalistic and understated performance of the piece, excellently portraying a man who feels dutiful to his wife whilst being hopelessly in love with a man and indeed the idea of an entire life that he knows cannot be. James McArdle, meanwhile, plays the bohemian Thomas with conviction and contributes to a very realistic on-screen couple, although in times of hardship there is some definite scenery chewing afoot. Joanna Vanderham very ably portrays a heartbroken woman whose life is plunged into the realms of the unknown and the illegal and whilst at times her hurt can come across a little more on the side of manic, she is at her best in an amusing and heart-warming family scene near the drama’s end.

Man In An Orange Shirt makes less of the social and political climate and focuses more on the story of those intimately affected by a secret gay affair, placing it nicely alongside other recent dramas that focus more attention on the danger of being homosexual before 1967. There are some deeply moving moments that consider the roles of marriage, romance and duty in the lives of post-war couples and an ending that will encourage you to watch the second instalment, if only for closure. Let’s hope we get some well phrased answers.