Looking back at Jackie Chan’s Project A movies 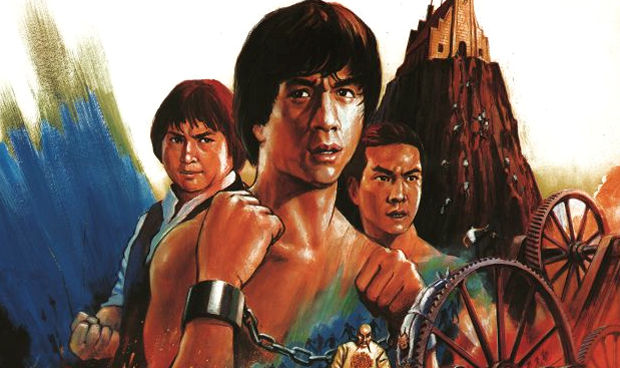 The martial arts master Jackie Chan made some amazing movies. We take a look back at the superb Project A series…

It’s a mystery to me why Jackie Chan appears in so few Greatest Director Of All-Time lists. I mean, sure, he’s a household name and any martial arts enthusiast, no matter how deep or casual, will be quick to let you know how good he is at fighting. Yet, outside the genre fandom, he rarely seems to get the respect he deserves as a filmmaker. Perhaps the problem is that two of the most critically dismissed or maligned genres in film are action and comedy, which also happen to be the two things Jackie Chan does best.

Chan’s work as a director is a small part of his overall filmography (less than a tenth of the movies he appeared in) but the run of films between 1983 and 1991 – his most prolific era behind the camera – is as strong as it comes and shows a master so phenomenally in control of his work, it still dazzles. A good introduction to Chan’s golden era, for the curious or the sceptical, would be his two Project A films (1983 and 1987 respectively).

The first one was shot after Chan’s early attempts to break Hollywood (which I wrote more about here) and the relative failure in Hong Kong of his directorial effort Dragon Lord (1982). Times were changing and, frustrated by an inability to really communicate the full extent of his vision, Chan approached Golden Harvest boss Raymond Chow with a new idea, requesting complete creative control on an ambitious big budget film he was certain would succeed.

There hadn’t been a film quite like Project A before. It was originally going to be called Pirate Patrol but, fearing that the ever-speedy HK film industry would put something similar and worse out first if they caught wind of what it was about, Chan decided to keep the title as vague as possible. This seems over-cautious in hindsight since it’s crazy to think anyone else would’ve even considered attempting a full-blown lavish 19th century martial arts comedy about pirates. But then, Jackie Chan is no stranger to crazy. Here, he plays Dragon Ma, a plucky coast guard in colonial Hong Kong whose unit sets out to stop a group of murderous pirates, led by the evil San-Po (Dick Wei). However, the city is rife with corruption, the coast guard are at war with the police and every wall has ears. When following protocol gets him nowhere and a good man is hard to find, Dragon teams up with hardass police inspector Tzu (Yuen Biao) and loveable rogue Fei (Sammo Hung) to tackle the pirates head-on. It’s a simple plot but one that manages to generate enough emotional resonance to carry itself, thanks to some rousing speeches from Chan and an earnest approach to a classic good versus evil narrative. But really, the story’s a foundation on which to build everything else that makes Project A so stunning.

On a technical level, it’s exceptional. The attention to detail is meticulous, to the point where Chan and co trained with the Hong Kong police force to ensure they got their marches right, and touches like this are backed up with an immersive production design. Visually, it blends real life historic locations like the original Hong Kong police station with elaborate studio-built sets and an actual friggin’ pirate ship. This bit is enormously impressive, especially when you see the cast do their usual gravity-defying precision martial arts while the boat rocks from side to side uncertainly… And the brawls are all first rate throughout. With three of the greatest onscreen fighters of all time at the forefront (Biao, Hung and Chan), these scenes are a treat to watch. Beyond the dynamic, modern martial arts on display, the stunts are off the scale complicated, dangerous and exhilarating. Chan’s adoration of silent cinema comes to the fore here, blending action and classic comedy like never before. I have to admit, I had no real appreciation for the likes of Harold Lloyd or Buster Keaton prior to watching Chan’s films but learning more about how they did what they did and seeing them through his eyes, it’s easy to see how incredible and obsessively daredevil they were. Like Chan, they may have been trying to make the audience laugh but there’s definitely nothing funny about the astonishing physical feats they achieved while doing it.

In Project A’s most memorable scene, Chan pays direct homage to Lloyd’s famous Safety Last! stunt. While Lloyd hung from a mechnical clock on a stunt tower that dangled him a few feet off the ground (creating the iconic effect by clever illusion), Chan goes one better and – wearing handcuffs! – hops his way up a flagpole into the clock tower, has a fight at the top, escapes out the window and dangles from the face of the clock before dropping three stories down onto the ground and landing on his head. I have absolutely no idea how he isn’t dead. I mean, he lands ON. HIS. HEAD. Man should be dead.

But he didn’t just live. He did the stunt THREE TIMES (all of which are shown in the movie). The third take was purely because he had an afterthought that it would be a better scene if he could get up at the end, rub his head and wail “I’ve proved one thing at least! There is such a thing as gravity!” – absolutely insane. It’s almost impossible to watch this stunt and not experience SOME kind of reaction. This all combines to make Project A a ferocious piece of entertainment. To seamlessly blend silent slapstick comedy, high-octane action, swashbuckling adventure, Hong Kong period drama and modern fighting is a challenge but Chan made it look easy. The film smashed the box office at the time, launched him into superstardom across Asia and was unlike anything that had come before. And, as if that wasn’t enough, he managed to deliver a sequel not just worthy of the original but possibly even more intense and action-packed.

In Project A II, Chan reprises his role as Dragon Ma but this time he’s given a land-based assignment and sent to the Sai Wan district, a ghastly place where the cops are as crooked as the criminals. Thanks to the lawless squalor, it’s also hotbed of revolution in which a group of plucky young rebels (including Maggie Cheung) plot to overthrow the oppressive government. Dragon’s mission is to clean up the neighbourhood, and to make things even harder, a bunch of pirates who worked for San-Po have fished themselves out of the sea after their defeat in the first film and are hungry for revenge. Project A II gets a bad rap in that it’s a sequel to such a beloved fan fave. Admittedly, it’s a high bar to leap, but I think, if anything, Chan’s creativity was even more feverish at this point. If the film has a flaw, it’s that there’s just too much to take in. On top of the chaotic plot – which has at least one set of characters too many and doesn’t follow through on the simplicity of its new-sheriff-cleans-house concept – the stunts come so thick and fast, you don’t even have time to appreciate them all. Seriously, there are so many stunts per minute (per second in some scenes!) that I found myself getting a little jaded at times and not really noticing just how amazing they were. Almost every single movement from Chan and his team in any of the major fights or chases is something that would physically wipe me out and yet they throw these moves out like they’re nothing and run headlong into the next one.

There are some genuinely magnificent set-pieces too. People say there’s nothing as audacious as the clock stunt but the final fifteen minutes of Project A II are jaw-dropping – a boggling ladder stunt, a bruising battle in a rotating cage and a rip-roaring homage to Buster Keaton’s falling house stunt are all vintage Chan. A lot of the comedy works well too, from the Marx-inspired farce scenes (which show Cheung at her funniest) to the hilarity of Chan fighting dirty with a mouthful of chili peppers (apparently actual, real chili peppers – the pain isn’t faked!), it’s guffaw out loud stuff. The tonal switches are handled with expertise, ensuring that even though you’re invested in the action heroics, the laughs come naturally. If it’s missing anything, then Yuen Biao and Sammo Hung’s absence is all you could argue but you’ve got legendary Wai-Man Chan (as bad dude Tiger) and superstar Maggie Cheung instead so this is more than adequate consolation. To criticize Project A II for being a bit extra is at least the best kind of criticism to throw at a film. You can’t ever say it ever slacks off and, for the most part, it’s top class entertainment from a filmmaker without equal, just like the original. I don’t think anyone’s ever emulated Chan’s hands-on, master-of-all-trades approach that he took to directing in the 80s. While I know I’ve alluded to it throughout this, it’s reductive to suggest that he only did all these things because he had a screw loose or a death wish. What he had was a creative mind for the best, most crowd-pleasing stunts imaginable, the physical prowess to carry them out, the technical expertise to film them and the drive to do it all better than anyone than else.

To make films in the calibre of the two Project As is something most filmmakers can only aspire to but to throw yourself off a clock tower onto your head three times while doing it? That’s uniquely Jackie Chan.