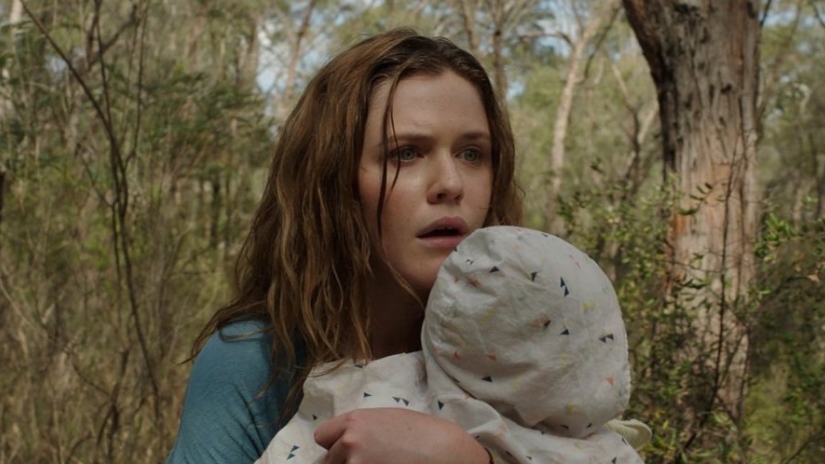 The Australian horror film Killing Ground has a lot of great performances, but it doesn’t quite deliver on its promise…

There’s no denying that Killing Ground is an impressive debut feature. Writer-director Damien Power, making the step up from short film, pens winningly realistic dialogue and always finds unique framing for his shots. The stylistic stuff is nicely done, but the substance it’s wrapped around leaves a bit to be desired.

The basic set up isn’t really the problem, and it’s simple enough: two separate camping trips take place in the Australian wilderness, and neither group stays happy campers for long. Harriet Dyer and Ian Meadows put in highly likeable performances as Sam and Ian, a smitten young couple who take a tent to the beach and soon come to regret it. Julian Garner, Maya Strange and Tiarnie Coupland play a similarly adorable family, who had a similar idea and brought a young child along with them.

To start with, Killing Ground feels like the Australian tourist board could’ve paid for it. Idyllic landscapes are driven through, beers are bought, and tents are pitched in beautiful environs. Sam and Ian’s cutesy chemistry is so watchable that you half expect them to turn to the camera and tell you to visit Australia or buy a Fosters. But it soon becomes apparent that pitching their tent on this spot was not a good call.

It’s made blindingly obvious from the start that two local bar patrons are looking for trouble. Aaron Pederson plays German, a quiet brooding sort with a short temper. And close to his side is Aaron Glenane as Chook, an impressionable and somewhat creepy chap. A collision course between these shifty locals and the cheery holidaymakers nearby seems inevitable after the first few minutes.

Tension is built rather effectively, as Power showcases a knack for getting under the skin. Suspicions slowly pile up, things go wrong, and our protagonists show a relatable desire to keep the holiday on track. We’ve all been in that mind set at one point or another, so it’s easy to get sucked in by the early scares that Killing Ground has to offer. But when the film reaches its big confrontation, things take a turn that isn’t all that satisfying.

The final third fails to payoff the promise of the build up, skipping over certain segments – that would’ve been ripe for scares – in favour of getting to the more generic action elements. This approach means that tension dissipates instead of erupting, and the pace drops instead of picking up. The audience is primed for a terrifyingly plausible ‘holiday gone wrong’ horror, but what you end up with is nothing new.

Along the way, it must be said, there are some neat little moments. Power touches on themes of technology and how it separates us from real dangers. How much attention are you paying to the world if you’ve got one headphone in, or if you’re zoomed in on a picture on your phone? With a little more exploration, these ideas could’ve enhanced the overall experience of the film.

Praise must also go to the cast. Meadows and Dyer bring everyman/everywoman charm to their central duo, which is vital to getting us engaged. Meanwhile, Pederson and Glenane offer seriously sinister performances without chewing on the scenery. And youngster Tiarnie Coupland truly shines in a scene involving a car, which proves just how scary this film could’ve been if it didn’t zigzag around the horrific material.

Everyone involved makes the best of what they’re given. It’s just a shame that Killing Ground veers away from its unsettling opening to deliver an uninspired end. But still, it’ll put you off campsites for a while.