In praise of Dogwoof documentaries 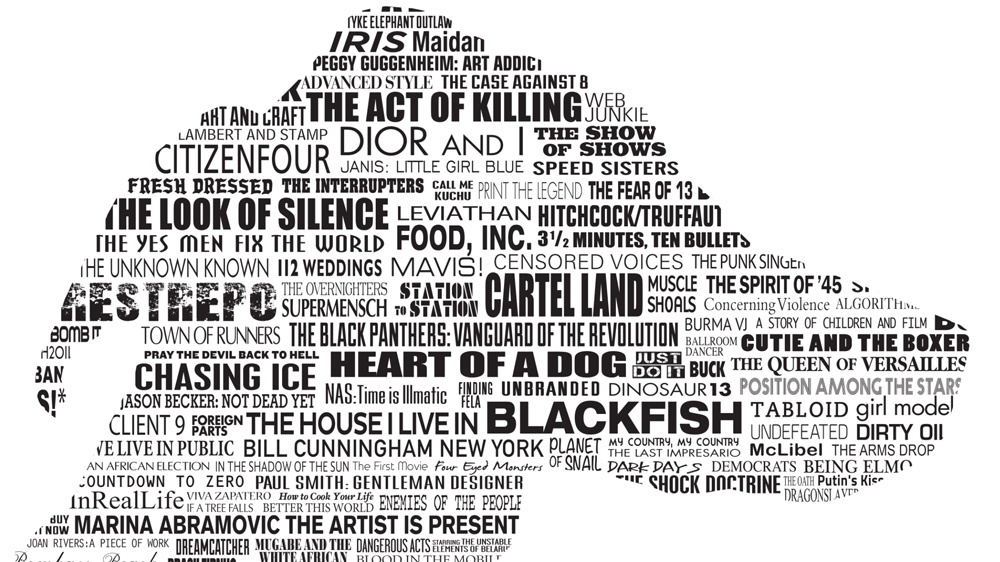 Blackfish, The Act Of Killing – we celebrate the great documentaries distributed by the UK's Dogwoof…

Did you know that around 20 percent of the films released in the UK are documentaries? It’s a surprisingly large figure. I think the reason behind it might be that ‘documentary’ is considered to be a genre in and of itself. “And the Academy Award for best documentary feature goes to…”. They’re all lumped into the same bracket. Also, they’re relatively cheap to make and can be assembled independently by a team of only a few people. Success at the box office is often down on the priorities list for creators wanting to spread a message, tell a story or get a point across and, when they only need to recoup that small amount to be considered successful, documentary cinema becomes fertile ground for ambitions to grow in.

We live in a world where seemingly everything is documented thanks to smart phones and the internet, and this appetite for ‘living history’, coupled with new, digital ways to get your film out to the masses has meant that the breadth of topic and quality within the ‘genre’ has grown exponentially and shows no sign of slowing down. Is it really fair to shove all these films under the same umbrella when they cover such a vast area of experience? Artistically speaking, probably not. But from a distribution point of view? Now you’re talking!

The distinct, barking (literally) logo for the company Dogwoof seems to appear every time I watch a feature documentary these days. It has become a seal; a mark of quality that what I am about to watch will stimulate me in some way. I imagine it is an exhilarating experience to work for a company that can acquire such varied material under its all-encompassing banner of “the leading sales agent and UK theatrical distributor for cinematic documentaries” as their website puts it. If you have a quick browse of their online catalogue you may quickly become overwhelmed with the range of what is on offer: literally a documentary for every occasion. Among them are (at the time of writing) 18 Oscar nominated films, a feat that seems much more astonishing when you consider the company was only founded in 2004 and did not begin concentrating on documentaries until a year later. So, quick maths, that’s 1.5 best documentary feature nominations per year of operation. Name me one other distribution company that can boast that!

“OK Dave,” I hear you say, “aren’t you getting a bit carried away? I mean, Dogwoof didn’t make all those films, did they?” Well, as the company has grown they have produced many a documentary too but I hear your point. They are essentially collectors, finding product they believe will sell and getting a license to distribute it. I would argue that this role becomes much more vital when dealing in documentaries. If we take another look at their website, they state their mission thusly:

“The company is regarded as the foremost documentary specialist brand in the world, and is a stamp of the highest quality content.”

“Our vision is to create the biggest true-stories powerhouse by vertically integrating production, international sales, distribution, and exhibition, focusing on the finest documentaries, documentary series and optioning rights for potential remakes.”

This is why I believe they deserve a shout out. This company has standards. In a realm where they are distributing true-life content, that becomes very important. Dogwoof are an umbrella. They invite people underneath for shelter whilst standing in the rain with a megaphone to continue to shout their message. They dedicate themselves to cataloguing truth. They have no political agenda, their selection process is meticulous and ground first and foremost in the ethics that they hold dear. They offer a nice, safe environment in which you can learn and offer a wealth of topics to feed your brain with.

So, where to start? Well, narrowing down the Dogwoof smorgasbord into a comprehensive list is a daunting task. It requires emitting many an amazing film purely to make space for others and is likely to spark furious debate amongst the followers of the documentary religion. Frankly, only an idiot would attempt such a thing. So here is my list of essential Dogwoof documentaries!

For me, the most essential film in the Dogwoof catalogue is this extraordinary work from Joshua Oppenheimer. Dealing with leaders of death squads in Indonesia, Oppenheimer interviews them about the killings they committed before offering them the opportunity to act out the murders in a film style of their choosing. The results are astonishing. This difficult, challenging, inventive documentary really has to be seen to be believed. You will not see a more heart-warming film in any genre than this chronicle of Kevin Clash, the man who has voiced and operated beloved TV puppet Elmo since day one. Clash reflects Elmo in many ways – a kind, quiet, shy individual who is brilliant at what he does and enriches the lives of many. It is hard not to be moved by his personal struggle. Bring tissues! Possibly the most famous film on the books, Blackfish has made headlines for having a direct effect on reality. Dealing in often distressing terms with the captive killer whales that took up residence at a Sea World in America, the documentary has actively caused profits for the resort to fall drastically since its release. It remains a gripping account of man vs. nature. One for people who believe that you cannot experiment within the documentary format, Kirsten Johnson’s unique take is assembled from footage cut from her many other projects. Presented without context, it plays like a sort of ‘self-assembly’ film, as you find yourself making your own connections within the unrelated segments. A revolutionary experience. Sometimes all it takes to make a good documentary is to gain access to someone nobody else gets to speak to, but to suggest that that is all there is to Laura Poitras’ film on Edward Snowden is to grossly underestimate the filmmaker. There is a sense of awe to be gained from seeing the story told directly by the source but Poitras does not simply point and shoot. Her follow-up film Risk (2016), showcasing Julian Assange, is anything but a cosy portrait. Documentaries have the power to shine a light into even the darkest corners of existence. Following the work of former abuse victim Brenda Myers-Powell as she acts as a care worker for girls caught up in prostitution and sexual abuse, this film offers hope within the bleakest of scenarios and champions a woman whose work would have gone largely unknown otherwise. Joyce Vincent died in her flat in 2003 but her body was not discovered for three years. This saddening film attempts to piece together the story of a woman who left distressingly little imprint on the world around her. Profoundly affecting, you’ll want to call everyone you love afterwards just to say “hey”. An award-winning trilogy that Dogwoof kindly sell together, these films follow the everyday lives of a family in Indonesia. A rich and warming insight into a culture many of us would never spare a thought for, it has been referred to as a real-life soap opera, though comparisons to our own hysterical nightly serials undersell the poignant effect of this wonderful project. A look at the fashion industry that has built up around hip-hop culture, Fresh Dressed is a hugely enjoyable, funky example of a documentary that sets out with no hard-hitting, world-shaking agenda but treats its subject with an infectious amount of passion and fun. One for anyone who has an unbreakable bond with their pets, multi-visual artist Laurie Anderson offers an experimental portrait of her dog Lolabelle. Deeply personal and yet identifiable and relatable, it is small, but will make a huge impact. Offering a relatable point of view for the immediate concerns of global warming, The Island President follows Mohamed Nasheed of the Maldives, the world’s lowest-lying country, and his fight to get his fellow leaders to take their fight against climate change seriously before his territory disappears underwater. A must see for anyone who doubts the effects an individual can have on global concerns. A conceptual piece on the commercial fishing industry in the North Atlantic, Leviathan features many a camera shot to make your jaw drop. Giving you a point-of-view perspective from often the craziest of places, it is like watching a cinematic magic trick unfold, but all the visual trickery never dampens its message. The touching tale of an autistic boy and his family who developed a technique for communication using Disney movies, this is a real life example for anyone who believes that the movies are, essentially, magic. How’s this for a meta-documentary? A film about a film critic! The life and career of the renown Roger Ebert is celebrated in this homage to a man who brought the art of criticism into many an American household. Even as you watch his health decline, he remains a likeable, opinionated gent. Rather pleasingly, the critics loved it too. Immediate access to recent history, the footage in Maidan is assembled from a few static cameras placed around the central square in the Ukrainian capital where civil unrest broke in 2013 and 14. Putting you right in the centre of the urgent action, it offers a valuable substitute for actually being there. The metal-loving brother of the lead singer in indie band The National follows them on tour in rather uninterested fashion in this funny and touching real-life version of This Is Spinal Tap. Perfectly capturing the often ridiculous nature of the modern rock lifestyle, it becomes more about the filmmaker than the band themselves, so you don’t even have to like their music to enjoy yourself. This meticulous account of the story of O.J. Simpson is nearly 8 hours in length but please don’t let that put you off. Trust me, you will not be watching the clock. A seminal work that connects the trial of one man to the position of black culture in America today, it offers even those familiar with the case a bucketful of new revelations. For anyone who is unfamiliar with the story, it is enough to make your head spin! Did you know that there is an all-female racing team breaking all kinds of taboos and boundaries in the Middle East? Of course you didn’t, and that is what makes this such a delightful documentary. For the most part, it concentrates on the girls themselves, their lives both on and off the track, and lets the politics speak for themselves. An uplifting account of girl power in action. Mark Cousins followed up his amazing TV series The Story Of Film: An Odyssey with this playful picture in which he links the behaviour of his niece and nephew with that of children in 53 different films from 25 different countries. A charming thesis engagingly presented. If Undefeated was the synopsis for a fictionalised film, you would probably give it a wide berth. It follows three players on a critically underfunded American football team and their relationship with their coach who gradually begins to turn the team’s fortunes around. A real shot of punch-the-air happiness caffeine. The outrageous, hilarious account of a disgraced American politician as he mounts a campaign to become mayor of New York. Playing out like a real-life version of The Thick Of It, you really couldn’t make it up!

So those are my choices. Feel free to recommend your favourite Dogwoof documentaries too. But please give due to the company themselves. They are a beacon of shining light and their attempt to build the definitive archive of true-life tales on film should be applauded. Dogwoof, we salute you.