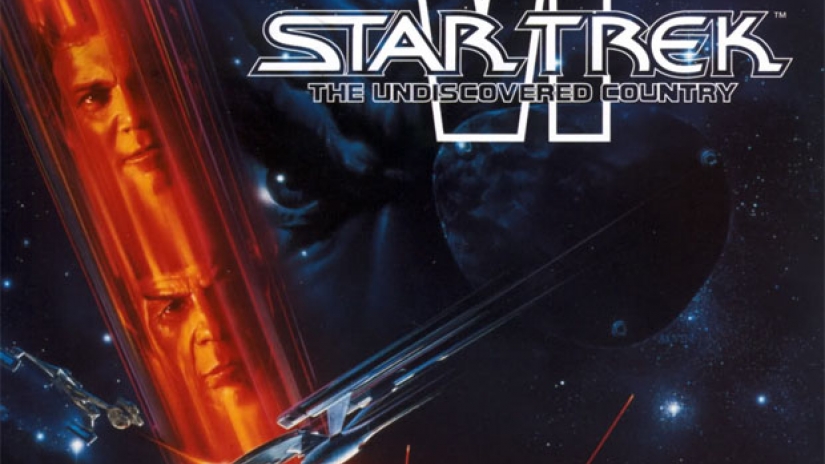 Here's how The Undiscovered Country feeds into Star Trek; Discovery. Spoilers for both ahead…

It’s well known that JJ Abrams, along with many other Trekkies, Trekkers, and people who sometimes watch Star Trek, is especially fond of Star Trek II: The Wrath Of Khan, and used that film as inspiration for his own take on Star Trek in the recent movies. The Wrath Of Khan is many people’s favourite Trek film, one of the best of the Star Trek movies, the source of the idea that the even-numbered ones are the good ones. Its themes, of death and rebirth, youth and ageing, fathers and sons, and one man’s drive for bloody, horrible vengeance are timeless and can and will inform many more Star Trek and other stories for years to come.

However, there is another very good even-numbered Star Trek film featuring the original series cast, in addition to the comic glory that is The One With The Whales (or Star Trek IV: The Voyage Home, as it’s more officially known). Consulting producer on the first two episodes of Star Trek: Discovery Nicholas Meyer directed two Star Trek films – The Wrath Of Khan, and Star Trek VI: The Undiscovered Country. While his well known and much beloved first Star Trek film has been, perhaps, over-used in the Star Trek universe recently, the team behind Discovery (Meyer himself included) have turned to his second Trek film to inspire their new series, providing a fresh take on the Star Trek multiverse. Star Trek VI: The Undiscovered Country is the last feature film to star all of the major players from the original series; Kirk, Spock, McCoy, Scotty, Uhura, Sulu, Chekov, and even Janice Rand makes another appearance here. (Kirk, Scotty and Chekov would later appear in Star Trek: Generations and Leonard Nimoy’s Spock Prime in the first two Abramsverse films, but the whole team was never brought together on screen again). Fittingly, for the end of the original crew’s journey, it tells the story of the end of the cold war between the Federation and the Klingon Empire that had been rumbling on in the background throughout the original series – but that viewers knew, thanks to Star Trek: The Next Generation (which had already been airing for several years) would not last into the twenty-fourth century.

The film’s plot is relatively straightforward. Spock volunteers his old crew to escort the Klingon Chancellor to peace talks, but the Chancellor is assassinated along the way. Kirk and McCoy are framed for the crime and sent to Klingon Siberia (the icy penal colony of Rura Penthe). However, Spock rescues them, they find one of the true culprits among the Enterprise crew, and they uncover a conspiracy to assassinate the President of the Federation as well – an attempt which, of course, they foil with a little help from Captain Sulu of the USS Excelsior. The film was made in 1991, as the real life Cold War between the USA and the USSR was drawing to a close and the USSR was breaking up (with the destruction of Praxis partly inspired by the nuclear accident at Chernobyl). Like much of the best science fiction, it plays out as a fairly straightforward metaphorical representation of how many Americans felt about Russia and Russians at the time. Some of the connections between this film and the plot, direction and general tone of Discovery are fairly obvious. While the earliest origins of the hostility between the Klingon Empire and the Federation were covered by Star Trek: Enterprise, Discovery and The Undiscovered Country bookend one complete story by showing the beginnings of a period of outright war in Discovery, to be followed by decades of cold war, ending in The Undiscovered Country. In this way, The Undiscovered Country is a clear starting-point for Discovery – we know the end of this story, so what was the beginning? This may be partly way the first nine episodes were specifically set in the Prime Universe; we are supposed to know the ultimate conclusion of these events, as context for the story.

By taking the war and ongoing hostilities with the Klingons as a basis for their story, both The Undiscovered Country and Discovery paint on a very broad canvas. The Wrath Of Khan was an entirely personal story – while the Genesis Device, in the wrong hands, could be a terrifying weapon, the actual plot of the film is on a much smaller scale and affects only the crews of two spaceships, one science station, and one group of exiles. The Undiscovered Country is a much bigger story. Kirk’s personal journey and the softening of his feelings towards the Klingons offers his character movement and direction, but the plot itself opens with the destruction of an entire moon than dooms the whole Klingon Empire, and the resolution looks to bring about peace for two huge space-faring cultures. In the case of Discovery, the huge scope of the driving force of the plot is combined with a new innovation for Star Trek, the privileging of one specific character as the lead, rather than structuring the show around an ensemble (or a trio, in the case of much of the original series). The contrast between the individuality of Burnham’s story and the widespread consequences of her actions is part of what gives the series such a different feel from the other television incarnations of Star Trek, especially in the early episodes, before the rest of the ensemble starts to settle down. The significance of the consequences of anyone’s actions aboard Discovery also provide opportunities for self-sacrifice among the crew, particularly on the part of Stamets – though in that aspect, of course, The Wrath Of Khan has not been forgotten! Its most famous lines (“the needs of the many outweigh the needs of the few, or the one”) are still being trotted out and re-considered in this harsh, war-torn context.

Discovery has occasionally been criticised for its frequent use of the Klingon language, and a fascination with language is another theme it shares with The Undiscovered Country. The film takes its title from Shakespeare’s Hamlet, and one of its darkest ironies is that the Klingon Chancellor Gorkon claims it refers to ‘the future’ – but of course, in its Shakespearian context, it’s a reference to death, and the possibility of life after it (which is all the future Gorkon has, but from which he is trying to spare his people). The film gave us the glorious camp of Christopher Plummer reciting Shakespeare in grandiose fashion, in Klingon, as well as the humour of Chekov and Uhura trying to speak Klingon because a universal translator will be recognised, and a line about not waiting for the translation ripped straight from the Cuban Missile Crisis, though its Klingon characters do tend to switch between the two languages for ease of viewing at times. Discovery has not yet made quite such poetic use of the Klingon language, but it has displayed a similar concern with using language to emphasise the Otherness and the difference of the Klingons and their culture as opposed to Starfleet and its allies, and similarly emphasises the presence or absence of the apparently fairly new technology of universal translators. The influence of the film also filters down into Michael Burnham’s character and her development. Up until that point, with the exception of their bizarrely violent mating rituals, Vulcans had been presented in an almost entirely positive light – Spock’s advice often needed modified by McCoy’s appeal to sense and emotion, but Spock and Vulcans more generally tended to come across well, in contrast to their Romulan cousins. In Star Trek VI, however, the traitor on board the Enterprise is revealed to be Spock’s protégée, a young Vulcan woman who believes it is illogical to trust Klingons. In the years since, the darker side of Vulcans and Vulcan logic has been explored some more, most often in Enterprise, though Star Trek: Voyager’s Captain Janeway also told Tuvok, on an occasion when she was particularly disappointed in him, that “you can use logic to justify anything. That’s its power – and its flaw”.

Discovery returns to this idea with some force. ‘The Vulcan Hello’, a concept which gives its name to the series’ very first episode, is a logical tactical move that creates the conflict between Burnham and Captain Georgiou that prompts Burnham to mutiny and that may or may not have escalated tensions with the Klingons beyond the point where it was possible to make peace. Georgiou intends to follow Starfleet protocol, but the Vulcan-raised Burnham suggests a much more aggressive pre-emptive strike based on Vulcan logic, then attacks her Captain with a Vulcan nerve pinch. Which woman is right, and whether the Klingons would have attacked and started the war anyway, will be a question for Trekkies to debate down the ages, but it is unquestionable that Burnham’s Vulcan logic (along with a good dose of human PTSD and simple prejudice) led her to commit mutiny in a very Vulcan fashion and resulted in her own personal downfall. Both the value and the danger of Vulcan logic continues to be explored within this series, with Burnham incorporating the original series’ balance of Kirk placed in between Spock’s logic and McCoy’s emotion in one person, born human, raised Vulcan, then returned to humans.

(Incidentally, while we’re talking about identity, the Director’s Cut of The Undiscovered Country also features a Klingon assassin revealed to be a human in disguise. This may, according to some theories, be reversed in Star Trek: Discovery – but since this is fan speculation about a future storyline, we won’t go into it in any more detail here).

Even Star Trek: Discovery’s darker, grittier tone and feel follows on from Meyer’s two feature films. While there’s some Borg body horror in Star Trek: First Contact, Meyer’s films are by far the most violent of the Star Trek universe. The Wrath Of Khan puts far more red, human blood on the screen than any other Star Trek movie, and while most of the blood in The Undiscovered Country is Klingon pink, this is the film that sees Spock mind-rape a clearly distressed and pained Samantha from Sex And The City (Kim Cattrall as Valeris) on the main bridge, in front of half the crew. Discovery may have gone further than any other incarnation of Star Trek in its depiction of torture, trauma, and rape, but that tone has its roots in the series’ sixth film.

Discovery feels very different, especially in its early episodes, from any other television incarnation of Star Trek so far. However, its tone, subject matter and themes do resonate strongly with the films and especially with The Undiscovered Country. It’s clear that Meyer as producer, and the rest of the team, have made a conscious choice to shift their attention towards his later Star Trek film when looking for inspiration for this new series. Since The Undiscovered Country is something of an overlooked gem that isn’t talked about often enough, we can only hope that this means good things for Discovery – wherever the show is about to go when it comes back to our screens in January.