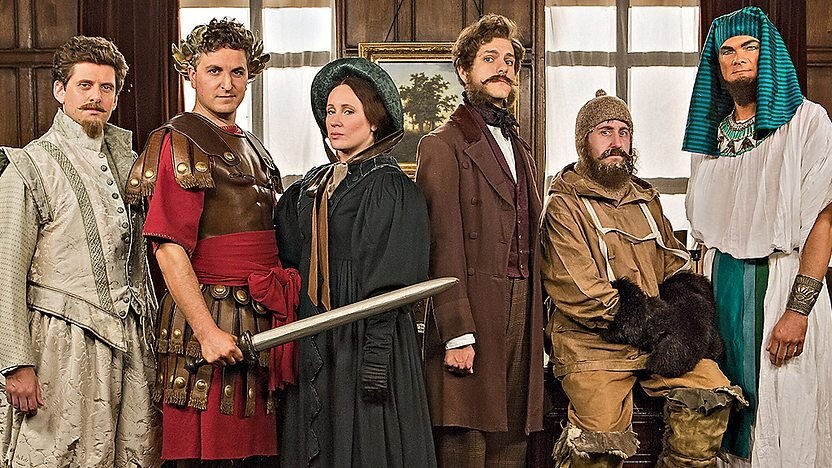 With reports of a Horrible Histories feature film in development, we salute the genius songs of a magnificent show…

Ah, Horrible Histories. The show that brings all the slapstick humour and wordplay of Blackadder and Monty Python to a young audience. It’s a rare and marvellously British televisual feast (points for citing the reference, there): a bunch of hugely talented actors charging around in historical outfits, singing songs and starring in genius pop culture-inspired spoofs to deliver the darker side of history to school children.

See related
Yonderland: saluting a brilliant fantasy comedy
The making of Bill: "wrestling an octopus into a carrier bag"
Bill: the battle to get a brilliant smaller film noticed

Terry Deary’s famous books were an obvious choice for a CBBC adaptation, but it was a bold choice to assemble a writing team and cast known for their work in the adult comedy world to bring his historical books to life. What resulted were record ratings, a loyal audience of children and adults alike, live BBC performances and television awards aplenty. Horrible Histories is a show that respects the intelligence of its young audience. There are no moments when a gag is just ‘one for the parents’; the show respects that different people will understand different references and the sketches work hard to make history and jokes accessible to all.

And the jokes are just a joy. Bringing its audience the violent, mad and gross facts that other history books have missed out, the cast star in a number of recurring sketches in a variety of time periods. Who doesn’t love Stupid Deaths, the series in which Simon Farnaby dresses as the Grim Reaper and allows historical figures to proceed to the afterlife in exchange for a good laugh at the expense of their bizarre demise? There is also the inspired HHTV News, in which reporters rush to the scene of historic battles, and Jim Howick’s hilarious ‘Hi, I’m a shouty man!’ adverts which explain the historical uses of items in a brash, infomercial style.

Let’s be honest, though, it’s the songs that have made Horrible Histories the huge success it has become. Not only lauded for their historical content and accuracy, the production value of the songs is astonishing, with tunes inspired by a huge array of artists and parodied with great flair and attention to detail. The costumes, the make-up, the dance routines… they’re a pure delight. Here are our picks for the top 15 Horrible Histories songs:

Mathew Baynton stars in this tip-top Eminem parody about the ‘merry monarch’. Packed as always with historical facts, Baynton raps his way through the comprehensive low-down on the death of Oliver Cromwell and the restoration of the monarchy by Charles II. The number also stars almost the entire core Horrible Histories gang as they party with their new monarch: Martha Howe-Douglas, Ben Willbond, Jim Howick and Laurence Rickard. Can Charles II stand up straight? Of course not. He and his other wiggy chums are gangsters, and everyone knows that involves squatting awkwardly as you rap. Bruv.

Another corker with Mathew Baynton at the helm, the Dick Turpin song tells the tale of the nortorious highwayman with more than a small nod to Adam & the Ants. Baynton may fancy himself a tad in his glam get-up but who can blame him? The dude looks brilliant in the uniform and eyeliner a-la Adam Ant, complete with a pretty bang-on singing impersonation, although, contrary to the 1981 hit Stand And Deliver, this Dick Turpin insists there’s “nothing dandy about me”. It’s a brilliant song complete with the Horrible Histories crew freaking out on their various instruments and chanting “HUH!” for added impact. Marvellous.

A fun doo-wop song performed by the wonderful Sarah Hadland (who, incidentally, does the best TV presenter voice in the show’s Ready Steady Feast sketches). It’s a cute and catchy love song that takes a dark turn as the song gets into the nitty gritty of caveman burial rituals. Needless to say, your caveman love wouldn’t have stuck around for too long.

A properly cheesy ear worm, Spartan High School Musical involves all the key ingredients of the Disney original: enthusiastic American accents, beaming grins and dancing aplenty. Here the Horrible Histories chaps sing and dance their way through their time at the Spartan school, a ruthless training camp that picked the fittest children to fight the Persians while the weaker babies were left for dead. It doesn’t sound like a bundle of laughs, but they seem to be having a whale of a time.

Before Horrible Histories took their musical numbers in the direction of famous song parodies, they came up with this Tudor number performed by Martha Howe-Douglas and Ben Willbond. It’s a very repetitive melody, granted, but it’s an undeniable classic packed with detail about King Henry VIII, his three children and his many wives. Who doesn’t love the jolty dance routine and that cracking line, “Just popping out to chop some wives!”

This glorious Girls Aloud parody explains the important role that women played on the home front during the Second World War. Starring Martha Howe-Douglas, Alice Lowe and Katy Wix, the girls demonstrate their different jobs before coming together for a rousing chorus on a stage, complete with classic noughties girl band choreography.

Horrible Histories celebrates another kick-ass woman in this fierce song about the Celtic queen Boudicca. Martha Howe-Douglas crosses tribal warrior aggression with Lily Allen and Kate Nash vibes as she sings of how she fearlessly waged war on the Roman forces. Props to the editor for this punchy music video.

Wow oh wow can Dominique Moore sing. Instead of the familiar Horrible Histories gang, we are treated to Moore and a gospel choir singing their hearts out in this catchy Motown number. It’s a fitting style to celebrate the brave black woman who took a stand against segregation and went on to lead the fight for nation civil rights in America. Complete with spinning newspaper headlines that chart Rosa Parks’ achievements, this is a toe-tapping song of celebration and liberation. R-E-S-P-E-C-T.

WARNING: you will regret listening to this song. It was on and off this Top 15 list more times than the Incan emperor Pachacuti cut up his enemies but, while its production value isn’t a patch on some of the bigger ensemble numbers, there is no denying this song is damn catchy. It’ll stay in your head for days on end and, let’s be honest, it’s a joy to watch Mathew Baynton beaming and dancing about as he sings about the barbaric acts of this Peruvian ruler.

Moving on from genre spoofs, we enter the period where the Horrible Histories gang started to make parodies of specific songs. For the story of Charles Dickens, The Smiths’ This Charming Man is the obvious choice. The songwriters have done an exquisite job of creating a song so reminiscent of the original without breaking any copyright law and Mathew Baynton throws himself into this Morrissey-Dickens hybrid with attention to detail that screams ‘fan boy’. The swinging of the bunch of flowers, the vocal slides, looking suitably woeful as he sings “heaven only knows I was a miserable soul”. It’s a pitch-perfect parody that provides a great insight into the life of the famous author.

Ben Willbond takes centre stage in this smashing stadium rock band parody that tells the story of Groovy Greek Alexander the Great, a king at the age of only twenty. A parthenon complete with burning goblets set the stage for this catchy number, which includes a shredding guitar solo from Ptolemy and a picture of Alexander’s horse on the big screens. Obviously.

One of the show’s best songs with a truly poignant ending, this musical number celebrates the achievements and sacrifice of the RAF pilots that fought for the Allied forces in World War Two. Perhaps it’s because all the Horrible Histories boys are together, but this joyful Take That boy band parody couldn’t be more perfect. The stunning shots of the actors in front of a real Spitfire, the cheesy and enthusiastically performed choreography and some of the best one-liners… it’s just such a winner. Highlights include Laurence Rickard’s camp address to the camera: “Take that, Hitler!”, Jim Howick belting out “Oh no, pretty baby!” and the ensemble retorts to historical facts, “Oh so strong!” Just when you’ve had plenty of fun, the song hits you in the heart with the words of Winston Churchill as the pilots walk away, unassumingly, into the sunset.

This stirring goodbye song ended the original cast’s final series, moving chronologically forward to recap all the periods of history that the show has made horrible for its loyal audience. Complete with representatives from every historical period and some flashbacks to earlier sketches, this charity single-style song is a big, moving farewell from a hugely talented team.

One of the most famous Horrible Histories numbers, this boy band song closed the first ever episode of the show and, boy, what a precedent to set. Ben Willbond, Mathew Baynton, Simon Farnaby and Jim Howick star as the four King Georges of England respectively and this song has got everything; facts, funny lyrics and the classic Westlife-style rising-from-the-stools when the chorus kicks in. Mathew Baynton’s cheeky wink when he describes his King George II as “the bad one” is a brilliant moment, while Jim Howick shows off his strong singing voice in the rousing final chorus. Gotta love it.

This glam metal number is the obvious choice for the final song on this list. It’s like putting a set together; you want the fun, cheesy stuff to kick things off, then you’ll slip in some of the more angry or emotional stuff, then you’ll ‘end’ with a crowd pleaser… only to come back in with a powerful show stopper for the encore. Welcome to the encore. This Viking song about their invasion of Britain is just perfect; factual as always, beautifully shot in a gorgeous half-light, reliably funny and with riffs that will make your soul happy. The singing heads of Mathew Baynton, Ben Willbond, Jim Howick and Laurence Rickard over the fire is just inspired while the slow-mo walk along the beach at the end is just so damn rock and roll. Take a bow, Horrible Histories, take a bow.