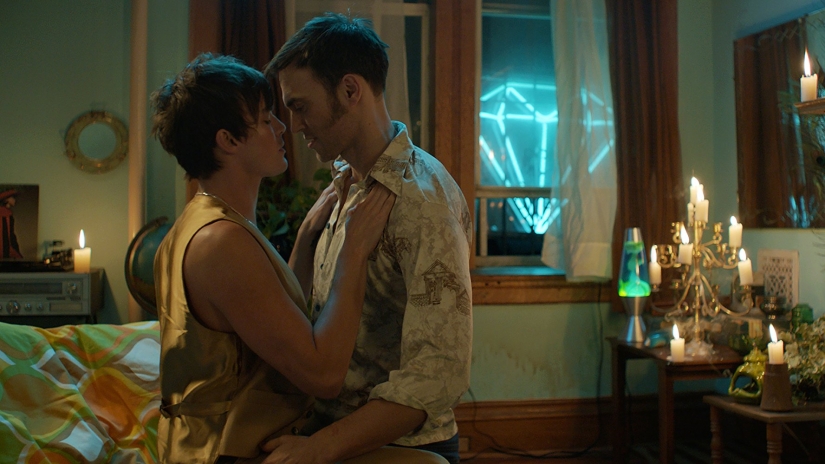 If there was ever a stage musical difficult to transfer to screen, it was Michael John LaChiusa’s controversial Hello Again. The story (or stories) or ten sets of lovers in ten time periods told non-chronologically, director Tom Gustafson and writer Cory Krueckeberg have attempted the near-impossible with mixed results.

How do you keep a film about sex with strangers from becoming a smut-fest? Well, the answer is apparently that you strip the story of most of its inherent sensuality and emotion, resulting in a well-directed and star-studded filmic experiment in place of a coherent movie.

Be prepared – every scene of the film is a sex scene in one way or another and, while that might sound quite appealing or even daring, in practice it feels rather relentless and, in the end, entirely pointless. We move from one to another at a nice snappy pace, but the lack of mystery as to where each scene is going robs the film of any suspense or, eventually, audience patience.

Described as a ‘daisy chain’ of sexual encounters, the film is almost sung-through from beginning to end with only brief pauses in which the characters speak to each other non-musically. While musical theatre fans will be used to this format, general audiences might find it slightly harder to adjust to once the various vignettes really get going. The score, while good, does not contain any memorable songs.

It feels strange to be arguing this, but the lack of nudity hampers the film to the point where some of the sequences are left feeling deeply unsexy. This is a raunchy musical in which blankets are draped strategically, underwear is left on and the camera is unable travel to where it probably needs to be.

What Hello Again ultimately comes down to is watching a lot of attractive young actors pretending to sleep together. We’re only granted a few minutes to really get to know these people beyond their period setting and base desires, which leaves little to connect to in way of story or character.

The biggest issue with this screen version of Hello Again is how unclear the premise is. Are these dalliances the experiences of past lives, or simply stories of love and sexual connection scattered throughout history? If it’s the latter, then why are we visiting these people, in particular, and what connects them other than the fact that they’re all interested in ‘carnal gratification’ of some fashion?

One big mark in the film’s favour is its diversity, which leads to some stories unfolding in ways we don’t get to see very often on screen. It plays with gender and sexuality in multiple ways, from the appearance of Sam Underwood as a female-presenting sex worker in 1901, the gender identity of whom goes unaddressed. Later there are much more straightforward exchanges between TR Knight and Tyler Blackburn as lovers on the Titanic, or Martha Plimpton and Audra McDonald as a US Senator and her secret female partner.

A lot of the performances are strong, with reliable Broadway vets like McDonald and Glee’s Jenna Ushkowitz well supported by lesser known faces like Blackburn or Rumer Willis.

But while there are sparks of interest here and there, most of it falls a bit flat. It’s no coincidence that the most successful sections are Willis’ affecting plight of a neglected wife who may have let her true love pass her by, or the almost-farcical black comedy brought about by an older man hiding the fate of the Titanic from his younger companion just so they can spend their last night together.

There’s no denying that Hello Again is an interesting film, but it’s sadly not a particularly watchable one. Not enough is done to underline the sequences with any further meaning or significance, and without those the film is in danger of becoming feature-length soft-core pornography you’re allowed to watch in cinemas.

Hello Again made its UK debut at the 2017 Raindance Festival, with a wider release later this month.