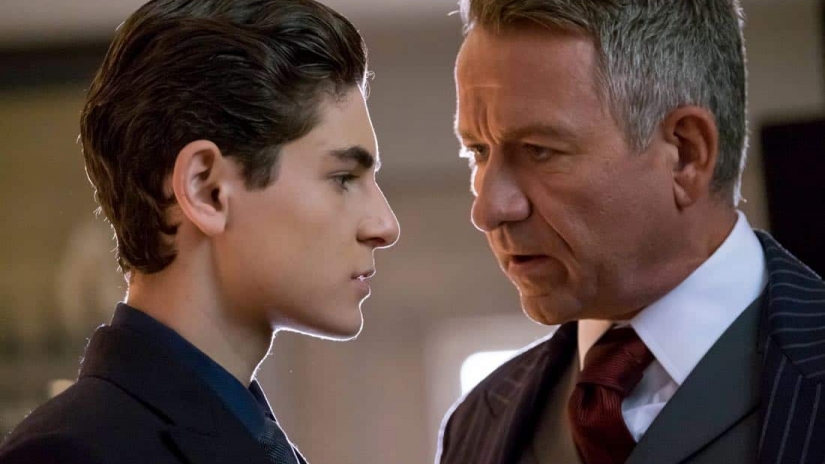 The Demon’s Head is an example of what Gotham is capable of when it’s firing on all cylinders. Tonight’s episode, written by series star Ben McKenzie, has a tightness often missing from Gotham and from network TV in general.

Paired with the kind of impeccable production values we’ve come to expect from this show and a killer performance from Alexander Siddig as R’as al Ghul, and you easily have the best episode of the season and one of the best episodes of Gotham ever, full stop.

As soon as Gotham introduces the Natural History Museum historian and his young grandson, you know this won’t end well for them. This isn’t his story, it’s Bruce’s, and he (apparently) has a(nother) lesson to learn about the sometimes steep cost of playing the Gotham game.

Alex is presented as a Bruce parallel character. He is the kind of relatively carefree kid Bruce could have been if he had never lost his parents in that alley. When Alex sees his grandfather murdered and is on the run for his life from R’as al Ghul, Bruce can immediately relate to the clever, thoughtful, traumatised boy who is just trying to process how his life has been turned upside down.

Bruce becomes Alex’s caretaker. He watches over him in the way Gordon and Alfred helped watch over him when his parents were first murdered. But Bruce’s role as caretaker eventually comes into conflict with his other chosen role as protector of the city. When R’as holds a knife to Alex’s neck and asks Bruce to hand over the knife that will help him fulfil his destiny, Bruce’s duty to the city trumps his duty to Alex. So R’as kills him, breaking poor Bruce Wayne for the umpteenth time in the young man’s life.

While R’as al Ghul may be a super evil dude who kills children just to manipulate other children, he is also a joy to watch portrayed by Alexander Siddig. Siddig truly shines not when R’as is playing the mysterious, exotic villain in the shadows, but when he is exercising R’as’ Respectable Member of Society routine.

When R’as goes into Gordon’s office in search of the knife, he is only half-trying to disguise his supervillain alter ego. He knows that Gordon knows who he is and he doesn’t care. He might play along, but not because he has to. Because it’s fun. That’s what true power looks like.

When R’as isn’t exuding creepy charm at Gordon, he is putting all of his resources towards getting that knife. R’as sets a man who acts like a rabid dog on Alex. Between R’as and Dog-Man, this was one of the scariest episodes of Gotham ever. Much of this is owed to the way director Kenneth Fink shoots the episode, especially the scenes that take place at the Natural History Museum.

R’as al Ghul’s shadows pass over various exhibits of the museum. As Alex and his grandfather examine the knife after-hours, the shadow creeps ever closer, in no particular hurry because it knows that it will get what it wants eventually. Later, Fink shoots the Dog-Man racing on all fours across the expansive museum floor and jumping out from behind display cases, from just off-screen. In the camera-work, Dog-Man is given a stealth and speed that make him feel like something other than human.

Elsewhere in the episode, Ed and Oswald continue their flirt-fighting, which is always a solid source of entertainment for any Gotham episode. The latest twist? Ed continues to suffer diminished intelligence following his de-thawing. He sends Penguin terrible riddles that make no sense. Watching Oswald annoyingly stare down the two rappers Ed has hired to deliver said riddles is the stuff of comedy genius.

Eventually, Ed gets tired of waiting, showing up at Oswald’s club to confront his nemesis head-on. Oswald easily traps him, knocking Ed down a few more pegs by outlining clearly the loss of his intelligence. Oswald plans on freezing Ed again (“Different pose this time,” Mr. Freeze hilariously asks, as if bored with just another day on the job), but changes his mind when he realizes the true victory would be in letting Ed live with the knowledge of his diminished intelligence. Something tells me this is going to backfire for Oswald.

This isn’t the only other shoe that will inevitably drop against Oswald. With Sofia Falcone in town, Oswald uses her to draw out his enemies previously pledged to Carmine. While Sofia may be playing easily manipulated right now, she obviously has far more strategy and skill than Oswald gives her credit for. Unlike Oswald, she is endlessly patient. She can handle the humilation and the relative lack of power while she moves her pieces into place. It probably doesn’t hurt that she has Jim Gordon as a side piece.

The episode ends with R’as al Ghul heading to Blackgate Prison, a smile on his face as he enters through the prison gates. R’as may technically be behind bars, but he seems just as in control as ever. If he’s in Blackgate, that’s exactly where he wants to be.