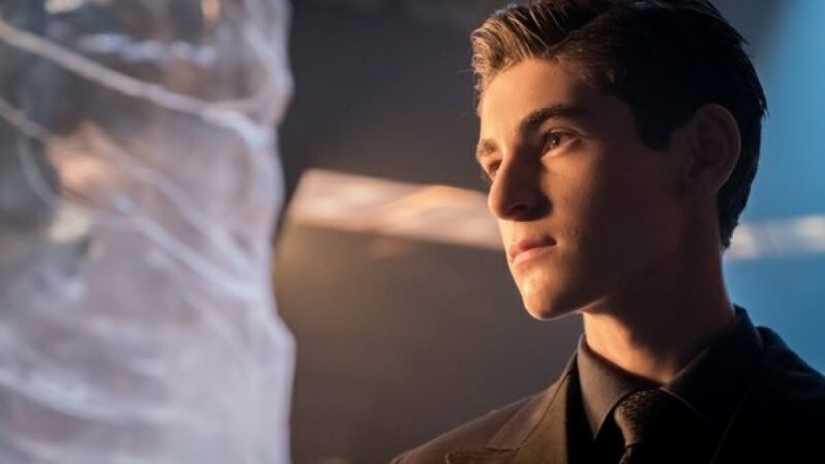 Gotham's Season 4 premiere brings up some interesting questions about crime and justice… and addresses none of them.

When we catch back up with the Gotham crew in the Season 4 premiere, it has been three months since the events of the Season 3 finale. And guess what? Crime is at an all-time low. Huzzah! Gotham is saved!

This is in no small part to the crime licensing program Penguin has implemented across the city. If you don’t have a licence to commit a crime (which, depicted here, seem to be mostly robberies) and you go ahead and try to anyway, then Penguin will sic Victor Zsasz on you. If you do have a licence, rob away!

You have to hand it to Penguin. He has done more to make Gotham a safe place to live, both as the city’s mayor and now as the city’s chief crime lord, than Jim Gordon and the incompetent, ever-corrupt GCPD ever has.

Perhaps the problem lies in Jim’s priorities. When he finds out that Penguin has licensed crime, his concerns are not so much about the corruption of the city, but rather about proving that the GCPD (and Gordon himself) are still relevant. Never let it be said that Gotham runs on anything other than machismo.

There are a lot of interesting thematic questions at play here. Does it matter how violent crime is down if it is down? What tools does Penguin’s criminal organisation have that Jim’s GCPD doesn’t? And, perhaps more importantly, vice versa?

Sadly, all of those questions are raised and then quickly pushed aside in favour of a much lazier plot that involves Jim baiting Steve Buscemi’s brother (whose character’s name is Merton) and Penguin to face off at the opening of Penguin’s new club The Iceberg Lounge (which, while comic book canon, is terribly named and just makes me think of lettuce).

Penguin can see Jim’s “ham-fisted manipulations” coming from a mile away and, instead, catches Merton and his men, planning to make an example out of them. It is Ivy who ends up being the most important player in this dealing, turning off the lounge’s lights and giving Merton a chance to release Crane’s “fear juice” on an overconfident Penguin who then hallucinates a vengeful, demonic Ed coming back to life from his Han Solo-esque slumber. (Yes, in this analogy, Penguin is Jabba the Hutt.)

I wish I had more confidence that Gotham will explore Ivy’s ever-vacillating moral compass. We’ll see. For now, her decision gives some power back to the GCPD. They are able to round up Merton and (apparently) prove their necessity to the city of Gotham. Frankly, I’m still not convinced. Again, if Gotham wants to prove the GCPD’s relevance in any real way, they need to address the questions Penguin’s licensing problem brings up, and depict the GCPD as something other than a corrupt organisation that operates, generally, along the same logic as the criminal organisations they are supposedly trying to combat.

There is a lazy conclusion often drawn in these kinds of stories: that playing by the rules is a less effective way of getting things done. This is sometimes true, but the accountability and stability that often come with above-board operations can be very productive. This doesn’t seem to be a story that Gotham is interested in telling, but as long as the show treats the GCPD as handicapped by its legitimacy, there will never be any real tension between crime and justice on this show. Jim Gordon will remain as irrelevant as he fears he is, and villains like The Scarecrow — who is introduced in his full, terrifying glory in the final moments of the episode — will rule with their chaos. Because, in Gotham, nothing is more powerful than chaos.

This lack of thematic tension is a problem in the launch of the proto-Batman arc, as well. As fun as it is to see Bruce take the next step to becoming The Dark Knight, his hero’s journey is missing an important part: the formation of the Bruce Wayne persona.

At one point in the episode, Alfred tells Bruce that there are some problems that only Bruce Wayne can solve. This seems like a vital narrative note to address — after all, Bruce is one of the few characters who has immense personal resources (i.e. wealth) that could support programmes and policies that would make a huge difference to the most vulnerable of Gotham. But using his Bruce Wayne persona to stand up to Penguin just as Penguin is ready to demonstrate his power is not a good use of that public image or his personal wealth.

Watching Bruce save rich people who are leaving the opera doesn’t seem like the best use of his time, either. Perhaps his path to take out Penguin’s licensing program using the list he (so easily) stole will prove a better avenue. In the mean time, I am much more intrigued by Selina’s evolution into proto-Catwoman. Unlike Bruce, she has far fewer choices in both how to keep herself safe and how to make Gotham a better place to live for those who have no choice but to stay within its boundaries. Beating up creepy goons who prey on teen girls seems like a great place to start.