Goon: Last Of The Enforcers review 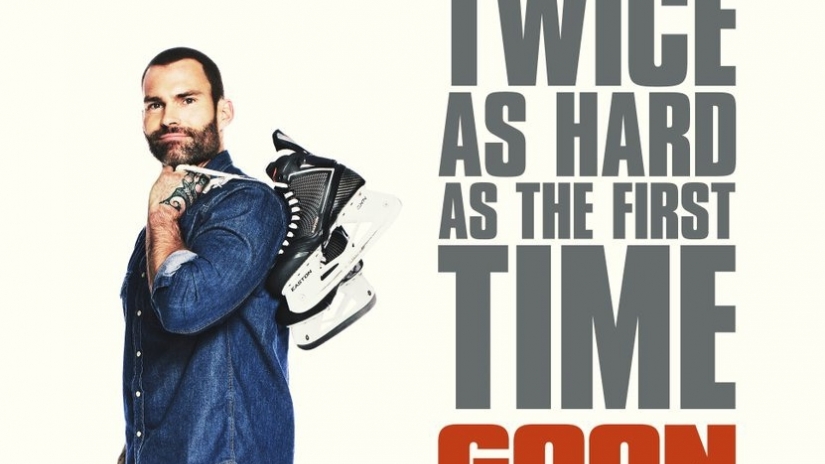 The long-awaited sequel to Goon arrives in UK cinemas. It ain't essential, but it's fun…

Goon: Last of the Enforcers, the sequel to 2011s Goon, is a film about the world changing. The new owner of the Halifax Highlanders has expectations of the team and he’ll bring new players in to achieve them. The new kids coming into the league are something else; all-rounders, and some of them can really fight. Bruiser Doug Glatt’s home life is pulling him away from the game, and his body can hardly keep up with it anymore. So what exactly is a displaced hockey goon supposed to do?

There’s a weird tragedy bubbling beneath the surface of Goon 2, but it’s never really dealt with. The subject of head injuries and being so drawn to and entertained by the violence that causes them, and the refusal by anyone in the sport to address any of it, means that something’s coming.

That’s an example of one of the narrative threads that Goon: Last of the Enforcers gives a gentle tug. It sits alongside plotlines involving a new rival, life after hockey and balancing an increasingly demanding home life with a career as an athlete. They’re all given a soft pull, but none of them are extended to the point where they can drive the plot. Perhaps it might have been better if they’d picked one and really dug into it. It’s a film without a strong narrative drive and it moves at a plodding pace.

The first film took a fairly standard underdog sports storyline and told it in a particularly fun world. A quick look at the Rocky series, which runs about even between good sequels and bad, will tell you how difficult sports sequels can be.

In fact, let’s talk about Rocky IV. Do you remember the robot in Rocky IV? Well, there’s nothing so odd as that in Goon: Last of the Enforcers, but the world has gotten a little bit more cartoonish. The comedy is a little zanier. The main character, Doug Glatt (Seann William Scott) has become even dumber. A generous reading is that it’s the effects of head injuries, a more realistic one might be that the character hasn’t been written as sharply. He’s less lovable idiot now and more Forrest Bump.

The characters in Goon are still spectacular, though, and they’re brought to life by the most brilliant cast. There are standouts all over the locker room. Marc-Andre Grondin impresses massively as LaFlamme, with a performance that surpasses his turn in the first film. Kim Coates remains a constant source of joy for this writer and Seann William Scott shines through in spite of the slightly weaker material. The reappearance of Liev Schriber’s Ross Rhea is fantastic, too. Elsewhere, Wyatt Russell continues his white-hot streak of being terrific in absolutely everything. His crackly, unhinged take on Anders Cain steals scene after scene while serving to anchor the film to reality.

First time feature director Jay Baruchel (who also co-writes with Jesse Chabot and reprises his supporting role in the cast) is able to wring massive laughs from the locker room interactions between the players. It’s coarse, distasteful and riotously funny.

Alison Pill is well up to the material, which sees her character Eva blending a traditional family life with her slightly rough and tumble personality. She’s joined by Elisha Cuthbert, whose rowdy and raucous Mary is a highlight. The two are underserved by the script; the film would benefit massively from increasing their screen time.

Crunching, shiver-inducing violence made a thundering impact in Goon, and here, somehow even more brutal, it elicits the same response. There’s a simplicity about the most effective elements of Goon, from the characters to the story in the first movie. The fights work in the same way; grab ‘em by the collar, start punching and watch the blood and teeth start flying.

So when we’re talking about Goon: Last of the Enforcers, we’re not talking about a great new story or an equally compelling film. Rather, we’re left to enjoy the things that still work from the first one. In that way, it’s a shame, but character work, casting (the film is a who’s who of underrated actors) and action remains a triumph. The world of Goon is so much fun to spend time in. This is not an essential sequel, then, but it is an enjoyable one.