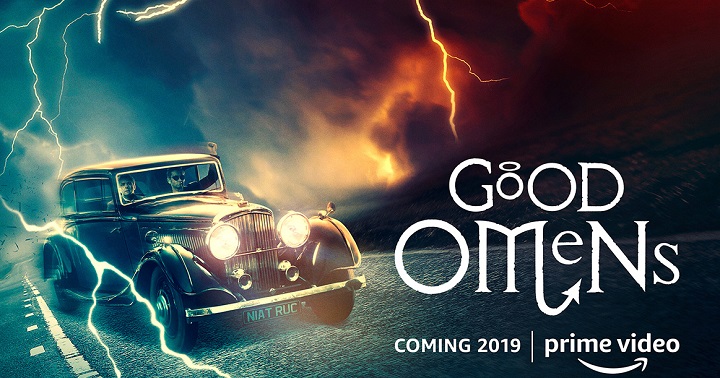 The BBC and Amazon’s adaptation of Good Omens, a collaborative novel written by Neil Gaiman and Terry Pratchett, is heading to the small screen at a brisk pace. It’s now been announced that it’ll premiere on 31st May on Amazon Prime Video UK.

It’s also been confirmed that none other than Benedict Cumberbatch will be playing the role of Satan in Good Omens, but he is said to be “unrecognisable” in the part, as he’ll feature as a “giant animated” version of Beelzebub.

Fancy a look at the title sequence, too? Here you go…

Here was the first trailer we had for the forthcoming series… 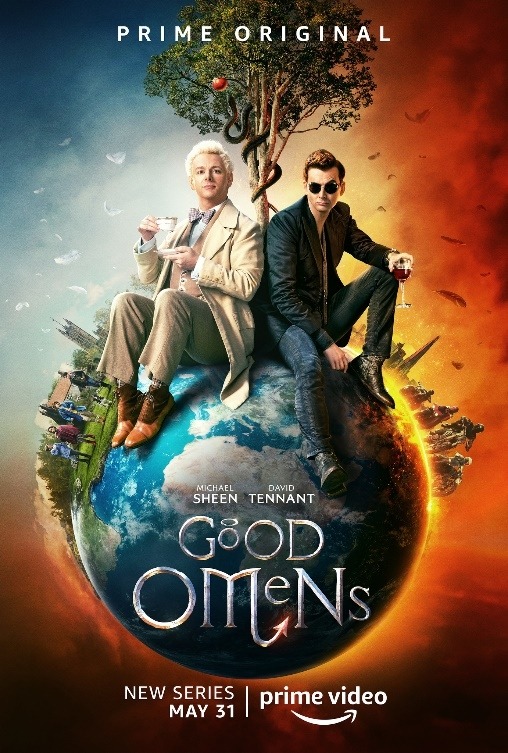 And here’s the synopsis for Good Omens…

Fussy angel and rare book dealer Aziraphale and fast living demon Crowley have lived amongst Earth’s mortals since The Beginning and have grown rather fond of the lifestyle and of each other. So it’s really terrible news for both of them that, if Heaven and Hell have their way, the world will end on Saturday. Next Saturday, in fact. Just before dinner. The armies of Good and Evil are amassing, Atlantis has risen, tempers are flaring. The Four Horsemen of the Apocalypse are ready to ride. Everything appears to be going according to Divine Plan. Expect that someone seems to have misplaced the Antichrist.

Six episodes of Good Omens are now eyeing a 31st May premiere date, first on Amazon and then later on the BBC.

There’s absolutely loads of info about Good Omens on page 2 of this article. Flick over now, if you want to know more about the cast and story, along with loads of pics charting the production…

Good Omens behind the scenes pictures

A cocktail pianist is playing Bohemian Rhapsody. Crowley & Aziraphale are dining in Piccadilly. In the next scene they get bookshop drunk. pic.twitter.com/X73VqEH81A

They are amazing. This is them in the opening scenes, 11 years ago, in St James’s Park. David and Michael, demon & angel. #GoodOmens pic.twitter.com/ceK4XYY881 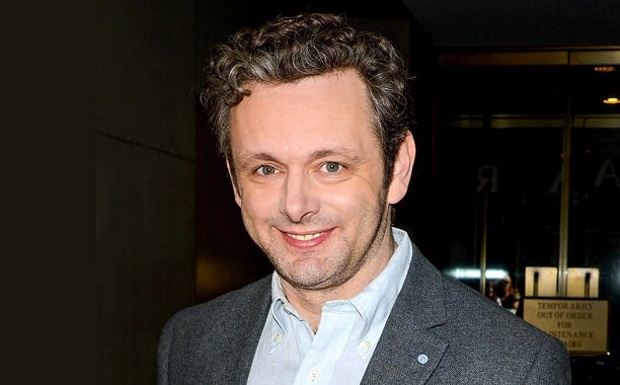 “I first read Good Omens as a teenager and it’s been one of my favourite stories ever since,” Sheen remarked in a statement. “To be part of the team entrusted with bringing it alive on screen is a bit of a dream come true to be honest. To work alongside Neil, who I think is one of the greatest storytellers of all time, is incredibly exciting. And, just like the rest of the world, I’m a huge fan of David’s so I relish trying to save it with him.” 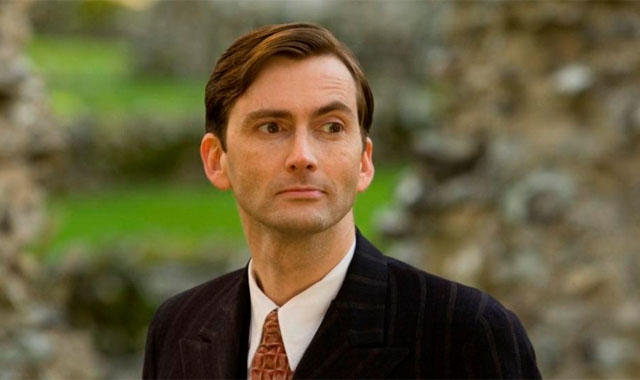 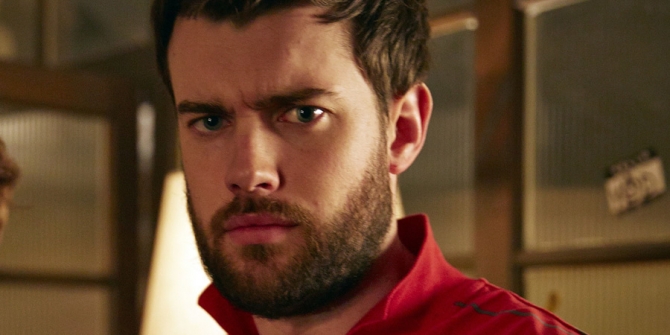 Whitehall will play “wages clerk-turned-witch hunter Pulsifer, aka Newt” McKean will be “Sgt. Shadwell, the leader of the witch-finder army who sends him on his mission” and Richardson will play “Madame Tracy, the psychic medium and part-time courtesan who helps the pair as they try to save the world” according to Variety.

The BBC press office announced that wee unknown Sam Taylor Buck will be Adam Young, the reluctant antichrist, and that Line Of Duty‘s Daniel Mays and Sherlock‘s Sian Brooke will play his parents, Arthur and Deidre Young. 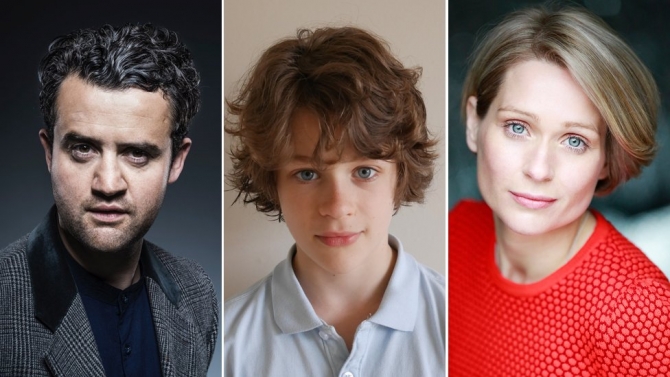 “Beyond overjoyed to be jumping on board Good Omens,” Daniel Mays said in a statement. “It’s not everyday you get to play the father of the antichrist! Neil Gaiman’s scripts are out of this world and the cast they’ve assembled are second to none. Can’t wait to get cracking!”

Sian Brooke added “I’m thrilled to be part of this fantastic adaptation of Good Omens and working with such a great team of cast and creatives.  It’s certainly going to be an adventure playing the unknowing mother of the antichrist!”

It’s been announced that none other than Jon Hamm will be playing the Archangel Gabriel. 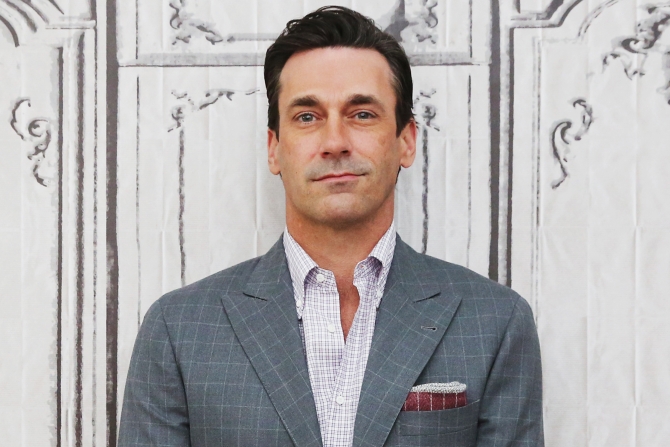 The actor, who has previously featured in episodes of Black Mirror and Toast Of London, will be heading back to the UK once more for his Good Omens role.

“I read Good Omens almost twenty years ago. I thought it was one of the funniest, coolest books I’d ever read,” said Hamm in a statement. “It was also, obviously, unfilmable. Two months ago Neil sent me the scripts, and I knew I had to be in it.”

Although Gabriel only has a tiny role in the much-celebrated book, it looks like he’ll have a juicier role in the TV series, if these comments on Hamm’s casting from showrunner Neil Gaiman are anything to go by.

“Once we had finished writing Good Omens, back in the dawn of prehistory, Terry Pratchett and I started plotting a sequel. There would have been a lot of angels in the sequel. When Good Omens was first published and was snapped up for the first time by Hollywood, Terry and I took joy in introducing our angels into the plot of a movie that was never made. So when, almost thirty years later, I started writing Good Omens for TV, one thing I knew was that our angels would have to be in there.

“The leader of these angels is Gabriel. He is everything that Aziraphale isn’t: he’s tall, good-looking, charismatic and impeccably dressed. We were fortunate that Jon Hamm was available, given that he is already all of these things without even having to act. We were even more fortunate that he’s a fan of the books and a remarkable actor.” 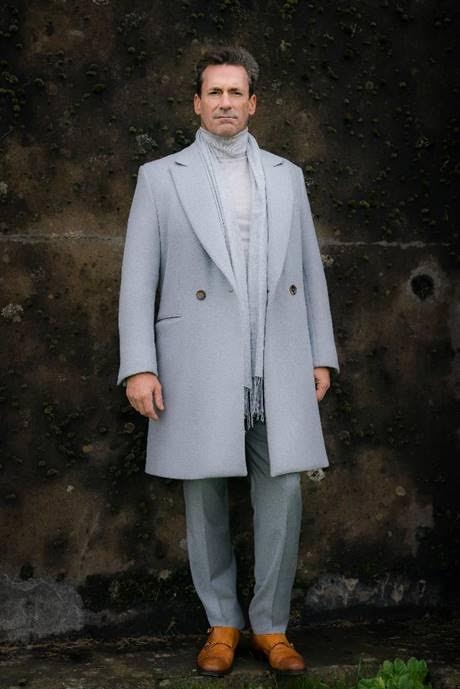 “Gabriel is the leader of the angels, and the most stylish and impeccably dressed of all of them, so we chose an immaculately tailored suit that Jon Hamm wears to perfection, in light colours, along with lilac accessories to bring out Gabriel’s unnerving violet eyes,” remarked costume designer Claire Anderson.

Anna Maxwell Martin (Bleak House, The Frankenstein Chronicles) will be the demon Beelzebub… 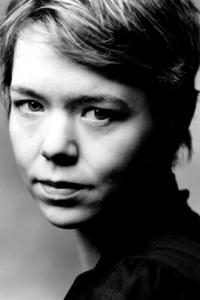 “We already have a stellar cast, and now Anna Maxwell Martin will be the Beelzebub of our dreams. Well, nightmares,” remaked Gaiman of the casting news.

As for the Horsemen Of The Apocalypse, Mireille Enos (World War Z) will be War… 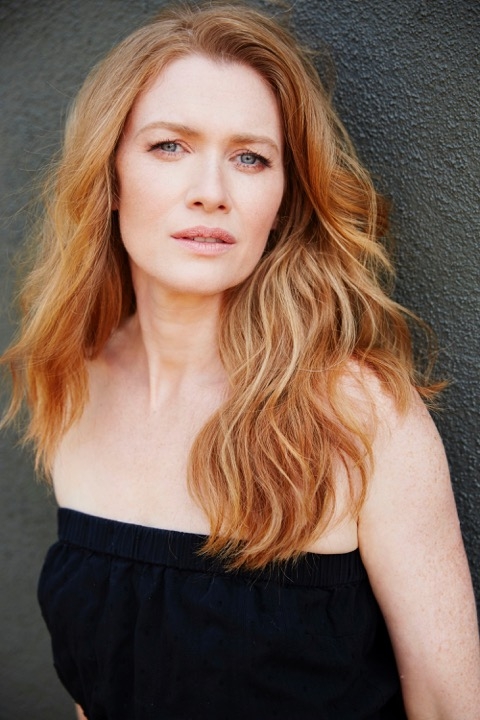 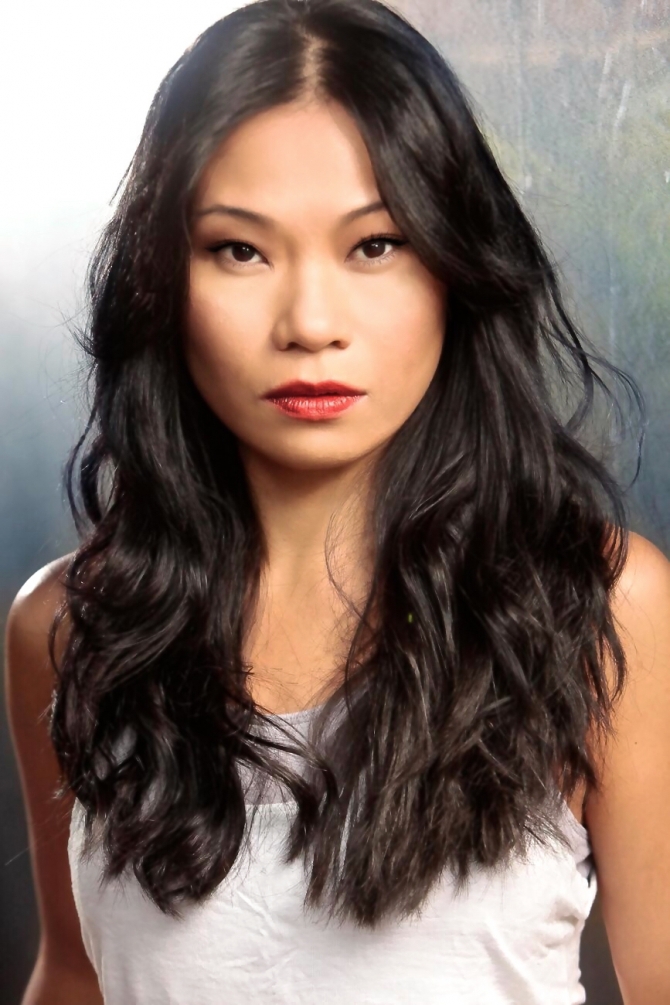 And Yusuf Gatewood (The Originals) is Famine… 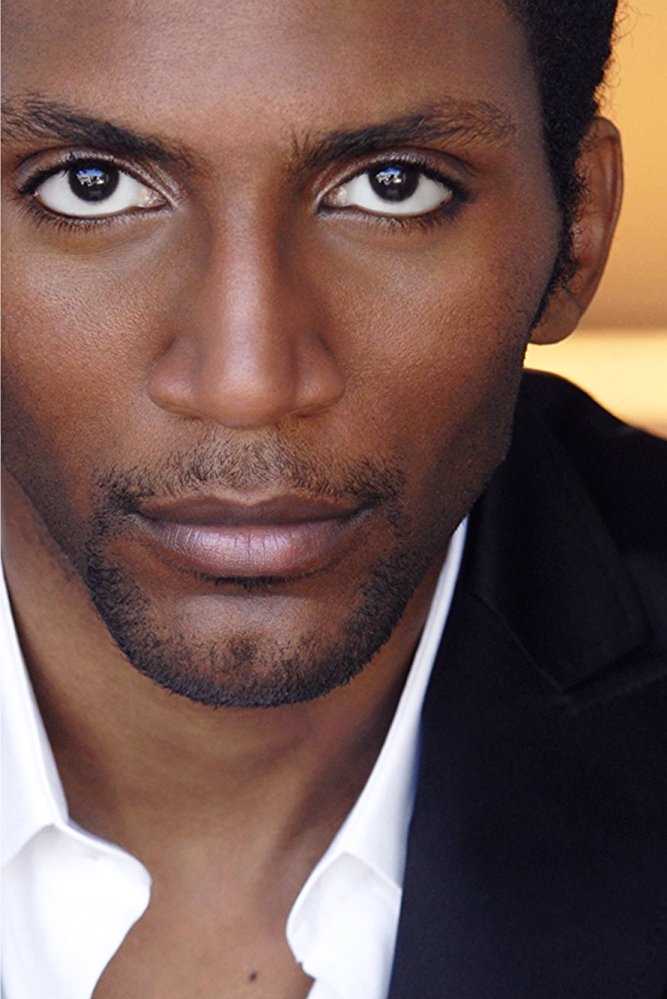 Arguably the best thing to come out of Hull, Inside No.9 and League Of Gentlemen mastermind Reece Shearsmith has hopped aboard Amazon’s ambitious project, playing none other than William Shakespeare.

Delighted to welcome @ReeceShearsmith to the Good Omens family as an Elizabethan playwright whose name escapes me. #alrightItsShakespeare pic.twitter.com/sjcaUk3Iug

“Delighted to welcome @ReeceShearsmith to the Good Omens family as an Elizabethan playwright whose name escapes me. #alrightItsShakespeare,” captioned the author along with the news.

It appears there’s still room in the star-studded adaptation for even more familiar faces – Mark Gatiss (Sherlock) and Steve Pemberton (Inside No. 9), to name a couple. They’ll be playing mysterious book-buyers Harmony and Glozier in the series.

“I’m delighted to be working with David and Michael again and of course with Steve – bringing a little Film Noir menace to such an exciting project,” Gatiss said in a statement. “Being bad never felt so good!” 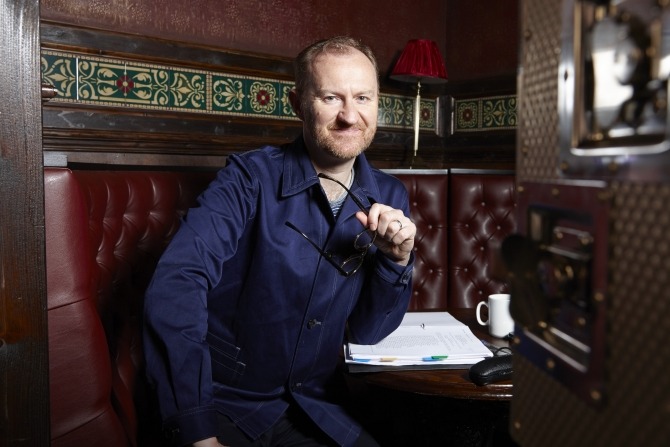 Steve Pemberton added: “To be asked to fly to Cape Town with Mark and meet up with old friends David and Michael working on a script from the genius mind of Neil Gaiman…? Well, you had me at Cape Town. Glozier and Harmony are a small piece of the jigsaw but hopefully one which will fit nicely into place.” 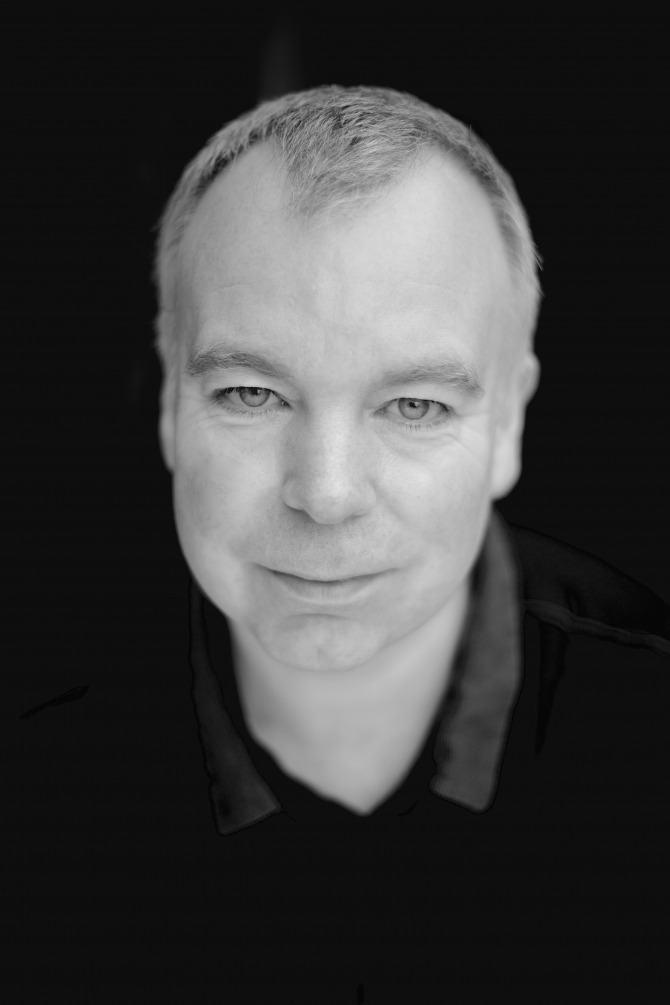 Showrunner Neil Gaiman also had a few words to say on the casting:

“Part of the joy of Good Omens is getting to see what our angel and demon have been doing during human history. And part of the joy as a writer is writing parts with specific actors in mind. Steve Pemberton was my only choice for Glozier and Harmony has to be Mark Gatiss, in a film noir interlude set in 1941…”

Seen here testing local drums for a 2 year old for volume+suitability (none of them were loud enough): our Secret Guest Star. Ladies, Gentlemen & All Others, as the father (sort of) of Warlock Dowling, the (Not-) Antichrist,I present the temporarily beardless Mr @Nick_Offerman. pic.twitter.com/SLen4qKs7b

Why, that’s Parks And Recreation star and all-around good egg, Nick Offerman! Blimey. To see him without at least a glorious moustache is truly a strange site to behold, though. Perhaps they could use CGI to pop it back in? Sort of like a reverse Henry Cavill deal? Our eyes are simply struggling to process it right now, you’ll have to give us a minute.

“There may not be anyone alive who can deadpan a line quite as well as Nick Offerman,” said showrunner Gaiman of the casting. “He’s a terrific performer, and has to say a lot of things in Good Omens that are humanly impossible to deliver with a straight face. Fortunately, Nick is not entirely human. We are very lucky to have him.”

Nick Offerman went on to add “If you had told me when I first read Good Omens in the early 90s that I would one day visit South Africa to giggle with Neil Gaiman at laptop-screened footage of Dr. Who and David Frost dancing because I was assaying a role in the adaptation of said book, I would likely have offered to purchase some of whatever you must be smoking. But here I am, still giggling at the luck of it.”

The beloved actor and comedian will be playing a US Ambassador, and father of Warlock, who is mistakenly labelled the Antichrist.

The insanely huge cast had a new addition. It seems there may still be a few more surprises ahead, at least if this new guest star is any indication…

Look who is next to join the cast of #GoodOmens ! The magnificent David Morrissey as Captain Vincent, who encounters Atlantis… %u2066@neilhimself%u2069 pic.twitter.com/d1iclXe1D2

David Morrissey (The Missing) has joined the massive cast as Captain Vincent, “the captain of the Morbillo, a cruise ship which encounters the sunken city of Atlantis.”

Good Omens tells the story of the approaching end times and follows characters who are either bent on avoiding the apocalypse or actively seek to bring about Armageddon. From the unlikely partnership between Aziraphale and Crowley, to a hospital mix-up with the birth of the antichrist, this tale is both dark and hilarious. Touches of both Pratchett (the end is predicted by The Nice And Accurate Prophecies Of Agnes Nutter, Witch) and Gaiman (the harbingers of doom are the very modern Four Horsepeople of the Apocalypse) abound. 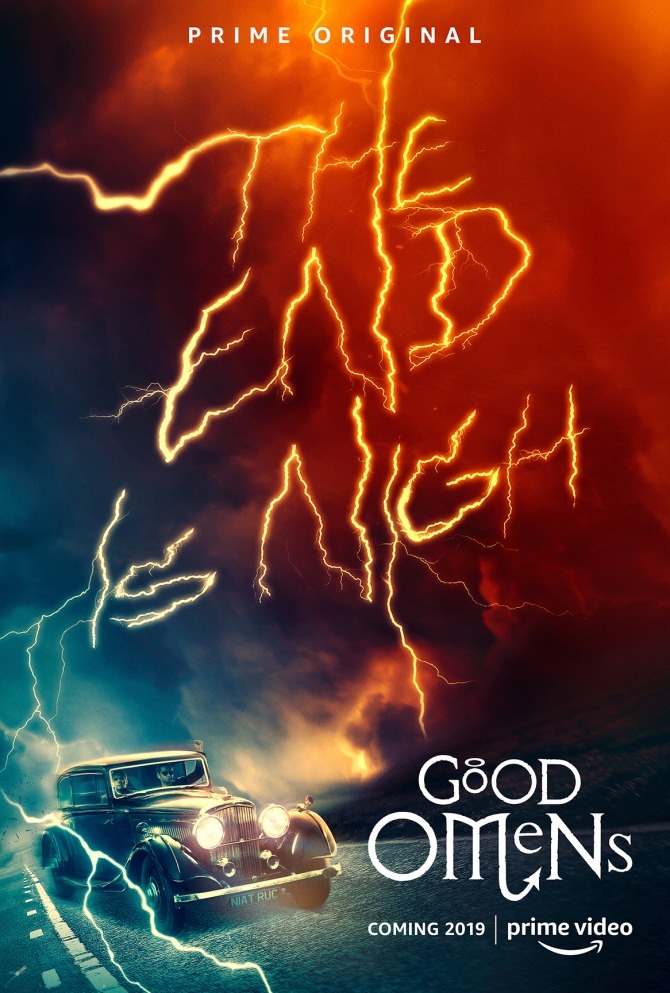 “Almost 30 years ago,” explained Gaiman when the project was first announced, “Terry Pratchett and I wrote the funniest novel we could about the end of the world, populated with angels and demons, not to mention an 11-year-old Antichrist… It became many people’s favorite book. Three decades later, it’s going to make it to the screen. I can’t think of anyone we’d rather make it with than BBC Studios, and I just wish Sir Terry were alive to see it.”

Gaiman wrote the scripts and will serve as showrunner, as well as producing the series alongside Caroline Skinner (Doctor Who) and Chris Sussman (Fleabag).

Douglas Mackinnon (Sherlock, Doctor Who, Outlander) took to his Twitter account last week to reveal that he would be directing all the episodes himself, and also posted the first behind-the-scenes image.