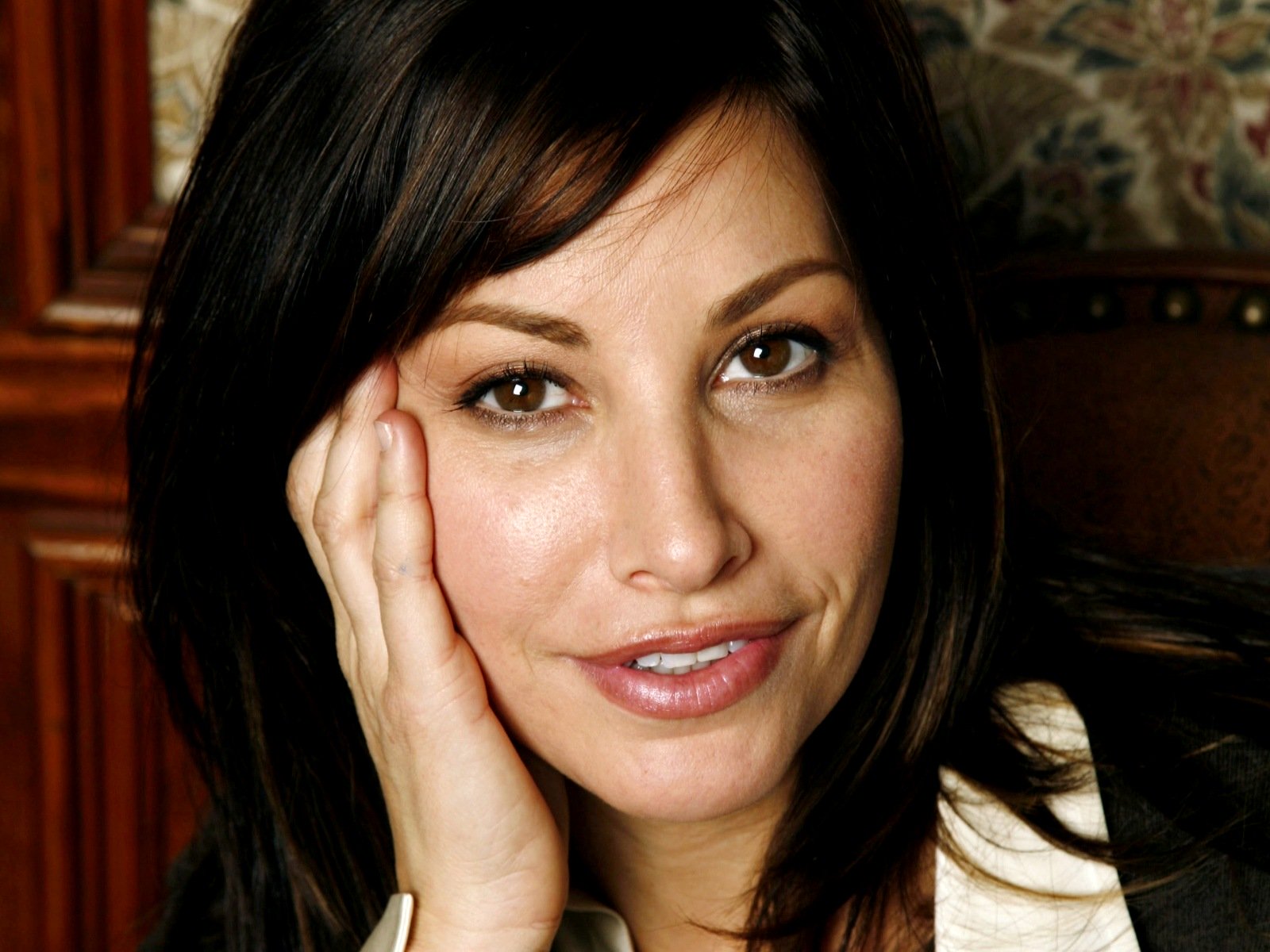 The great Gina Gershon tells us about her latest film, Inconceivable, co-starring Nic Cage, plus her love of The Exorcist, and lots more…

In a career spanning over 30 years, Gina Gershon’s worked with an incredible range of filmmakers, from Walter Hill in the 1980s to Robert Altman, Paul Verhoeven, John Woo, Michael Mann and the Wachowskis in the 90s and William Friedkin in 2011’s Killer Joe.

Her latest film, the domestic thriller Inconceivable, reunites Gershon with Nicolas Cage for the first time since 1997’s Face/Off – albeit in very different roles. In Inconceivable, Gershon plays a well-to-do parent who begins to suspect that the woman who’s agreed to be the surrogate mother to her second child isn’t all she seems. As Gershon’s disbelieving husband, Cage is very much the supporting actor here – quite a reversal from their last screen pairing, where it was Cage who got all the screen time.

With Inconceivable making its home debut in the UK, we got on the phone to Gina Gershon to talk about some of the directors she’s worked with, roles for women in Hollywood, and why she’s seen The Exorcist over a hundred times…

Inconceivable reminds me of those 80s and 90s thrillers – Hand That Rocks The Cradle and things like that.

Yeah totally. That’s what I loved about it. It really is a throwback to those movies.

It gives you a good role, too.

Yeah. It’s an interesting character and, even though it’s a throwback, it’s kind of with a modern theme. In today’s world, with surrogacy and having people come to your house… a woman who wants to be working and raise their kids. I do like the character, and I think it’s a fantastic thing that you can have someone else basically help you have your child. It’s a fantastic thing, and it can also be a scary thing – it could go south if you’re not careful.

These sorts of thrillers deal with quite wealthy families. Do you think they feed into a certain paranoia among the rich?

Well, I don’t know. That may or may not be true. I just think if there’s something weird about the woman who’s carrying your child, and she shows up at your house and turns out to be crazy, then that’s a good reason to be paranoid!

Oh yeah. I just mean that these thrillers play on  our innate fears – of strangers, of the vulnerability of letting people into your home.

Yeah. Sociopaths and psychopaths are scary people, because a lot of the time people don’t realise they’re sick until it’s too late.

Hmm. Working with Nic Cage again – this is the first time you’ve worked together since Face/Off isn’t it? Unless I’m mistaken.

No, we hadn’t worked together since Face/Off. It was really great. I love working with him. I mean it was a much straighter part in Inconceivable – Nic and I kept looking at each other like, “Okay, we’re parents now!” I think we’re both used to being a little nuttier in our performances, but I love him. I’ve known Nic a little bit since my high school days, so it’s a funny thing. Even though we’ve known each other a long time, we don’t really hang out that much. He’s always sweet and such a gentleman. I really adore him. It strikes me that you’re the star of the film and he’s the support.

Yeah, it was great of him to do that. He was like, “It’s important to be supportive of strong women roles, and I wanted to be a part of this.” It was very generous, and it was fantastic that he let me do it.

Do you think things have improved for women in Hollywood now, versus when you were starting out in the 80s and 90s?

Um, no. Listen, at least the conversation is out there. I think we’re seeing more female directors, which seems silly that it’s taken so long, but we’ve seen the success of Wonder Woman, which is fantastic. I just saw Detroit – I think Kathryn Bigelow’s an incredible director. And women directors don’t have to just do the personal, heart-warming, relationship movies – they can direct big action movies and thrillers. You’re either a good director or not a good director – it doesn’t have any bearing.

Are the roles you’re being offered more interesting?

As you get older it becomes more and more difficult. You’re seeing more on television. But Wonder Woman had all these great, strong roles for women. You know, most of these films are filled with 20 year-olds, or maybe in their early 30s, and a bunch of guys, and it’s nice to see women in the late 30s, 40s, 50s – it should really be across the board. I think, little by little, things get better. Certainly, with the success of Wonder Woman, or even Game Of Thrones, which is so fantastic for strong women. I just think, the more we see of that, the better it is. Absolutely. You’ve worked with some great directors over your career. Verhoeven, the Wachowskis, Michael Mann, William Friedkin. I wondered who you’ve most enjoyed working with.

I’ve been really luck because I’ve certainly worked with some really terrible directors [laughs]. I’ve done some crappy movies. But I’ve been lucky. I adored working with the Wachowskis. I loved working with Friedkin – it was difficult, but I love him as a director. I loved working with Robert Altman – I was very lucky to have worked with him on The Player. Michael Mann was fantastic. I just worked with David Gordon Green, who I really like – I was doing a third season of Red Oak. He’s just so funny. I got to work with Adam McCay on a couple of projects here and there. I worked with Kay Cannon, a female director, on a film called The Pact. She’s amazing to work with. It’s out next year and it’s funny, a really funny script.

What are your thoughts on the way Showgirls was reassessed as a cult film?

It’s interesting. I mean, it made me never listen to reviews. Journalists, when they’re reviewing things, have a weird way of… I think it was about Joe Eszterhas and Paul Verhoeven at the time, it felt like a weird personal thing. It made me love Quentin Tarantino even more, because he was the only one who came out and said, “I love Showgirls, and this is why.” The interesting thing is, so many of these journalists who couldn’t stand the movie and put it down, to this day, if I’m doing interviews, they’ll say, “What about Showgirls?” They want to talk about it, but in kind of like a groupie sort of way, you know? I’m like, “Gee, I thought you hated this movie. Why are you still talking about it?”

I mean, if you believe the good reviews, you have to read the bad reviews. For better or worse, critics were kind to me in those reviews, which was also a little weird, when everyone’s putting down the movie and you get a nice review, you feel kind of weird about. You want everyone to… listen, it doesn’t matter at the end of the day. The movie’s still going strong and people are obsessed with it.

As you say, reviews tend to be coloured by things going on around the movie and not just the movie itself, sometimes.

What are your memories of working with Paul Verhoeven, because he’s a famously passionate, fiery director?

Yes. Working with Paul Verhoeven prepared me for working with William Friedkin! They’re both really good at what they do, but they’re both very fiery and very passionate and, you know, they can be difficult at times but you have to figure out their rhythms and really not take things personally because they just get so impassioned with what they’re doing. But once you’ve learned that, they’re great. Friedkin is just one of those greats, you know? I could watch his movies a hundred times and I still see new things that I hadn’t noticed before.

What’s your favourite film of his – that isn’t Killer Joe, obviously.

Oh, The Exorcist, for sure. I think I’ve probably seen The Exorcist over a hundred times.

That many? Oh wow. And it has some great roles for women in there, actually.

Yeah, Ellen Burstyn – she’s fantastic in that. She’s one of my all time favourites. Friedkin’s smart, because he knows good actors… if The Exorcist hadn’t been so well cast, with so many special actors, it could have been silly, but he anchors an unbelievable story in reality and really believable performances.

It’s the same with Get Out. I liked Get Out – really strong, solid actors in this crazy story. Because it’s so well directed and well acted, it just works. I loved it.

It’s been a great few years for these mid-to-low-budget genre films.

What were your memories of working on Face/Off?

I loved working on that. John Woo is a genius. I mean, he really is. I just want him to do a musical. I think he’d be incredible at directing a musical, because if you look at his fight scenes, they’re so balletic and choreographed. I mean, he’d choreograph one scene for a day and a half, but then once you shoot it with eight different cameras, then the set’s done! Because everything blows up. You do it in one take. It’s exciting to work on. I don’t know, I love what he does.

Wouldn’t that be great? I kept saying, “John, you need to do a musical”. He was like, “Yeah, I love musicals.” It’s such an obvious thing – I hope he does it one day.

With the success of La La Land, you never know. It might’ve started a new trend! So what have you got coming up next? I saw that you have a lot of things, like a film called Shotgun coming out next year.

I’ve done a lot. I’m excited about a thing called Permission, that’s coming out this coming year. The Pact, the one I mentioned with Leslie Mann, I did Crashing, a TV series with Judd Apatow, which I really loved. There’s the movie 9/11 coming out, which I did with Charlie Sheen. I haven’t seen it yet, so I’ve no idea what it’s going to be like. Oh my God, what else did I do? I did another Brooklyn Nine-Nine, which is really fun, I did a couple last year. I just finished the third season of Red Oaks.

Oh! I have an animated series that just went on Amazon, it just won the best new animated show for kids, called Lost In Oz. It’s based on The Wizard Of Oz books, and it’s really good. I have to say I really liked what I’ve seen so far – it just won all these Emmys for daytime stuff. Then I did a South Korean movie, Snow White, with Chloe Grace Moretz. I play a witch in that, which is really fun. I feel like there are other things too – I’ve been working a lot.

Wow. You have. I’m surprised you’ve had time to sleep.

No, I’m done! I just finished yesterday and I’m like, “I’m taking a break!”

It sounds like you’ve earned it. Gina Gershon, thank you very much.

Inconceivable is out on DVD and video on demand on August 28th.