Get in the zone: the many adaptations of Roadside Picnic 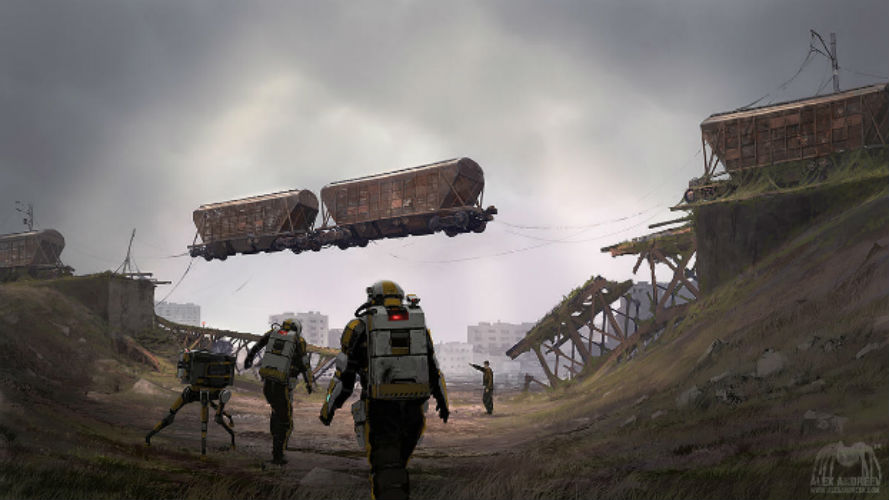 The sci-fi novel Roadside Picnic has inspired works in film, TV, books and even videogames…

Stalker was the final film Andrei Tarkovsky made in the Soviet Union, and is a hypnotic, beguiling experience that refuses to surrender to any one interpretation. That hasn’t stopped critics and fans attempting to apply their own readings of course; is it a religious allegory, a commentary on life in the Soviet Union, an essay on filmmaking or is it about three miserable Russian blokes having a bit of an aimless wander? It could be all of the above, or none – it’s up to each viewer to decide for themselves.

The film is a loose adaptation of Russian sci-fi novel Roadside Picnic by Boris and Arkady Strugatsky, and while on the surface they share similar characters and themes, they play out very differently. Even more interesting is how Roadside Picnic kicked off an unofficial franchise of sorts, being adapted into just about every medium imaginable. The core concept of the book has proven remarkably flexible in ways other stories may not; About Schmidt might make for a touching low-key drama, but it’s hard to see anyone making a pulse pounding video game or experimental soundtrack from it.

So let’s get in The Zone, and explore the many different versions of Roadside Picnic. Published in 1971, Roadside Picnic is set in the aftermath of The Visitation, an event where aliens landed at different spots around the world. These unseen travellers made no contact with mankind and left each site strewn with bizarre, sometimes hazardous artefacts. The world quickly learned these zones are incredibly dangerous, where the laws of physics break down and otherworldly traps are everywhere. Governments across the globe seal these zones off, but since the artefacts are of high value, a culture of thieves – dubbed ‘Stalkers’ – sneak in to acquire and sell them on the black market.

Roadside Picnic takes place over an eight year period, following the fortunes of Red Schuhart, one of the most experienced (aka lucky) Stalkers. Red operates in the Canada Zone, and where most of his kind eventually meet a gruesome end, he always makes it back in one piece. He also acknowledges an addiction to The Zone; he could quit and get a normal job, but the thrill of the place always lures him back. Even after getting married, having a child and a brief spell in prison, Red always returns because The Zone and its mysteries are more exciting than the real world.

The book is a short, intense ride through an incredibly well-realised sci-fi world. It balances Red’s story with heady concepts, with the title itself coming from a theory surrounding the alien visit. In short, they didn’t make contact because they didn’t even register the existence of mankind, with Earth being a brief stopover on whatever cosmic journey they were making. In the way ants crawl over the rubbish left behind after a picnic, humanity is now wrestling over alien junk they have no comprehension of.

The book works as an adventure – with Red’s adventures in The Zone being tense, scary experiences – and an exploration of philosophical ideas. Red’s final journey finds him on the trail of the Golden Sphere, a mythical object that’s said to grant a user their most heartfelt desire. He seeks it in hope of curing his daughter, who has been afflicted by Red’s time in the zone and is losing her humanity. When he finally finds the sphere he’s terrified his most heartfelt wish will be something selfish instead, so he tries to force a hopeful one into his mind. The book ends on an ambiguous note, but the question it poses will linger with readers. Tarkovsky’s take on Roadside Picnic jettisons most of the book, though bits and pieces remain. There’s still a Stalker, though he’s quite different from Red, coming across as more of a religious zealot. There’s talk of various traps and hidden dangers in The Zone, including the famous Meat Grinder, but none of them are set off and the dangers remain psychological. The filmmaker essentially used the book as a skeleton and built his own story around it.

Boris and Arkady Strugatsky didn’t seem to have a problem with this since they wrote Stalker’s screenplay. That said, the shoot was far from smooth. To cut a long story short, the director fired his original cinematographer after numerous clashes, and he later found most of the footage he’d shot over the course of a year was unusable thanks to being improperly developed. He had to reshoot from scratch, but he used the opportunity to rewrite the script, with the resulting film bearing little resemblance to his first attempt.

The end result is probably his masterpiece: a film pulsing with atmosphere, dread, emotion and subtext. The measured pace and lengthy runtime have tested the patience of many viewers, but surrendering to its tempo is vital. The setup is simple; the Stalker leads two men – the Writer and Professor – into The Zone so they can reach The Room, which is said to grant wishes. Although the journey is quite different from Roadside Picnic the film remains tense, with a sense of foreboding haunting every scene. The visuals and sound design play a large role in this, and the performances from the three leads are uniformly terrific. There’s also the symbolism that has led to so many essays, from the constant presence of running water to the black dog that pops up at meaningful moments.

Despite the differences from the book, the ending is built on a similar notion. When the three finally reach The Room, they start to fear their own inner most desires. Like Red in the book, they’re rather live with a sense of mystery and hope than having their wishes or desires realised.

On a side note, the Strugatsky brothers wrote a novelization of Stalker, which in keeping with the chaotic production, it was based on an early script and barely resembles the movie.

Oh yeah, who’s for a little dark ambience to lighten things up?

If you like your soundscapes moody, dark, ominous and vaguely threatening, then Stalker by musicians Robert Rich and Brian Williams is for you. Like the title suggests the album is heavily inspired by Tarkovsky’s film, and it wouldn’t be hard to imagine the eerie music it features being played during the film itself. Naturally, the album isn’t a very mainstream affair and features tracks with cheerful titles such as Elemental Trigger, Omnipresent Boundary and Undulating Terrain.

The album is well-regarded with fans of this genre of music and is a genuinely dark, atmospheric listen, with the constant sound of dripping water definitely evoking the movie. It’s probably best not to listen to it on the way to work on a Monday morning though. Critics look back on Tarkovsky’s Stalker and see a number of eerie parallels between it and Chernobyl, which also features a landscape where nature is reclaiming the land in the absence of mankind. Video game S.T.A.L.K.E.R: Shadow Of Chernobyl took the natural step and moved The Zone to Chernobyl instead, while mixing elements of the book and film together. The game is a first person shooter/RPG set in the Exclusion Zone in the aftermath of a second disaster, which has produced bloodthirsty mutants, created lethal abnormities and now hides artefacts for players to recover.

The game was long delayed, having been announced six years before release. It was riddled with bugs and glitches too, though over the years a dedicated community of modders has added patches that have greatly improved the experience. S.T.A.L.K.E.R isn’t an official adaptation of the book or movie – hence the acronym – but inspiration is plain to see. The story isn’t terribly compelling, but the world and atmosphere are terrific. Exploring the vast landscape and fending attacks by rival factions and creepy mutants is a genuinely taut experience, and the A.I. system creates the feeling the world would exist even without you there.

Most games are player driven, creating the impression you’re driving events at all times. For instance, during the game a player may encounter a group of stalkers in one area, and return hours later to find them all dead with evidence of a huge firefight. Like the book and film, this creates the feeling the environment itself is a living thing, and players must also be on the lookout for lethal traps like jets of flame. Shadow Of Chernobyl feels like a survival horror title in many ways, where resources and ammunition must be managed and creature attacks can happen at any moment.

The game would spawn two follow-ups – Clear Sky and Call Of Pripyat – but S.T.A.L.K.E.R 2 itself was sadly cancelled back in 2012. For the hardcore fans of the series, there are even a few tie-in novels too. Boris Strugatsky gave his blessing to Stalker: The Roleplaying Game by Burger Games, an acclaimed, in-depth adaptation of Roadside Picnic. In the interests of full disclosure I haven’t played it, but by all accounts, it does an excellent job of bringing the world of the book to life. There are numerous Zones players can explore, such as France and Japan, with each having unique environments, traps and artefacts. The sheer depth of lore and world building is another thing player’s love about Stalker, and the focus on players driving the story through their characters.
For more info on the game, check out this detailed video review.

This entry is here for the sake of completion really, since in all likelihood this show probably won’t see the light of day. In 2016 it was announced a pilot episode was being produced for a Roadside Picnic television series, with Alan Taylor (Thor: The Dark World) directing and Matthew Goode starring as Red. Nothing much was heard about this pilot until the beginning of 2017, when it was announced WGN America – the cable network that commissioned it – decided not to move forward with a series.

Since then a trailer for the show has found its way online, which seems to broadly follow key beats from the novel. Apparently, Sony Pictures are shopping the series around to other networks, but so far no one seems to be biting. Alexey Andreyev – the concept artist for the pilot episode – spoke with Russian website Meduza about his work, and seems to feel the primary reason it failed to make it to series was the high cost involved. Be sure to check out some of this artwork here.

It would be nice to see the world of the book explored in a big budget series, but the odds of another network footing the bill look slimmer by the day. A shame, but as seen by the entries above, it feels like a matter of time before someone takes the Strugatskys’ concept and spins it off in a completely unique way.