Game Of Thrones: who is The Night King? 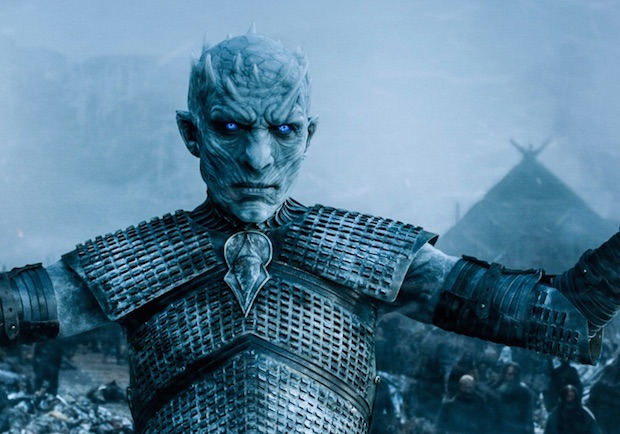 Game of Thrones looks like it's heading into battle with the White Walkers and thus the Night King. Our US chums explore his book origins…

So the ending of this week’s Game Of Thrones episode was pretty badass, huh? The climactic image of the King in the North, the few remaining members of the Brotherhood Without Banners, Gendry, the Hound, and Tormund Giantsbane are going off to find themselves a Wight. This also means they’ll soon be doing battle with the Night King (or for book purists, George R.R. Martin’s much cooler name for him, “The Night’s King”). You should remember this guy, the White Walker at Hardhome who raised his arms like the Undertaker after a particularly memorable Wrestlemania victory. It’s probably one of the most chilling and impressive visuals that Game Of Thrones has ever featured. And it was one of those rare moments that made both book and TV fans get excited, mainly because this leader of the White Walkers hasn’t even appeared in the novels as of yet.

The first time Game Of Thrones fans saw this being was in season 4 as it turned a Wildling baby into a White Walker (or White Crawler?). While never encountered, this fearsome foe has been alluded to in the books as well, often under the nom de guerre of the Night’s King during the few times he’s mentioned. From the bits and pieces dropped by George R.R. Martin in the novels, the Night’s King lived in the Westerosi Age of Heroes. To give you an idea of how long ago this was, the Night’s King lived in the period just after the Wall was completed, about eight thousand years before the events of A Game oO Thrones. The Night’s King was also the 13th Lord Commander of the Night’s Watch. Think about that: ol’ ice horns was the 13th Lord Commander, and Jon Snow is the 998th!

As legend has it, when the Lord Commander ventured beyond the Wall, he met a beautiful woman with white skin whose touch could freeze the living.  She was also said to have eyes “like blue stars.”

So as the Night’s King consummated his love with this mysterious woman, he lost his soul. The King and his ice bride took up residence in the Nightfort (remember that place where Bran and company met Samwell Tarly?). The Night’s King ruled there for 13 horrible years and performed all manner of black magic and unnatural atrocities, including sacrifices in the dark to the White Walkers. The horrors of this era came to their end when the King Beyond the Wall (a precursor to Mance Rayder) teamed with the King Brandon Stark (back when the Starks ruled the North) to defeat the former leader of the Night’s Watch. After the defeat of the Night’s King and his enslaved Night’s Watch, the Wildlings and the Starks made sure that all records of this wicked entity were stricken from history, including his name. As a result Brandon became known as both Brandon the Breaker, and the King of Winter.

Now most of those stories came from Old Nan and were told to Bran Stark in happier times. All of these legends were related to readers through Bran’s memories, so this information all comes from the recollections of a boy remembering stories told to him when he was little older than a toddler. From these memories, fans can piece together somewhat of a clearer picture regarding the history of this fierce foe. For example, Nan mentioned to Bran that the Night’s King has been rumored to be a member of the family Umber or the family Bolton. After the acts the Night’s King committed in the past two seasons, we can believe the Bolton rumor, but the truth may even be more disturbing.

According to Old Nan, the Night’s King may in fact be (hold on to your small clothes) a Stark! If that isn’t enough, legend has it that the Night’s King was not just any Stark, he was King Brandon Stark’s brother—or possibly Brandon Stark himself! Could Brandon have possibly been rehabilitated in history books as a heroic “King of Winter” by the Stark family? Now how that connects to the crippled young lord of modern day Winterfell is anyone’s guess, but these whispers of the past are intriguing, and could give readers and viewers a hint on what role this awesome new villain could play in the future.