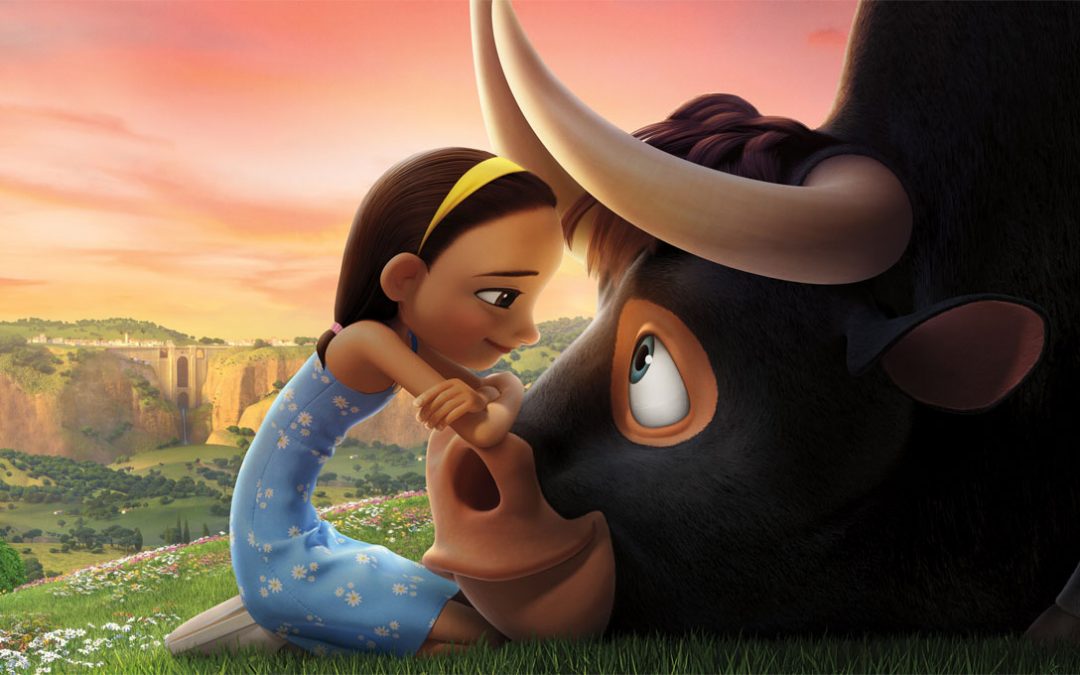 Ferdinand, the new animation from the studio behind the Ice Age films, is out this weekend. We spoke to its director Carlos Saldanha…

Published over eighty years ago, Munro Leaf’s The Story Of Ferdinand is a children’s book which has excited controversy and devotion over the decades. It was banned in Franco’s Spain, burned in Nazi Germany, and lauded elsewhere for its beautiful and endlessly interpretably tale of a Spanish bull who refuses to fight in the bullring, preferring the scent of flowers to that of blood.

For an animation studio which has already adapted the work of two US children’s fiction greats—Dr Seuss in 2009’s Horton Hears A Who and Charles M. Schulz in 2015’s The Peanuts Movie—Leaf’s story was a natural choice for Blue Sky Studios.

We chatted to Ferdinand’s director Carlos Saldanha, who previously directed both Rio films, and co-directed Robots and several of the Ice Age films, about adapting the short story into a feature film, what the lead character symbolises, and delays in production…

How important was it that the film presented a different side of masculinity?

It was very important. Because, I think when you read the book, I think it’s a simple message, a simple story, but it carries so much power. I think that’s why it became a classic. It was written in the thirties and still today, kids read it—my kids read it—it’s a very powerful thing.

I was always trying to think, what is it that makes that special? And it’s a simple thing that everybody goes through—who you really are on the inside, that’s the most important thing. The idea of being true to who you are. If you have that, if you empower kids to be confident about who they really are, not be pushed to do something else, or not be bullied to do something else and to accept others for being different. When you start to get into those issues, I think it allowed me… it gave me a lot of inspiration just to open up the book into the different layers of the message that it has.

You mention your children reading the book, when was your first encounter with this story?

The very first encounter with the story was with the [Disney, 1938] short, because I grew up in Brazil and I didn’t have the book there, so I watched the short when I was a kid. That was in the back of my head as a cute short and all that stuff, and then about seven or eight years ago I came upon the book again.

I read it with my oldest kid—my oldest kid is already twenty and I read it with her when she was little so it was a while back—but then when the book came back to me about seven years ago, everything came back and that feeling of it being such a beautiful story, so simple, so special. How can I make it into a bigger movie? And that’s when I started to re-engage with the story and the facets of all these layers that I could notice the story could take.

Luckily, when we got the property, the estate, the family allowed me to be creative and allowed me to expand the book to a movie. They knew the story was small, but I could make it bigger and that’s when I went into creating new characters and putting new voices and new issues there. In the story, the character of Ferdinand has symbolised lots of things for people – pacifism, non-conformity… what does he symbolise for you?

For me it’s just like, no matter how you look on the outside, what matters is what you really are on the inside. I think that resonated to me right away when I read the book, but the beauty of that, was, yes, sometimes you have to fight for that, but the way to fight for that doesn’t need to be violence. It can just mean by example, by being kind, by being tolerant, that’s when I started to get all these other messages coming out of that central one.

You’ve been with Blue Sky for many years now, since back when you were animating cockroaches for Joe’s Apartment. Through some kind of time travel, imagine if the you of those days could see Ferdinand, what do you think would impress him, technically and emotionally, about the film?

Oh my gosh. Technically it’s like light years ahead of when we had Joe’s Apartment. Even though back then we still had the core technology that we have now, everything was so much harder, so difficult, everything took so long and we weren’t able to use all the capabilities of our technology to do it because we were much smaller and we didn’t have as much development.

When I see Ferdinand, what we can do with elements like the environments, the flower fields, the grass and the fur… and even the characters, the amount of flexibility I have to animate him, to get every little facial movement, every little eye shift and every little muscle to have a personality. With a cockroach it was much harder, they’re like stiff.

Also, visually, we’re able now to use almost the full potential of our renderer. Back then we just used a little bit, now we use way more and I think that allows us to get richer and fuller and better pictures.

I went to the Parisian Blue Sky exhibition [May 2016, celebrating the studio’s 30th anniversary], which was terrific, and I wondered if you could choose one or two images from this film you think should be hanging in that exhibition, were it still around?

There are so many. I think one thing about this movie is every scene could be a little bit of a picture book kind of idea. I love when young Ferdinand is sitting by the tree and he smells the flower for the first time, it’s such an idyllic little world. I see that gentle face sitting down and smelling the flower. I’d love that to be a picture in a museum. The character designers were telling us that this film was in development somewhat longer than others, they said it was a matter of hammering out story?

What needed hammering out?

First I needed to figure how I can I keep the simplicity of the message of the book and expand it, and that takes a long time because you have to create characters around him to allow that message of that story to be right, but I didn’t want to take away the focus on Ferdinand. I wanted the movie to be completely from the point of view of Ferdinand, and to thread that through took a long time.

To also find the tone and find the level of comedy with emotion. I knew how the movie needed to end, and that was a good thing, because I knew I wanted the movie to end similarly to the book and I wanted to have that power and have the strength of that moment that I felt when I read the book. I knew how I wanted to end it, but then I had to create a whole thread of new story from the beginning to the middle to the end in order to make it a movie, that takes a long time.

Carlos Saldanha, thank you very much!

Ferdinand is out in cinemas this weekend.