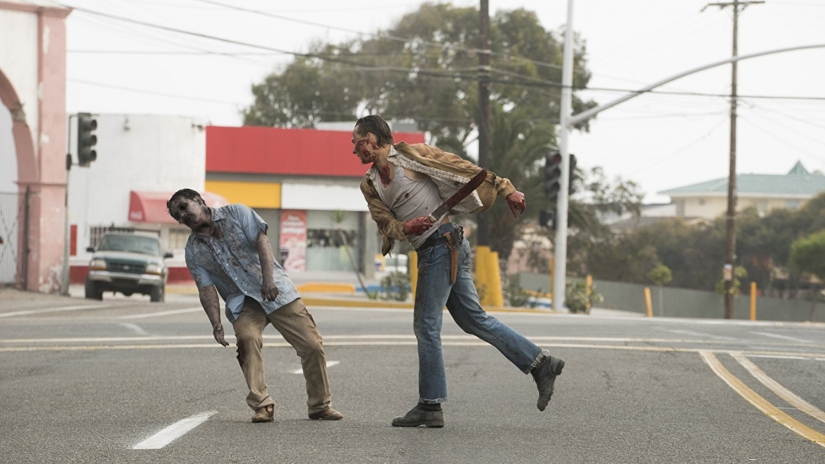 Fear The Walking Dead wraps up its tumultuous third season with an explosive finale. Spoilers ahead in our review…

As Fear The Walking Dead’s third season draws to a close with much sound and fury, I can’t help but wonder what it all signifies. This season saw the rise and inevitable fall of Broke Jaw Ranch, and also saw inevitable destruction of the dam. We witnessed many, many deaths, most notably Travis, Ofelia, and the entire Otto family. And yet, despite all of this death and destruction, the Clark family somehow stayed intact. This isn’t to say they never found themselves in harm’s way, because just the opposite is true.

The Clarks are no strangers to peril—and were often directly responsible for the chaos that killed those around them. The same can be said for Strand and Daniel, both scheming agents of chaos with more lives than a cat. As much as I’ve enjoyed watching the action and drama unfold this season, Fear wants to have it all by endangering their characters but swooping in at the last minute to rescue them. After a while, it’s difficult for viewers to suspend disbelief when a show’s key characters defy death at every turn. It’s even harder to root for these same characters when their selfishness is their biggest character trait.

Fear would have you believe that Jeremiah and Troy Otto were season three’s big bads. Or maybe Ray McKinon’s Proctor John. Or even the zombies. But in reality, the biggest threat to the Clarks are the Clarks themselves. Proctor John says it best when he drily observes, “What a perverse family you have, Alicia from Los Angeles.”

So what is the ultimate takeaway from Bad Things Begun and Sleigh Ride, the episodes that comprise the finale? Is it that Nick’s addiction is nothing more than a convenient plot device? Or that his loyalty to a killer like Troy was indefensible, no matter how hard Fear’s writers tried to convince us otherwise? Or is the takeaway that Madison’s many misdeeds are weighing heavily on her conscience, as evidenced by her vivid nightmares? Or is it that everyone but the Clarks is expendable, cannon fodder for Madison’s self-serving agenda? Or maybe it’s all of the above.

Had the show focused solely on the ranch, one could argue that season three presented a cogent commentary on the dangers of racism, that bigotry ultimately reaps what it sows. Instead, the Ottos’ racism was the elephant in the room, hinted at but never completely addressed head-on. Only at the very end did Troy give voice to the bigotry in his heart. His death was a long time coming, but it isn’t nearly as cathartic as it could have been. So the takeaway from this season, and from Bad Things Begun in particular, is that misdeeds lead to more misdeeds, that violence begets violence.

The finale is also beset by questionable character motivations, most notably Nick turning on Madison after Troy’s death. Nick may have felt he owed Troy something for robbing him of his father, but that doesn’t excuse the terrible things Troy did. Luciana certainly couldn’t forgive and forget what happened at the depot. Once she left the ranch, rather than pine for her, Nick seemingly pined for Troy. Just consider how crazy it is for Nick to call out his mother as being what’s dangerous in this world. For all the terrible things she’s done—Troy is certainly worse. For Nick not to see this defies all logic. That he would be willing to sacrifice himself in a standoff at the dam also defies logic. But his sacrifice—his self-described suicide note—is robbed of its power if he escapes death yet again. As much as I liked Nick last season, I found his journey this season to be both confusing and disappointing. Here’s to hoping we see him emerge from this a better, stronger, and more likable character.

I hope the same holds true for Madison. She’s in need of a makeover, too. If Madison’s meant to be a leader, she needs to behave more like one. Morality can’t always take a back seat to survival. We need to believe she’s capable of empathy, if we’re ever to root for her again. Moments like her competing with Troy for who is the bigger victim won’t endear viewers to her cause. Because as much as I dislike Troy, he’s right to call out Madison for destroying everything he held dear. The ranch was his to lose, not hers. Deep down she knows this, of course, and knows that there’s blood on her hands. But this is something she needs to consciously admit, otherwise she’ll never grow.

Alicia grew the most this season, assuming the mantle of leadership in a way that felt more believable. She was quick to abdicate, though, taking a more humane approach to survival—namely, no more killing. The Walking Dead’s Morgan took a similar approach last season; let’s see if Alicia has better luck as a pacifist. It’s too bad she’s sidelined in the finale—becoming more of a foil for Proctor John’s wry and withering insights about humanity in general and her family in particular.

As dynamic and engaging as Ray McKinnon is, he and his underdeveloped proctors felt shoehorned into the end of the season. Still, Proctor John holds a lot of promise for what may come next season. He reminds me of David Morrissey’s Governor, if he had Negan’s Saviors to enforce his agenda. In this case, Proctor John intends to establish a trade route between Houston and San Diego—and the dam figures prominently into that plan. Or at least it did.

By finale’s end, the Clark family has survived a catastrophe only to be separated yet again. Strand and Daniel have also survived, despite their best efforts to kill each other this season. So have Walker and Lee, who are striking north for more hospitable climes. Lola and Éfrain, however, aren’t so lucky. The first half of season three suggested we might get to know more about these two, but it isn’t meant to be. They died so the Clark family legacy might continue. To quote Kurt Vonnegut, “And so it goes.”