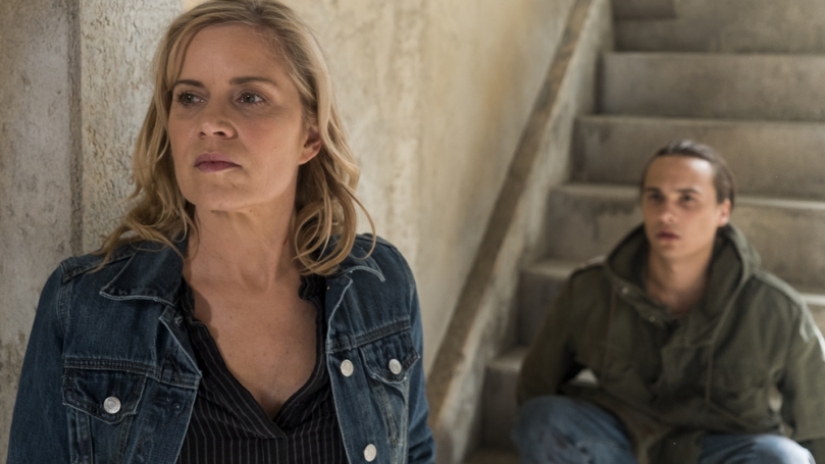 Is the Clark family the third wheel of the zombie apocalypse on this week's Fear The Walking Dead?

For a drama-heavy hour with so much promise, I wanted to like Red Dirt more than I did. Indeed, this episode has domestic drama to spare, presenting a family rife with dysfunction. This is great from a storytelling perspective—the more conflict, the better. The only problem? The heart of Red Dirt rightfully belongs to the Ottos, and yet they’re forced to share the spotlight with the Clark family. Had this not been the case, this could have easily been a top notch episode. The Otto family is slowly coming apart at the seams, and as such, so is the insular community that calls the ranch home. The Clarks should be bearing witness to this, rather than being integral to the ranch’s continued survival.

Case in point? The mission debriefing. Jeremiah calls out Troy for being sloppy, for letting his bloodlust get the best of him, which is fine. It’s also fine that Madison is present to vouch for him. But other than the story demanding she be there, why is this newcomer part of this inner-circle/family discussion? This would have been a more powerful scene had she not been in the room at all. “This is my business to manage,” Jeremiah says to Madison. It’s not hard to imagine he’s addressing this comment to FTWD’s writers, who in turn are using this same line of dialogue to somehow justify her presence.

At the same time I do credit the writers for using this scene to acknowledge the issue of race, the spectre of which was raised in the season premiere. Nick broached the subject last week with Jeremiah, and now it’s Madison’s turn to do the same. While I do think this could have been a stronger conversation had it been among ideologically incompatible family members, the writers make the most of Madison’s penchant for overstepping her bounds. In the process, we see more of the real Jeremiah, a man who reacts poorly to what he considers “liberal judgment.”

His assessment of the Black Hat reservation may be blunt, but it’s also unkind. Not for describing the realities of an impoverished, indigenous people, forced to live in squalor on the fringes of the land that was once rightfully theirs. No, it’s Jeremiah’s lack of compassion or understanding of the irony that caused this fate to befall Qaletqa Walker’s tribe in the first place. He doubles down on his insensitivity by insisting that the reservation was a vice-addled hellhole before the apocalypse.

“All civilisations are born of violence,” Jeremiah goes on to say. But it also goes without saying that civilisations die in violent fashion, too. Even Vernon Trimbol (Hugo Armstrong), one of the ranch’s two remaining founding fathers, understands that violence begets violence. Vernon has woken up and he’s smelled the proverbial coffee; he knows the ranch is unsafe, and he’s ready to take his family and leave it behind. And here, again, is another strong story moment, one that questions loyalty versus survival, family versus community. It also questions the existence of property borders bound by now-irrelevant laws. The courts may have held the Black Hat tribe at bay, but no more. Again, no matter how dutifully FTWD’s writers may try, the rise and fall of the ranch is the Ottos’ story to tell. The Clarks are here as a third wheel, appropriating another family’s story in the same way the Ottos usurped the Black Hat tribe’s land.

The bad blood between Troy and the Trimbols is immediate. To him, they’re not just giving up on the ranch, they’re also giving up on him and the blood he’s spilled to keep the community going. Jeremiah’s offhanded explanation for Vernon’s sudden change of heart does little to win hearts or minds. “Some men, they have kids,” Jeremiah says. “Turns them into women.” If racism can still flourish in the apocalypse, why not old-world sexism, too?

In any case, the confrontation at the gate as the Trimbols try to leave is one of the episode’s dramatic high points. The Otto family is warring with itself over ideals that may no longer matter in the grander scheme of things. What the world considers right or wrong, just or unjust, was severely skewed once the infection took its first victim and made the dead walk again. Like Nick said in Burning In Water, Drowning In Flame, it should be us against them, the living versus the dead. But Jeremiah is too set in his ways, too comfortable in his racism, to truly be an effective protector to his family or anyone else on the ranch.

As for Troy, he’s still the little boy at heart who’s never known of a real life outside of the ranch. Vernon’s son Mike (Justin Deeley) was a big part of his sheltered childhood, sticking with Troy through thick and thin. It’s Mike’s betrayal that hits him the hardest. Daniel Sharman is excellent in this regard, showing us a character that is wounded and vulnerable, yet somehow stronger because he’s hurting. Again, Troy coming to grips with the Trimbols’ exodus could have been more powerful if he weren’t sharing the spotlight with members of the Clark family. And how much stronger might the Trimbols’ fate had been if their fate been discovered by the Ottos alone? Taken one step further, how much stronger had the Trimbols’ grisly demise been, had the circumstances surrounding their deaths been kept ambiguous?

Of course, this important nadir between founding families is robbed of some of its power by making the moment more about Madison’s lie. Somehow it’s now up to a relative newcomer to save a community she isn’t a part of. I’m with Nick—I understand the reasoning behind this, but I don’t like it. And while on the subject of Nick, I actually liked his scenes with Jeremiah and Troy. They aren’t as contrived as Madison’s interactions are with the Ottos. His scenes especially with Jeremiah, who’s hitting the bottle again, speak a lot to the addict Nick once was and how far he’s come. So it’s a little easier to forgive what might have been if instead it was Troy caring for his drunken father. We already know he cared for his drunk of a mother in her last days. Imagine how powerful it might have been to see Troy at his best, caring for someone at their worst. Just a thought.