Fear The Walking Dead season 3 episode 13 review: This Land Is Your Land 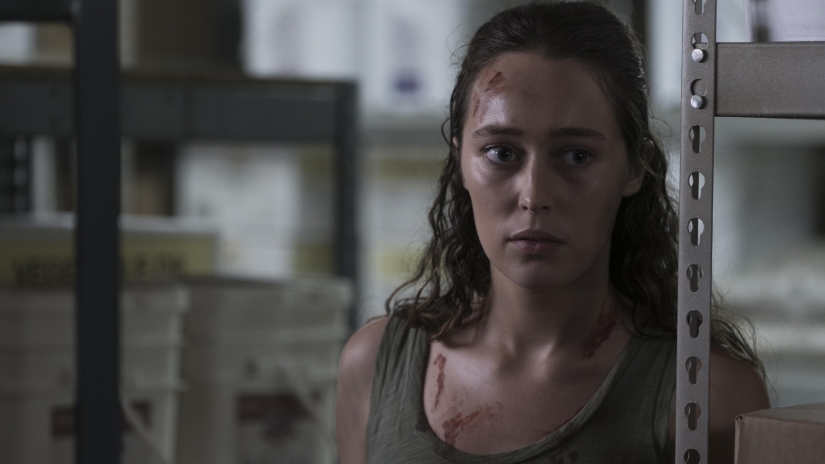 Well, it was only a matter of time before the ranch fell, but did anyone expect it to happen quite in this fashion, or so soon before the end of the season? Still, Jeremiah Otto’s legacy doesn’t go out with a whimper—resulting in one of the strongest episodes of the season, if not the entire show itself. A couple of minor points bog things down here or there, but overall, This Land Is Your Land vaults Fear The Walking Dead onto the same level as The Walking Dead. And a lot of the credit for this goes not only to writer Suzanne Heathcote (who also penned this season’s excellent Burning In Water, Drowning In Flame), or to first-time Fear director Meera Menon, but to Alycia Debnam-Carey as well. Especially Debnam-Carey, whose performance in This Land… gives us an Alicia that is bold but not fearless, brave but vulnerable, elated yet in mourning. Debnam-Carey is always solid, but this hour of television is truly transformative.

While the survivors may have found refuge in the pantry, their very salvation is also the means of their own demise. Thanks to a blocked vent, the bunker has about two hours of oxygen left. This conflict alone is enough to drive the entire hour—but Fear doubles down on the drama by revealing that some of the survivors have been bitten. So not only is This Land… a race against suffocation, Alicia and company must contend with potential zombies in their midst.

Most of the scenes in the bunker are shot very tight and very close, with a shallow depth of field. Menon and director of photography Scott Peck choose what we see and when we see it. The resulting shifts in focus are intimate, to the point of claustrophobia. There’s no escaping any of this, for those in the pantry or us at home—we’re in this together.

This tight framing has its real payoff in a quiet character moment between Alicia and fellow rancher Christine, played with lived-in hope and weariness by Linda Gehringer. The two enjoy an unexpected heart-to-heart chat, remembering better, bygone times filled with the sorts of simple pleasures that are so easily taken for granted.

Debnam-Carey is strong throughout the hour, but she’s at her best as she recalls a funny childhood moment with Nick. The camera wisely lingers on her face, allowing us to see the humour and sadness warring behind her large, expressive eyes. This is the happiest we’ve ever seen Alicia. She’s at her most vulnerable, too, letting her guard down long enough to let some light into her burdened heart.

Troy, on the other hand, is enjoying himself a little too much, taking glee in the bloody chaos and carnage. Surrounded by the dead, he’s suddenly euphoric, a kid in a candy store. I’ve often heard the argument that TWD’s Daryl only came into his own after (and because of) the apocalypse. The same could be said of Carol, too. But Daryl and Carol don’t delight in killing zombies the way Troy does. He’s a Lost Boy in this way, a product of an unstable childhood and an isolated upbringing. Nick is a lot like Troy in this regard, bringing a specific kind of street smarts to the table but still liable to making terrible decisions that get people killed.

Alicia is the flip side of this, thinking before she acts. Her choices weigh heavily on her. We know her actions in the bunker will stay with her to the very end. Killing zombies is one thing, but killing the living—even in the name of the greater good—has killed something vital in Alicia that she will likely never get back. In this respect, Alicia is a leader. “Uneasy lies the head that wears the crown,” after all.

The worst part of this sacrifice, however, is that it’s in vain. The bitten are put down, but nearly everyone in the bunker suffocates to death, unleashing a new kind of close-quarters terror. Alicia can barely stand, let alone fend off the newly turned. Unlike the end of Brother’s Keeper, I had no doubt that Alicia would survive the episode. What was more surprising to me was how Madison, Strand, and Walker rode in like the cavalry to save the day. (Seriously, I don’t think I’ve ever been happier to see Madison.)

While one could argue that this is too contrived a resolution, I think Fear has earned this moment of true salvation. Because in the end, Alicia knows the truth, that no place is safe, that safety is an illusion. That no place is worth killing or dying for. So it makes sense that she’s striking off by herself. Alicia is more alone than ever now, but she’s at least able to live and die on her own terms.

If you read my review of Brother’s Keeper, you know I suggested it might have been a stronger episode had Fear killed Alicia, Ofelia, and Crazy Dog off as the zombie hordes closed in. Not killing the three of them in that moment felt like Fear was pulling a punch. But, that being said, had I chosen that particular end for that adventure, the events of This Land would never have transpired. And I’ll admit it: I’m glad (and relieved) Alicia’s survived to see another day.