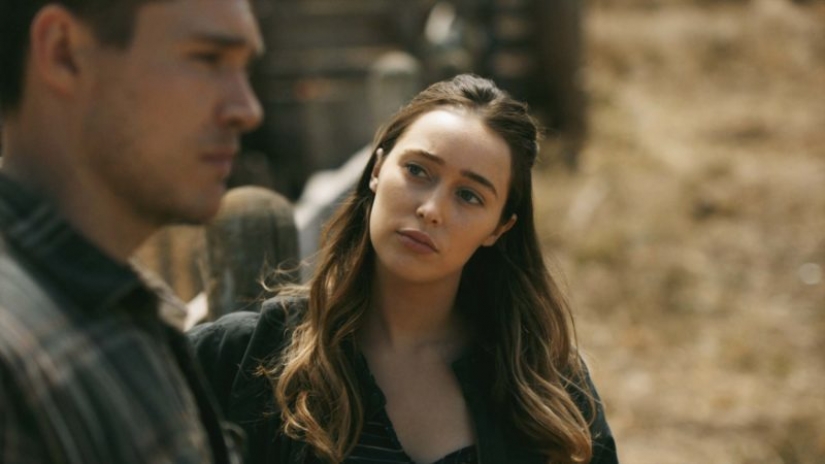 As I watched Brother’s Keeper I couldn’t help but think that if Fear The Walking Dead’s third season were a Choose Your Own Adventure book, every plot choice would hinge on the Clark family making a bad situation worse. That’s especially true of this episode, in which Nick is indirectly responsible for killing Jake. Had he let the Otto brothers sort things out, there’s a good chance Jake might have survived. And while he might have survived this particular encounter, there’s also a pretty good chance Jake wouldn’t have survived until the end of the season. How could he, when he was constantly portrayed as too emotional and too cerebral for the grim realties of the zombie apocalypse. By now it’s obvious the Walking Dead universe tends to equate morality with weakness. Travis was a perfect example of this. And we’ve seen this play out plenty of times on TWD (Dale and Tyreese immediately spring to mind). Aside from a few exceptions on either show, the meek shall not inherit the earth.

But at least Jake had a chance to call out Alicia’s manipulations before he bowed out. Just as Madison got called out for her myopia by Walker in last week’s La Serpiente, Jake does the same now with Alicia. And who could blame him? Alicia’s talk of “we” and “us” falls flat without any genuine emotion to back it up. Which is why he cuts to the quick with her: Is what they share a relationship or an alliance? By telling Jake to go to hell, Alicia shows her hand, though the truth is all over her face, too. Alycia Debnam-Carey is strong in this scene as she vacillates between indignation and anger and defensiveness. There’s a bit of fearfulness in her eyes, too; she needs the ranch more than it needs her. “You’re the last good man I know” may sound convincing in that moment, but it also sounds like the last good excuse she knows. Alicia was far from sympathetic this week, but she doesn’t need to be, either. Nick was my guy last season, someone to root for. But as much as Alicia is hitting a lot of wrong notes lately, she’s one of this season’s more fully realised characters. She’s been through a lot, and it’s really starting to show.

Which is why I really felt Alicia should have bowed out in this episode, too. But more on that in a bit.

In the meantime, it’s worth noting that Brother’s Keeper went to great lengths to explain why Nick feels beholden to Troy. It’s almost like Luciana never existed, or that Troy never committed atrocities in the name of “research” (especially since that same research fails him when confronted by Jake’s zombie bite). Daniel Sharman is a charismatic actor, which makes it easier to believe the cult of personality that holds the ranchers in Troy’s sway. Charisma or no, while it’s impossible to keep one’s hands clean in an apocalypse (figuratively and literally), Troy’s past cruelties transcend what’s necessary for survival. The colour of one’s skin should not be a prerequisite for protection against the undead. So the idea that Nick somehow owes Troy a debt for killing Jeremiah is a bit of a stretch. Plus, such story machinations only wind up normalising a dangerous person.

Over the course of three seasons we watched the Manawa clan slowly die out. Now, we’re seeing the culling of the Otto bloodline. (Unless Alicia is pregnant, and I don’t think Fear‘s writers will go down this road.) We’re seeing shades of the Dixon brothers here with Jake and Troy, with the same sort of yin-yang dynamic—and a similarly tragic resolution. But how much more poetic would it have been for undead Jake to finally kill Troy?

Which brings us back to Alicia—and the encroaching horde of zombies. This is definitely the biggest horde we’ve seen on Fear so far. There’s very little the ranchers can do except circle the wagons and stand their ground. Their defence of the homestead is one of the episode’s high points—and one of the best moments of the entire season. Indeed, this is the way the show should have returned from its mid-season break, with something truly epic and deadly. The RVs are ultimately ineffective against the hundreds of corpses shoving their way into the ranch. Coop goes out like a hero, defending friend and foe alike. Justin Rain’s Crazy Dog is likewise heroic, defending the living against the dead. In these last moments of the standoff, as Alicia, Ofelia, and Crazy Dog found themselves surrounded, I really and truly believed none of them would make it to the pantry. (And, seriously, why was retreating to the pantry not Plan A in the first place?)

Travis’s death earlier this season was a shock to the system but it was also an important reminder that no one in this world should be safe. So to lose several characters—especially Alicia—would have been a daring choice for Fear to make. This is not to say the show played it safe, but sometimes the most satisfying outcome of a Choose Your Own Adventure story is the ending you never see coming.