Doctor Who: “you never know”, says John Simm on returning 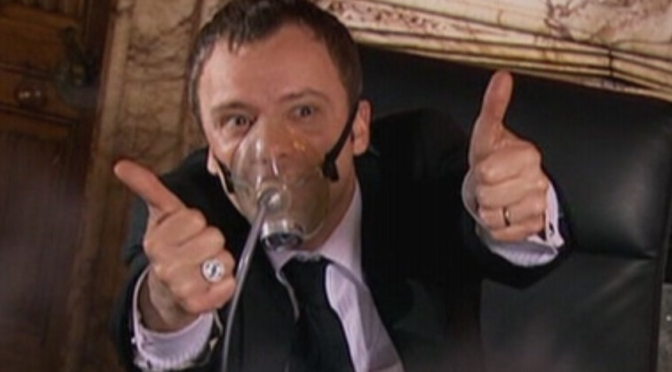 John Simm isn't ruling out another return as The Master, given the unexpectedness of this year's one…

This article contains spoilers for the Doctor Who series 10 finale, The Doctor Falls.

John Simm’s return as The Master, in Doctor Who series 10’s finale episodes, was a lovely surprise. (Albeit one that was spoiled by the show’s own adverts, many months in advance.)

Interestingly, showunner Steven Moffat left both Simm’s Master and Michelle Gomez’s Missy mortally wounded at the end of the finale, but stopped short of showing either of them even starting to regenerate.

Is Simm expecting to return again, then? Doctor Who Magazine (issue 514, out now) asked Simm that very question, and here’s what he said…

“You know what, I don’t know. I mean, I wouldn’t have thought in a million years that I’d be back [in 2017], yet here I am talking about it, so never say never.

“So you never know. This thing called Doctor Who is a machine that just sort of goes on its own. It’s got its own rules. And if they want you back, then great. I would definitely think about it.

“Will they ask? I doubt it. But I don’t know. I mean, I’m very, very lucky to have worked with two Doctors. Two brilliant, brilliant actors. So if not, I will count myself blessed to have been asked back; to have played him these two times. That’s wonderful. And we shall see. Who knows? Yeah, never say never. That’s very true.”

Indeed, it’s wise never to rule anything out with Who, especially when the death-defying Master is involved. By leaving Simm and Gomez’s characters not quite dead at the end of series 10, outgoing showrunner Steven Moffat has left a bit of wiggle room for the next head honcho – Chris Chibnall – to do whatever he wants with.

Moffat and Peter Capaldi have one more episode to go: the 2017 Christmas special, which sees a mortally wounded 12th Doctor sharing the screen with the original Doctor (played now by David Bradley).

We’ll keep bringing you all the Who news we hear. Thanks to DoctorWhoTV.co.uk for sharing this story online.