Doctor Who, and the casting of soap stars in the show 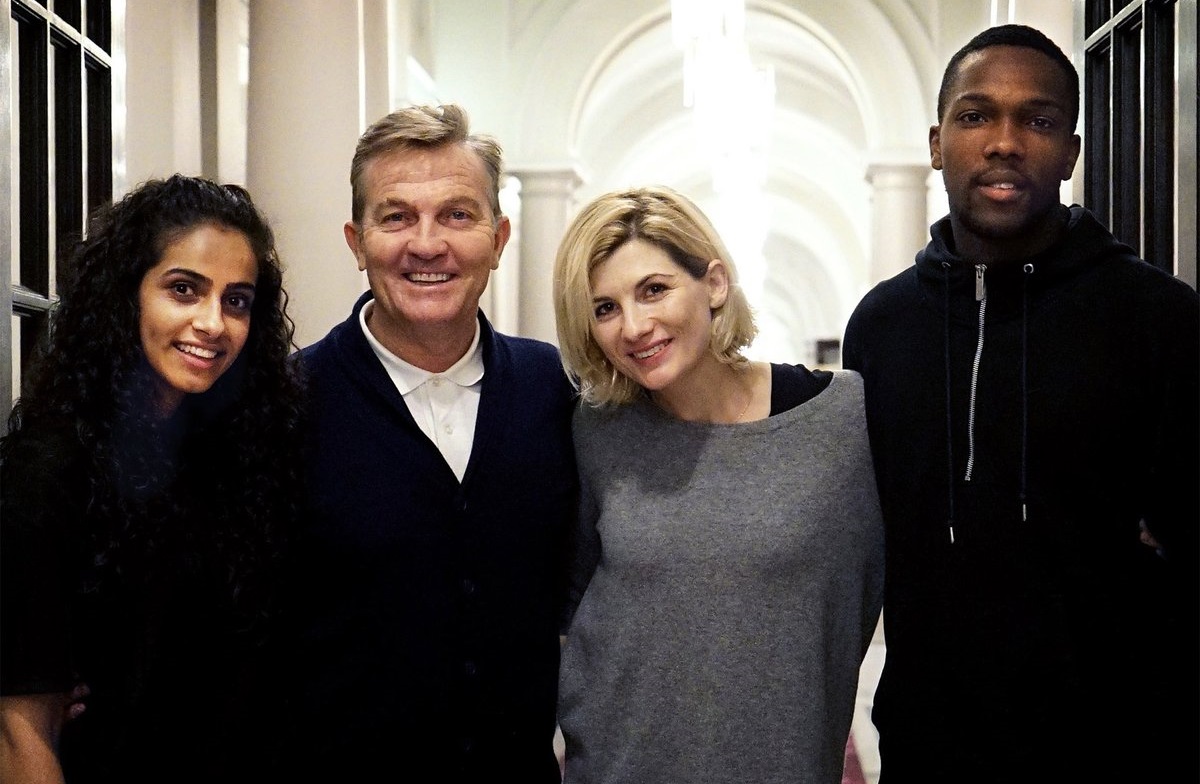 As Doctor Who series 11 adds a trio of soap opera stars to its cast. And it makes sense…

What do Mandip Gill, Tosin Cole and Bradley Walsh have in common? Other than the fact that they’re all joining Jodie Whittaker’s Doctor as part of the regular cast of Doctor Who‘s next series, they’ve all acted in soap operas. Even 12 years since the show was revived by a former Coronation Street writer, that still makes some fans nervous.

Whatever your thoughts on Corrie, EastEnders and other serial dramas (to give them their proper name – the nickname comes from an outdated observation about soap companies sponsoring many of them), they’re the best, most relevant training ground for young actors in British television. It’s also more relevant to the experience of working on Doctor Who than you might necessarily expect.

We won’t go so far as Doctor Who Magazine issue 428 did back in 2010, with their rip-roaring one-off edition using the Inside Soap magazine layout and format, and articles likening the show itself to a sci-fi soap opera. As they argued, Doctor Who is a returnable format, which was on almost every week of the year when it first began, that has had numerous cast changes over the years, and is adored by those who follow it. All of this is accurate, but that’s not what makes some former soap stars such a good fit for the show.

For starters, the production schedule is relevant. If you’re a regular character in a soap, you have to be there and working all year round to meet the demand of producing several episodes a week – just this year, Corrie‘s output has increased to an unprecedented six weekly instalments. David Tennant, Matt Smith and Peter Capaldi have all been vocal about the physical rigours of playing the Doctor. Back when Doctor Who Confidential was on, you’d often see shots of the cast on night shoots, with frosty breath at 4 in the morning. Even with a reduced episode count, ten new instalments of Doctor Who will take nine months to make, shooting for long hours in and around Cardiff, with a core cast that has to be there most of the time. Serial drama is much a proving ground in actually working in television productions as it is for acting. On that score alone, long-term soap experience can be worth more on Doctor Who than most anything else an actor can do.

The notion that Doctor Who is different as a genre show doesn’t wash either. In recent years, soaps have been getting ever more ambitious with stunts, and the actors will have to take these complicated technical setups, including explosions, vehicle crashes or other massive spectacles in their stride. Anyone who’s on a soap for more than six months is going to run into one of these event storylines at one point, and combined with the intensive schedule, you could be forgiven for thinking that Doctor Who looks like a doddle in comparison.

Aside from the work ethic on soaps, let’s not forget that the new regulars have all done other things too. Walsh might be best known as the host of ITV’s The Chase right now, but he’s acted before, not least as a Pennywise-styled Pied Piper in The Sarah Jane Adventures. When the Mirror threw his name into the running earlier this year, there was much discussion of his previous work with incoming showrunner Chris Chibnall on Law & Order: UK, but he also proved his acting chops during his Corrie stint as factory boss Danny Baldwin from 2004 to 2006. On another note, we think his casting is the most promising sign yet that Chibnall might give us another Brian Pond type, the character he created for Dinosaurs On A Spaceship and The Power Of Three, who was so brilliantly played by Mark Williams.

Elsewhere, it feels as if those who are upset that the new series’ regulars include not one, but two actors from Hollyoaks don’t actually watch Hollyoaks. Maybe they don’t know that the writers named the Lomax sisters after Leela, Tegan, Peri and Rose, so there’s something of an appreciation for Who behind the scenes at least.

But yes, it’s a show set in a village with an extraordinarily high cast turnover thanks to the number of serial killers and explosive accidents in the proximity. This means it’s also a show that employs a lot of young actors, which will inevitably entail some new discoveries, and can often mean a breakthrough to other things, as it did for the likes of Warren Brown, Nathalie Emmanuel and Will Mellor.

It’s not all these particular alumni have done either. Cole, who will play Ryan, will become one of the only actors to have appeared in both Star Wars and Who, having played an X-wing pilot in The Force Awakens, and he’s also great in Reggie Yates’ short film Shelter, which is available on BBC iPlayer. And before we see her as Yasmin, Gill will appear in Kay Mellor’s Love, Lies & Records and alongside Game Of Thrones‘ Iain Glen and Lena Headey in next year’s British immigration drama The Flood.

We could point out that these apparently legitimate concerns have arisen with almost every companion cast since the series returned, from Billie Piper (‘She’s that singer who was married to Chris Evans!’) to Pearl Mackie (the dumber range of ‘theatre actors can’t act for camera’ comments was very silly). As far as we can remember, only Karen Gillan really evaded this, because of the extremely relevant experience of having been in The Fires Of Pompeii before she was cast as Amy Pond. But without exception, they’ve gone on to be great in the show. Psychologically, the ‘sky is falling’ mentality feels hard-wired into a fandom that went years without new Who, and has been inherited through osmosis by a certain, highly engaged group of post-2005 followers. When the show was put on an indefinite hiatus in 1989, it was getting trounced in the ratings by Corrie, and that’s one factor that comes back in the anti-soap sentiment that has nothing to do with its relative quality.

Davies’ revival of the show in 2005 was clearly mindful of other popular TV dramas and American equivalents, but as DWM and others have argued, soaps have been far more influential. The home base of the Powell estate in 2005 fulfils the promise that Rona Munro’s Survival made back in 1989, and even carrying through into the intensive continuity and long-term character-based storylines of Steven Moffat’s era, it’s given the show an inner life that appeals to audiences.

That’s why Doctor Who doesn’t get the ratings Buffy The Vampire Slayer did on BBC Two – at its peak, it was getting Corrie numbers, and that’s why it’s lasting in the contemporary era. Even as viewing has changed and overnight figures have become less relevant in measuring a show’s success, it’s still up there with the soaps.

And so, casting soap stars has come part and parcel of that outlook and influence – it pays to be on top of what’s going on with upcoming talents. There’s a strong track record of former soap stars making great turns in the new series, without even counting guest roles. Freema Agyeman got her first break on telly in Crossroads before she was cast as Martha Jones, and Jenna Coleman and Samuel Anderson were both former Emmerdale regulars before they played partners Clara Oswald and Danny Pink.

In terms of guest stars, Suranne Jones and Katherine Kelly were tearing each other’s hair out on Corrie 15 years ago, and they’ve both made lasting impressions in the Whoniverse, as the TARDIS in The Doctor’s Wife and Miss Quill in BBC Three spin-off Class respectively. Sarah Lancashire started on the cobbles too, and went on to be one of the finest actors working in British television. Many of her peers have similar origins. The ITV dramas of Ross Kemp* may be a powerful argument against building vehicles around soap alumni, but this isn’t that. It’s drawing talent from a pool of actors who have come up working really, really hard on their characters. The only reasonable argument against this sort of casting that we’ve heard is that it sometimes jars continuity-wise.

We’ve written elsewhere about the show’s ties to EastEnders, but it becomes a little mind-boggling when Army Of Ghosts starts with Jackie Tyler watching a ghost storyline unfold in the Queen Victoria and then doesn’t comment when Tracy-Ann Cyberman looks just like Dirty Den’s ex Chrissie Watts. This feels like the only phenomenon of continuity that the outgoing Moffat hasn’t yet dedicated some part of his era to resolving. Children In Need is on next month, so there’s still time for another Dimensions In Time!

In the main, the sheer size of the new regular cast suggests that Chris Chibnall’s Doctor Who might be more ensemble-led, going right back to the original 1963 arrangement of the Doctor having three companions. But it’s the make up of this ensemble that’s so exciting, putting a stalwart screen presence like Walsh and two up-and-comers next to the first ever female Doctor, all with experience in long-running drama roles. Hopefully, this time next year, they’ll once again underline the wisdom of casting soap stars in the most endlessly renewable sci-fi show around.

*Now there’s a future DoG feature idea for you…