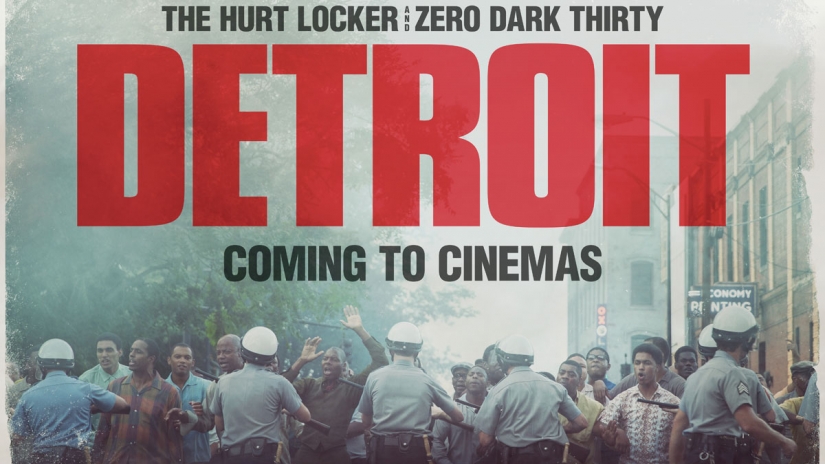 Zero Dark Thirty's Kathryn Bigelow directs an intense film about a dark chapter in US history. Our review of the brilliant Detroit…

For at least an hour, Detroit is, in effect, the most horrifying home invasion film in recent memory.

In the midst of the riots that left parts of the Michigan city capital ablaze in 1967, three cops barge their way into a low-rent hotel and terrorise the largely black guests inside. They’re ostensibly looking for someone who fired shots out of a top-storey window – actually a prank involving a starting pistol – but in reality, this is a pretext for a sadistic, racially-motivated bout of violence, intimidation and ultimately murder.

Zooming further out, Kathryn Bigelow’s latest film is a meticulously researched and mounted period piece detailing a real incident; an account of the split-second decisions, misconduct and inhuman acts that emerged from an already dark chapter in American history. Written by Mark Boal, who also wrote Bigelow’s Oscar-winning Zero Dark Thirty and The Hurt Locker, it’s an unforgettably disturbing film that defies easy description; I can only say that it left this writer reeling.

Shot in a grainy, handheld style that dovetails with the news reports and still images Bigelow intercuts with her own footage, Detroit follows the movements of those involved in the incident at the Algiers Hotel. As the police and National Guard make brutal attempts to restore control across the city, a young singer, Larry (Algee Smith) and his best friend Aubrey (Nathan Davis Jr) are forced to seek refuge in an $11-per-night room at the Algiers. Only a few yards away, security guard Melvin Dismukes (John Boyega) is standing sentry at a grocery store for the night. When shots ring out from the nearby hotel, and a group of soldiers from the National Guard head over to investigate.

There, Melvin encounters Krauss (Will Poulter), a Detroit officer who has no problem with shooting unarmed, fleeing looters in the back. Along with two other cops, Demens (Jack Reynor) and Flynn (Ben O’Toole), Krauss begins to search the building – and, as they drag its residents out of their rooms one by one, the depth of his racism – and possibly psychosis – is revealed.

When the cops find a pair of white girls (played by Hannah Murray and Kaitlyn Dever) in the same room as a Vietnam veteran, Greene (Anthony Mackie), they automatically assume the latter’s a pimp; seemingly enraged by the presence of white women in a hotel largely populated by black men, their intimidation soon tips over into horrific violence. Detroit’s one of those films where the incidents are so upsetting that your humble writer wanted to shout at the screen, or run up to the projection room and turn the thing off. Believe it or not, this isn’t a criticism.

Unflinchingly, Detroit paints an ugly portrait of a country divided by racism and normalised violence. Aided by Barry Ackroyd’s intimate cinematography, Bigelow’s film immerses the viewer so fully in the experiences of its African American protagonists that the sense of oppression and fear radiates from the screen. Beyond the toe-curling scenes at the film’s centre, there are also the quieter but no less disturbing moments of racism – the contemptuous glances, the subtly demeaning aside from a cop or a lawyer. Bigelow captures all of this through her superbly understated style of filmmaking.

The performances are similarly natural and raw, from Will Poulter’s renegade officer – who seems to have an internal rationalisation for everything he does, no matter how  despicable – to John Boyega’s quietly outraged security guard. Towering over everyone else, however, is relative newcomer Algee Smith; as a smiling, optimistic soul singer with dreams of stardom, his character arc is the most poignant of all.

There are sustained moments of heart-in-the-mouth, outright terror in Detroit, but the overwhelming sensations it leaves behind are anger and frustration. Anger that such atrocities could occur in the richest nation on Earth; frustration that, although the events in Detroit occurred some 50 years ago, such racism and abuse is by no means a thing of the past.

Detroit is an assaultive, harrowing film, and at times difficult to watch, but it’s also heartfelt and urgent.  It is, quite possibly, Kathryn Bigelow’s masterpiece.

Detroit is out in UK cinemas from the 25th August.