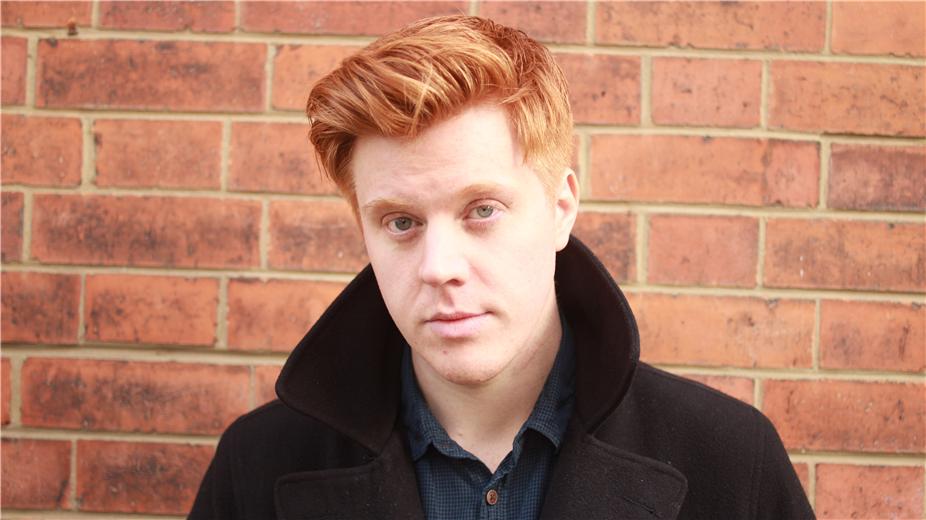 A big hit at Horror Channel FrightFest, we chat to Danny Morgan about the upcoming horror, Double Date…

London-born actor/writer Danny Morgan (Off The Hook, Ideal, On The Road) had a very good reason for turning to the horror genre when it came to writing his first screenplay. “I thought that was a genre I could do something in, because there are so many crap horror films. I thought ‘well, it’s not going to stand out horribly if it’s completely terrible’. So I went into it with a good frame of mind!”

It’s a characteristically self-deprecating remark from Morgan who, along with director Benjamin Barfoot, can rest assured that Double Date is one of the funniest and most entertaining British horror comedies of recent years. Following screenings at Karlovy Vary and Edinburgh, it brought the house down at this year’s London’s Horror Channel FrightFest, where Morgan also won the Screen International/FrightFest Genre Rising Star award.

As well as writing the film’s screenplay, Morgan also takes the lead role of Jim, a red-headed virgin who, on the eve of his 30th birthday, is persuaded by hapless yet well-meaning best friend Alex (Michael Socha) to venture out on town. When the pair meet secretive sisters Lulu (Georgia Groome) and Kitty (Kelly Wenham), the quartet embark on a night of adventure that gives a whole new meaning to painting the town red. Packed with blood, guts and plenty of belly laughs, Double Date benefits from a sharply observed, quick-witted screenplay that offers a wry commentary on the minefield of modern dating while also indulging in the traditions of the genre. It’s an accomplished effort from a first-time screenwriter but, admits Morgan, took years of hard work.

“I wrote a really rough, all over the place script, I didn’t know how to write a screenplay at all,” he recalls. “But luckily I randomly bumped into [producer] Matt Wilkinson in a bar somewhere. To this day I don’t remember meeting him, but I woke up with his business card in my wallet. So I sent him the script, and he saw enough in there to say ‘I’m going to come on board and help you mould it into something’. Then he spent the next year or so teaching me how to write screenplays, and we spent what felt like 40 years developing it before showing it to people. Things went from there.”

As Morgan and Wilkinson were tightening the screenplay, they were also thinking about directors for the project. Morgan had Benjamin Barfoot in mind from the beginning, having worked with the filmmaker at MTV and then on a number of well-received shorts including Harry Potter satire Where Did It All Go Ron? “Matt really loved that short,” says Morgan, “and the people he showed it to could see that Ben and I had a good way of working together. I was thrilled when he got the job. I was like ‘Fucking hell, we can go and have fun!’” That sense of fun is evident in the finished film, which makes the most of a talented young cast clearly having a ball in roles that allow them to run the gamut from drunken dancing to balls-to-the-wall combat. While Morgan always knew he was going to play Jim — “One of the reasons I wrote it was because no one is going to give me the part of the leading man who gets the girl!” — he knew that casting the other parts had to achieve the right four-way dynamic. No easy task, it transpired. While Kelly Wenham was on board from the start, having nailed the role of Kitty in a two-minute teaser shot for the film, Morgan admits the remaining two roles came down to the wire.

“A couple of weeks before we started shooting, we didn’t have an Alex or a Lulu,” he says. “As you can imagine, we were pretty terrified. Our brilliant casting director Anna Kennedy basically said, ‘Here’s Georgia Groome, here’s Michael Socha, you’re having a meeting with them’.

“As soon as we met Georgia, I was like ‘Shit, yes, that’s Lulu’,” continues Morgan. “The thing about Lulu is that she doesn’t say much so there’s a lot going on in her eyes, and Georgia nails that. And Michael came in for a meeting really hungover, and we just sat, chatted and laughed our arses off. He and I got on really well immediately which was great because, to me, the most important thing about the film is that the relationship between Alex and Jim needs to feel really authentic. And Michael is so great with improvisation that we were able to build this believable rapport.”

Also taking a small role in the film is British industry veteran Dexter Fletcher, who plays Alex’s dead-beat dad Ken; a part which adds both humour and a necessary sense of pathos to proceedings. And, says Morgan, landing Fletcher was another fortuitous piece of casting luck.

“It was another one of those things where we were halfway through the shoot and we still didn’t have a Ken,” recalls Morgan. “One of our producers, Maggie Monteith, knows him, sent him the script and said ‘Do you want to come down for a day and have fun improvising with these guys?’ Luckily he said yes!

“This was a point that was very important story-wise, especially for the character of Alex,” Morgan continues of the pivotal sequence. “Michael was worried that Alex was too much of a dick, which is a fair concern when you read the script. But we kept insisting that there were going to be these moments when you would see a different side to him, like when he is with his Dad and he gives him a little kiss. I knew I wanted moments like this. Showing the vulnerable side of a character is a great way to get the audience to care about them.”

And while Morgan’s Jim has some memorable moments of his own — not least a drug-fuelled one-man dance-off in his bemused parents’ living room — it’s to Alex that the film’s epic climactic battle belongs. It’s no spoiler to say that Kitty and Lulu aren’t the sweet and innocent girls they appear to be, and Alex finds himself in a no-holds-barred fight for his life with a very unhinged Kitty. Not only is it a brilliant scene, but it’s refreshingly unapologetic in its celebration of a female character who can both fight and be fought with. “It’s funny watching that scene with audiences, they really get it,” says Morgan. “It’s mental, but you’ve established Kitty as such a psycho that you don’t really mind that all this stuff is happening to her! And Kelly really trained like mad, and was genuinely kicking Michael’s ass.

“The whole scene, that’s all Ben,” Morgan continues of the director’s involvement. “I’m not interesting in writing actiony stuff. In the script, it was just ‘Alex and Kitty have a huge fight that goes on for ages’. So Ben took that and choreographed this huge fight. Then you put Michael into that situation and he improvised pretty much all of that stuff, all of his brilliant lines like ‘C’mon, let’s just have a truce!’. That’s another example of Michael being funny but also totally truthful to how the character would react in that situation. He doesn’t want to fight her, he knows he’s not supposed to punch a woman in the face, but he’s also fighting for his life.”

The resulting sequence is funny and brutal in equal measure, much like Double Date itself. While Morgan admits that he started off writing the film as a straightforward horror, he says that the emphasis on the comedy — which emerged during test screenings, as audiences responded strongly to the dynamic between the boys — is something he’s very pleased with. Particularly as it puts the film in the same realm as one of his all-time favourites, Edgar Wright’s seminal Shaun Of The Dead.”

“Obviously Shaun Of The Dead was a huge influence on everyone who saw it,” says Morgan, who also counts films like Withnail And I, Swingers and Clerks among his inspirations. “I still remember watching it at university, and getting a little stoned before I went into the screening, and being blown away by how brilliant it was. The balance of the comedy and the horror is the best there’s ever been.”

Audiences are likely to agree that Morgan has also got that balance pretty much spot on when Double Date is released in the UK by Pinpoint on October 27, And the experience has certainly whetted his appetite for genre filmmaking, which he plans to do more of in the future.

“What happens when I’m writing is that I get bored,” he says. “Two people will be talking for a few pages and I’ll be like ‘Nobody’s died! Nobody’s head’s been blown off! Nothing’s exploded!’ I’ve got a really bad attention span, I just need something to happen. So I think that’s where my love of action and horror stuff comes from.”