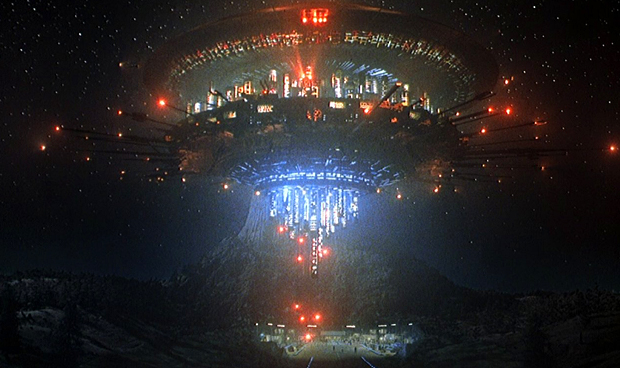 Steven Spielberg's Close Encounters Of The Third Kind turns 40 this year. And it's heading back to cinemas…

Close Encounters Of The Third Kind arrived on the scene as an existential alien encounter enlightenment for its characters and – especially during the buildup to its November 1977 release – a new marketing showcase for blockbuster movies, with a release built upon cryptic teases. Appropriately, with the film’s 40th anniversary approaching, a teaser trailer for its re-release proves to be as cryptic as the buildup to its original release.

Called “This Means Something,” referencing the famous scene in which Richard Dreyfuss’s Roy Neary turns his mashed potatoes into an impromptu rendition of his portentous alien-inspired vision of Wyoming’s Devils Tower, the Close Encounters Of The Third Kind 40th teaser trailer poses familiar questions about the unexplained mysterious findings of air traffic control, cutting to radar footage with sporadic scenes from the 1977 film, building to the iconic five-note alien-communicating tune.

The clip also references a very non-1977 concept of a URL, specifically for WeAreStillNotAlone.com, where you can sign up to receive updates on the re-release.

Arriving in a time period that – mere months earlier – saw Star Wars change the way the film industry thinks about the greater galaxy, Close Encounters Of The Third Kind took viewers away from the fantasy of ‘a long time ago in a galaxy far, far away’, to look up at the very sky above them, wondering for real if they are not alone.

Close Encounters Of The Third Kind will return to cinemas in September, in a 4K restoration.