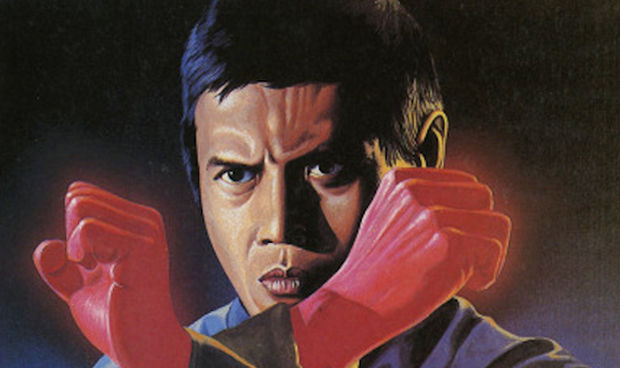 Asian martial arts are now deeply embedded in western pop culture, but this wasn’t always the case. In fact, it wasn’t really until the early 1970s that they made the transition into the mainstream, thanks in no small part to the release of a film called King Boxer. Of course, nothing occurs in a vacuum. By the late 1960s, martial arts were already being taught more widely in the west. Bruce Lee was making waves with his role in The Green Hornet (although his martial arts films, while huge in Hong Kong, were yet to break the US market). James Bond had a ninja encounter in 1967’s You Only Live Twice. Kung Fu, the seminal ABC series starring David Carradine, hit TVs across America in 1972. The west was primed and ready for Asian action and King Boxer brought the ruckus.

Under the title Five Fingers Of Death, it was the first Hong Kong martial arts film to receive widespread distribution in the US, although its content may not seem unique. It was one of many martial arts films that the Shaw Brothers made in 1972 and they’d been producing similar output for years already. Chang Cheh’s The One-Armed Swordsman (1967) was perhaps the major game-changer in terms of content, steering the Shaws away from traditional wuxia towards more explicitly violent films. By 1972, they’d finessed the formula and were banging out extraordinarily high quality films. That year alone gave us Sacred Knives Of Vengeance, Boxer From Shantung, The Water Margin and Kung Fu Killers. So what was so special about King Boxer? To some extent, Warner Brothers were testing the waters for the release of their own Enter The Dragon later in 1973 by distributing King Boxer in the US. With its lurid retitling and marketing campaign (“SEE one incredible onslaught after another! PALE before the forbidden ritual of the Iron Palm!”), the thrill-seeking grindhouse crowd was guaranteed but the film broke out in a major way, hitting #1 at the US box office and attracting an audience way outside the usual demographic.

To try and understand the reasons retrospectively is a tricky task, but I think most roads lead to the conclusion that it’s just a damn-near perfect, no-nonsense distillation of all the ingredients that make a great martial arts film. Maybe it’s not the best film that the Shaws made during their golden years but it is probably my personal favourite.

Lo Lieh plays Chao Chih-Hao, a moderately skilled kung fu student who lives a happy life under the tutelage of his master. He’s in love with the master’s daughter Ying-Ying (Wang Ping) and everything is tranquil. The future looks bright and simple. However, when some thugs attack the village and the master finds himself too old to fight back, he insists Chao must learn greater martial arts skills and sends him off to the school of famous master Suen Hsin-Pei (Fang Mian). To incentivise Chao, he says that if he learns enough to win the local martial arts tournament, he can have Ying-Ying’s hand in marriage.

The film follows Chao’s adventures and combines several of the classic martial arts narratives into one. There’s the tournament plot. There’s also the student-teacher training plot. There’s the fish out of water plot, as Chao adjusts to life outside his sheltered upbringing. There’s a rival schools plot (a la Fist Of Fury) when Master Suen’s school is targeted by the evil Meng Tung-Shan’s (Tien Feng) Pak Sing school. Eventually, it becomes a ‘crippled master’ story (in the vein of successful Wang Yu movies like One-Armed Swordsman) when Chao’s hands are broken and he must find a new way to fight. It sounds like a lot to take in but it still manages to feel impressively streamlined and economical. Unlike many films of its type that focus on a single protagonist, King Boxer thrives on a rich ensemble of characters, most of whom feel strong and well-developed enough to be heroes in their own right. Wong-Gam Fung’s opera singer Yen, whose unrequited love for Chao leads to tragedy, provides the romantic melodrama common to the genre, yet provides one the deepest emotional arcs of the film. Likewise, Chen Lang (Kim Ki-Ju), the nomadic fallen hero who joins with Meng’s troupe of villains, has a more fleshed-out narrative than is usual for a character with so little screen time. As with many Shaw productions, there’s a Shakespearian influence in the structuring of the plot. When King Boxer reaches its final act the resolution is dramatic and powerful.

This provides a backbone for what the crowd came for: the fighting. Admittedly, director Chang-Chang Ho keeps the action focused on what looks good on film rather than any elaborate displays of actual martial arts but this stylish, high-energy approach works in the film’s favour. The use of hidden trampolines, as characters leap into the sky to deliver crushing blows, is maybe a little excessive, but it’s worth it when said blows land in gushing geysers of Technicolour gore. In one climactic scene, a character gets his eyes ripped out by a man he’s previously blinded. It’s brutal, but it’s shot so beautifully and suspensefully that it almost feels like a scene from a giallo. The production design especially shines in this scene, as does the lush wide angle photography – which was tragically wasted on the original VHS pan-and-scan release. It’s one of several moments where the action becomes so Grand Guignol, it almost strays into horror territory and that feeling is accentuated by the magical realism elements of the plot. In the movie’s most iconic scenes, after Chao has mastered the Iron Palm technique, his hands glow a supernatural red and he’s able to deliver the infamous five finger death punches. As someone who originally saw this on video, I’ve been astonished how gorgeous it all looks restored and remastered.

Still, even with so much competing for the viewer’s attention, leading man Lo Lieh holds it all together. His performance as Chao here is one of his best and he’s always been my personal favourite golden age kung fu film actor. He’s so good here, in one of the very few traditionally heroic roles he ever played, that it seems strange he was so often cast as a villain. His journey from neophyte to champion is a familiar one but Lieh imbues the character with so much pain, pathos and – ultimately – defiance that his triumph is a cathartic experience. He looks like such a badass too; his iconic robes, glowing hands and stonefaced stare combining for a look that burned itself indelibly into my brain the moment I first saw the VHS sleeve. So while it may seem like a disparate hodge-podge of tropes on paper, King Boxer actually makes itself a definitive time capsule of 70s kung fu by successfully mashing everything into one perfect story. It’s been 45 years since it was made and it remains as popular among genre fans as it’s ever been. Its success meant that literally hundreds of Chinese, Taiwanese and Korean grindhouse films in its wake tried to imitate its formula. 80s kids will recognise the glowing hands from Berry Gordy’s affectionate kung fu tribute The Last Dragon. The dialogue has been sampled incessantly by the Wu-Tang Clan. In Kill Bill, Quentin Tarantino stole the blistering siren effect that appears whenever Chao uses the Iron Palm (not to mention stealing the ‘five point palm of death’ itself). Edgar Wright claims it as a key influence on Scott Pilgrim Vs The World. The original comic book version of Iron Fist was inspired by King Boxer’s legacy (which, though a far cry from it in tone, connects King Boxer to 2017’s Defenders). Brett Ratner’s name has been attached to a remake of it since 2016.

As the Shaw Brothers films find their way via streaming services into the eyes of a whole new generation, you’ll always find King Boxer at the front of the range. Its rightful reputation as a must-see martial arts classic endures.

And if you’ve not seen it? What are you waiting for? It’s available now on iTunes and many more services. Head to shawbrothersuniverse.com and get started.