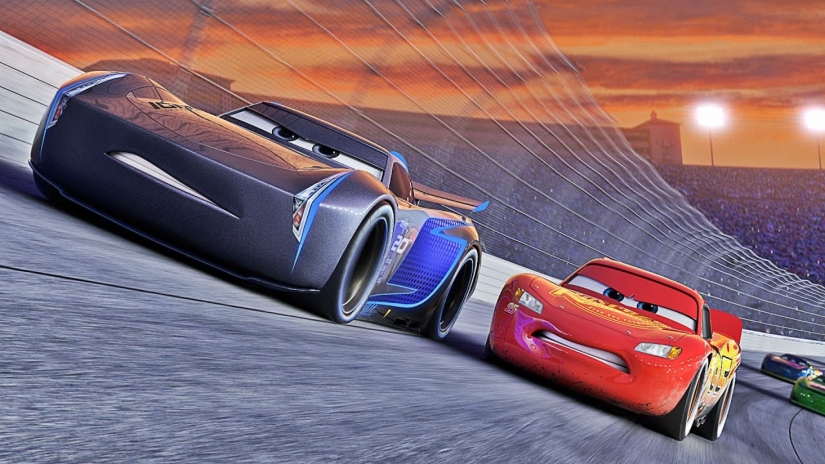 By not hugely popular demand, Pixar makes a third Cars film. It turns out to be an improvement on the last one…

Pixar’s least-vital series of films now brings us what, on the surface, is something of a trilogy closer. It’s also a course correction of sorts. Cars 3 heads back to the safer ground of the original Cars film, rather than exploring the kind of global espionage feature that the really not very good Cars 2 opted to venture towards. You’d hardly accuse the new film of taking much in the way of a risk, but it does at least offer a more satisfying end result.

This time, Lightning McQueen – voiced once again by Owen Wilson – is coming to the end of his career. He’s still racing, but when more experimental, cutting edge racers start overtaking – primarily Jackson Storm, the sort-of foe of the film – he’s left questioning whether his days are numbered. Or, more to the point, those around him around. A corporate takeover at his team owners, Rust-Eze, brings this into sharp focus, as the new team owner, a two-dimensional President Business by the name of Sterling (voiced by the mighty Nathan Fillion), decides that he wants McQueen off the track, and instead to use his name to sell tie-in products. With no sense of irony whatsoever, McQueen utters the killer line “I never really thought of myself as a brand”. The best part of $10bn in toy sales, dwarfing the box office for these films, would disagree.

It’s a perfectly fun, harmless film, though, and a little better focused, albeit less ambitious than its predecessor. In fact, it follows a similar path to the first Cars in its structure, sharing the same soggy middle. Feedback has been listened to, though. Relegated to the garage for much of the movie this time is Mater, the Jar Jar Binks of the Cars Movie Universe. Furthermore, it’s sweet and good hearted-enough to get away with its fairly by the numbers morals.

The one element of the film, though, that makes it feel like a Pixar production is the visuals. Cars films have always delighted people who have to sell hi-res tellies for a living, and Cars 3 is no exception to that. It looks, bluntly, stunning, managing to capture that this is still an animated world, whilst presenting us with fast-paced, exciting races that feel like they’re ripped straight off your sports channel of choice.

Pretty much every other element of the film could have come from any of the other competing studios in the current animation arms race. There’s no particularly compelling character, for instance, and in Jackson Storm, the film has a villain who’s got absolutely nothing under the bonnet. I remain unconvinced about the character designs, too. Too often the eyes just seem to be floating around on a sheet of plain paper. It’s frustrating, too, that in following a back to basics story, Cars 3 doesn’t have fun with that. There was a Rocky IV tribute just waiting to happen here.

But the Cars films have always been far more about spectacle over storytelling, and that’s the same again. They’re not short in the scheme of things either, and this one too nudges a little too close to two hours for much of its younger target audience.

It’s all a bit frustrating really. I commend new director Brian Dee for making something that’s perfectly entertaining, and quite superb to just look at. But I do find myself frustrated by Pixar deploying its very considerable talents on another film that’s core job seems to be to keep the merchandise sales topped up.

Cars 3 is in UK cinemas from today.