Wynonna Earp season 2 episode 8 review: No Future In The Past 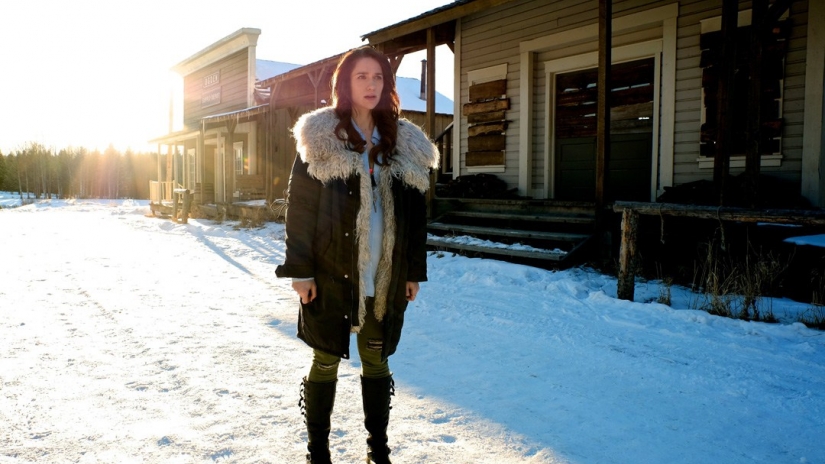 As Wynonna struggles to come to terms with her potential future as a mother (adoption was floated as a possibility by Wynonna’s doctor in tonight’s episode), Juan Carlos sends Wynonna on a vision quest back in time to the start of the Earp curse. Wynonna might not meet Wyatt while there, but she does get to know what Doc was like back in the day and, most interestingly, the origins of Bobo.

It was nice to see Bobo again after a season two thus far without the colourful, complex character. Michael Eklund did a hell of a job crafting a different, yet familiar persona for Bobo — or should we say Robert? We can recognise the origins of Bobo in this loyal, yet jealous man.

Robert loved Wyatt Earp as a friend, even going so far as telling the lawman to shoot through him to kill Clootie, Constance’s husband. It was Clootie who placed the curse on the Earp family. Unbeknownst to Robert when he made the brave declaration, he would be the first killed by Peacemaker cursed to a cycle of eternal undead life.

In the end, Wyatt goes to save Doc rather than Robert, leaving Bobo to die alone. Or he would be alone if not for Wynonna, who Robert can see as he lies dying. He calls her his angel and asks her name, promising that, when he comes back, he will never hurt her. She tells him she is called Waverly, ensuring that Bobo will never hurt Wynonna’s little sister. It not only explains a lot about season one and Bobo’s protective nature when it comes to Waverly, who he calls his angel, but also a flashback that sees Bobo rescuing a little Waverly from drowning in an Earp lake that Willa led her out onto in an effort to get rid of her little sister.

When Waverly recounts the story to Wynonna, she tells her sister that it was Wynonna herself who saved her from drowning that day, which is technically true. It was Wynonna who told Robert his angel’s name is Waverly, and it was Bobo who saved Waverly that day, but how does Waverly make that connection? Or is Waverly lying to Wynonna in that moment because she doesn’t want Wynonna to know about her connection with Bobo, who I’m still not convinced isn’t Waverly’s birth father.

Speaking of which, Waverly gets the results of her DNA test back, only for Nicole to attempt to hide them from Waverly. When Waverly finds out, she gets understandably angry with Nicole about trying to take that choice away from her, to ‘protect’ her by trying to control her.

It’s not only a familiar argument between these two — and between Waverly and a lot of the people in her life — but also ties in with Juan Carlos’ choice envy. When he gives Wynonna a chance to go back and see the beginning of the Earp curse, he is finally making a choice, he is finally interfering after decades of not being allowed to interfere.

If the simplest definition of a leader is the decision-maker, then Wynonna is The Decision-Maker. It’s a burden in its own right, but it also comes with great power. And for a woman to get to be that unabashed decision-maker is still, unfortunately, novel — both on TV and in real life. Wynonna has the power and space to make her own decisions.

In that context, it’s not hard to understand why Waverly is so upset Nicole tried to take that power from her, and why Wynonna is so upset that the decision of whether or not she wants to have a baby has been taken from her by the universe. It’s not that Wynonna doesn’t necessarily want to be a mother; it’s that she wants to have control over her own body. She wants to be the one who gets to make decisions about her own life.

That same narrowing of decisions was imposed upon Doc, too. When we see him in the past, he is a cockier, less thoughtful version of the man we know and love today. A century or so at the bottom of a well will do that to a man. It was Constance who put him there, cursed with protecting the third seal, her wedding ring that also grants Doc eternal life for as long as he wears it.

When Doc is first put down that well, he is given a choice by Robert: send up the ring and Robert will bring him up or stay at the bottom of the well. In the moment, Doc hesitates, unable to trust a voice he doesn’t know. And Robert leaves him there, alone, partially out of the jealousy he has for the man Wyatt Earp seems to love best. This puts Bobo and Doc’s interactions in season one in an entirely new light.

It will also, presumably, put their interactions in season two in a new light. At the end of the episode, Bobo pops back up into life, a consequence of Wynonna being dead for a short period of time. Will Wynonna tell Doc what she saw all of those years ago? Will the trip to the past affect how Wynonna treats Bobo? And might we get some answers about Waverly’s heritage from Bobo?

This was a big episode for Dolls who stands as Wynonna’s protector as she goes on her vision quest, protecting her from the clutches of the witches in black, who continue to work to break the seal that keeps Clootie, their husband, locked away. Dolls drags himself to Wynonna’s side, even after he has been whammied by the witches, and manages to barricade the witches outside of the church. When they set fire to the church, it is Dolls who drags Wynonna’s lifeless body from the building. (Though, notably, it is Robert who rings the bell to wake her up, from the past.)

Once safely back at the Earp house and in Wynonna’s bed, the two cuddle up, seemingly closer than ever. Wynonna might not be in a place, emotionally, right now to start a romantic relationship, but she sure does have two great choices in Dolls and Doc, who both love and support her in generous, empathetic ways.

What was present-day Doc up to this episode? Convincing lover Rosita to make nice with the Earp sisters — not because it would make his life easier, but because he wants her to have strong allies if something should happen to him. (Eek! Does he know his ring is the last seal?) Plus, the Earp sisters make for great friends.

Rosita takes it all into stride, suggesting to Waverly and Nicole that they should throw a surprise baby shower for Wynonna, which is actually incredibly sweet, even if I’m not sure if Wynonna would have actually been into it. (Maybe the bashing the baby pinata part?) Rosita might not have a chance to win Wynonna over, but she does seem to get Waverly’s approval, with the help of Nicole, who mentions to Waverly how cliquey and intimidating Team Earp can be.

This subplot was a sweet, much needed development of Rosita’s character and her connection to Team Earp. I’d still like to learn more about what her deal is, but, for now, it’s nice to see her character trying to impress the Earp sisters. Anyone who thinks the Earps are cool is cool with me.

Read Kayti’s review of the previous episode, Everybody Knows, here.