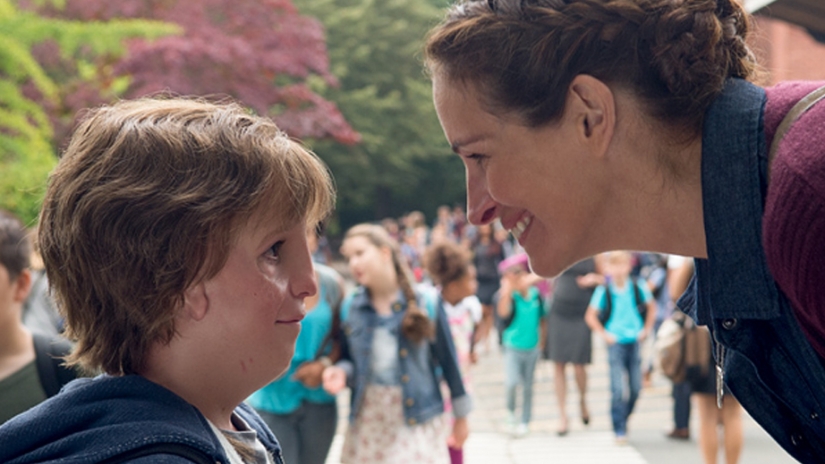 It’s a very special book is Wonder. Published in 2012, and written by R J Palacio, it tells the story of a young boy called Auggie, who battles through life with a severe facial disfigurement. Palacio’s story, and in turn the narrative of this film adaptation, centres on Auggie’s first year at school. Having been home schooled until fifth grade – that’s roughly year six in UK language – his parents, played by Julia Roberts and Owen Wilson, decide that it’s time to for him to go to school and mix with other children. For Auggie, used to hiding his face behind an astronaut helmet, it’s a jump as big as stepping on the moon.

What’s particularly special about the book is how it structures the story, opting to tell not just Auggie’s story, but the story of those around him in overlapping chunks. As such, the novel has sections for several characters specifically, and the screenplay – credited to director Stephen Chbosky, as well as Steve Conrad and Jack Thorne – pretty much follows that structure. Thus, we see the different perspectives on Auggie’s condition, from the bullying that he endures and how he feels about it first and foremost. The paradoxical mix of cruelty and joy Auggie finds at school is often unflinchingly put across. It’s matter of fact, never dwelling, but really makes its points.

Then the film switches to his older sister, Viola – Via – and the story particularly deepens. Because Via has feelings that are barely talked about. How does she, the older sister, feel about how the world revolves around her brother? How does she manage her guilt for even thinking that in the first place? And how does she get any kind of quality time with her parents, who clearly adore her? And what about Auggie’s friend, Jack Will? How did he feel when his headteacher – Mandy Patinkin – asked him to help the new kid out? The film doesn’t have the space to explore all of this as much as the book did, but it chooses its threads particularly well.

As such, it’s mainly the twin human stories – that of Auggie and Via – that the film particularly homes in on, and to superb effect. Chbosky, whose previous film was the quietly impressive The Perks Of Being A Wallflower – entrusts the heart of his movie to the terrific Jacob Tremblay (under heavy prosthetics) and Izabela Vidovic as Via is quite brilliant too. I bought their characters, as I did Roberts and Wilson. As Isabel and Nate, they’re parents in a tremendously difficult situation, achingly wanting the best for their children, without the story plunging into Hallmark Movie Of The Week territory. Crucially too, the film is aimed at a family audience, and genuinely feels that accessible.

Even though the film streamlines parts of the book, though, it still leaves itself with a rush to the finish, to get in under the two hour running time that befits a live action family movie. As a consequence, the last third does get a bit breathless, and the finale – as good as it is – is cut pretty close to the bare bones. Arguably, the film doesn’t quite have quite as sharp an edge as the book, although there’s still a tremendous amount here that resonates. These are small criticisms, though, and comfortably dwarfed by the scale of the achievement around them.

It’s tough to find a pure live action family movie in a modern multiplex, with animated films dominating that space. That Wonder therefore exists in itself is something of a miracle. But that the film has managed to capture the heart, the emotion, the warmth and the humanity of a very, very special book is a sizeable achievement.

It’s some piece of work, and a film that’s rightly going to be special to an awful lot of people. Me included. Wonder indeed.

Wonder is in UK cinemas from December 1st.