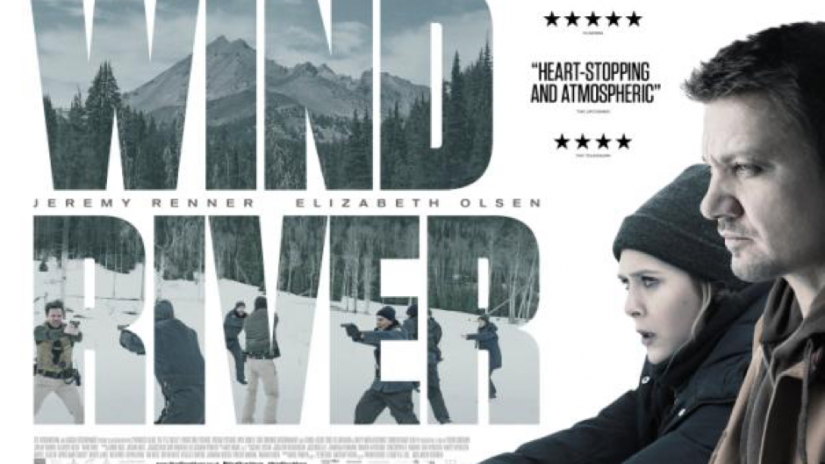 Jeremy Renner and Elizabeth Olsen star in a new thriller from the writer of Sicario and Hell Or High Water. Our review of Wind River…

In the three films we’ve seen from him so far, Taylor Sheridan has managed to give the classic western a contemporary twist each time. In Sicario, brilliantly directed by Denis Villeneuve, we saw how the never-ending War on Drugs has created a violent, lawless frontier on the Texas-Mexico border. Hell Or High Water, directed – brilliantly again – by David Mackenzie – set a story of outlaws and landowners against the backdrop of the global recession.

Wind River goes one step further: it’s a murder mystery, a thriller about male violence, a drama about the marginalisation of Native Americans and, again, a western. Jeremy Renner stars as Cory Lambert, a tracker who patrols the vast, snowy expanses of the Wind River reservation in Wyoming; a seasoned marksman with a tragic past, Lambert’s every inch the archetypal cowboy.

More used to hunting the wolves that circle hungrily around the reservation’s livestock, Lambert winds up hunting a very different kind of predator when the body of a young woman’s found, face down in five inches of snow. An inexperienced FBI agent, Jane Banner (Elizabeth Olsen), is despatched to investigate, and she soon partners up with Lambert to help guide her around the desolate landscape.

As well as writing, Sheridan makes his debut as director here, and it’s an assured piece of filmmaking, even if it doesn’t have the stylistic verve of Sicario or Hell Or High Water. A director like Denis Villeneuve might have made more of the biting cold and growing sense of dread, but Sheridan does succeed in highlighting the sense of dislocation of a small community spread out across a sprawling stretch of land.

There’s also enthralling, sometimes gut-wrenching detail in Sheridan’s writing: Lambert’s knowledge of tracks; the descriptions of what the biting cold can do to human lungs; a particularly bleak moment where Banner learns that, thanks to a legal technicality, she’ll have to crack the murder case on her own. It’s through these details that Sheridan establishes the reservation as a world within a world, where Native Americans have been pushed into a bleak hinterland where there are few opportunities and little connection to the wider country outside. This is embodied most effectively in Gil Birmingham’s performance as the murdered girl’s grieving father; he only gets a handful of scenes, but just as he did in Hell Or High Water, where he rode alongside Jeff Bridges, he makes the most of a small yet pivotal role.

If there’s a problem with Wind River, it’s that Sheridan appears to be so fascinated by Lambert that the other characters get pushed to the side – something of an irony, given that the movie’s about a group of people who’ve been shoved to the societal fringes. As great as Renner is – and this is perhaps his best performance to date – Lambert tends to dominate a story that might have been better with a more ensemble approach: more of Banner as the agent out of her depth, and more about the Native American characters and how they deal with the fallout from the murder.

Despite this niggle, Wind River remains a gripping and superbly-acted thriller, with its whisper-quiet opening giving way to an increasingly tense and unsettling second half. Between this, Sicario and Hell Or High Water, Taylor Sheridan’s firmly established himself as one of America’s most exciting filmmakers.

Wind River is out now in UK cinemas.