Why the best one-off characters belong to Asterix 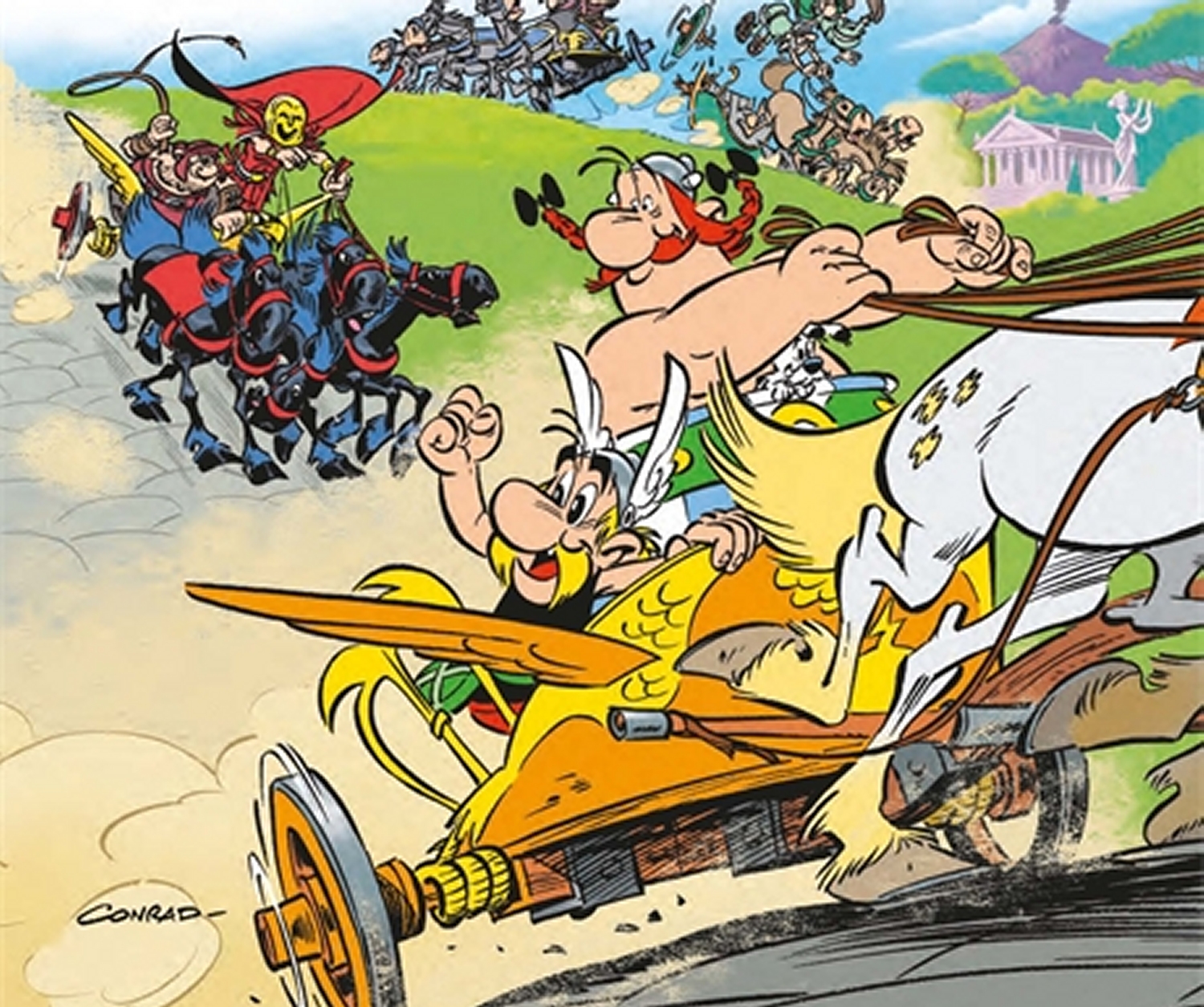 As Asterix And The Chariot Race goes on sale, we take a look at the series' wonderful one-off characters…

If you’re a fan of the Asterix books – and the latest, Asterix And The Chariot Race is available now – and somebody asks you why, you might find yourself talking about the gleeful, tongue-in-cheek sense of humour, or the iconic colourful illustrations. A big part of its ongoing success must belong to the main characters who live in that nameless indomitable Gaulish village – for me, it’s Obelix in particular. I’ve always loved Obelix, who can eat an entire roast boar in a second and carry a menhir on one finger, yet has a deeply sensitive side and falls in love far too easily. I also really look forward to those adventures where the pirates appear, led by Redbeard, and inevitably get shipwrecked after a few sight gags and a bit of creative swearing.

But even the most enjoyable elements of any series can get stale if there aren’t fresh challenges for them to face and new people for them to meet, and I think the many characters who only appear once in any Asterix title are the reason why the books have continual appeal. They add new paths of humour or drama, and every one of them has some unique characteristic that keeps these minor characters from blending together.

That’s not to say that the nature of the plots that introduce such one-off characters are always original – you could roughly sort a lot of these appearances into categories such as ‘a stranger to the village’ or ‘an ambitious Roman’ or ‘a relative of an established character’ without doing them a disservice. Still, no matter how they fit into the action, they bring a sense of delight with them – delight at a new name, a fresh illustration, and another twist on the familiar business of Asterix and Obelix trouncing the Romans.

Here’s a look at just a few of the one-off characters from the hundreds that appear throughout the books. If you’ve got favourites of your own, why not let us know in the Comments section? If nothing else, it’ll be a list of some of the most entertaining names ever given to comic book characters, such as…

The very first book in the series, Asterix the Gaul doesn’t have all its elements in place, but there are already many recognisable things even if the drawing style isn’t quite so familiar sometimes. The inhabitants of the village, for instance, already have their sense of humour and are keen to wind up the Romans that surround them.

There’s a great entry in the ‘ambitious Roman’ playbook to kick off Asterix’s adventures in the form of Centurion Crismus Bonus. He is introduced standing on a tiger skin laid over a boulder, pontificating to his underlings, and finishes up grovelling, trying to explain to Caesar himself why he has a magically growing enormous beard.

I should also mention the lovely way that poor Caligula Minus, the Roman soldier who is chosen by Crismus Bonus to be an undercover spy in this story, is drawn – he has a little pink tongue that continually sticks out and is the perfect representation of his uselessness. I always feel more than a little bit sorry for him.

Prolix (Asterix and the Soothsayer)

Although Asterix and the Soothsayer was the nineteenth adventure published, it was the first one I read. And Prolix has long stuck in my memory: he’s the soothsayer in question, turning up in a storm to ask for shelter at the indomitable Gaulish village, and then telling fortunes for those who will listen. He predicts a fight – and guess what? A fight breaks out. Some would say that’s not such an astounding prediction. Others believe in him, or simply like what they are being told, but Asterix sees right through him; his presence disrupts old friendships, and threatens to tear the village apart.

Prolix has what might be the most dramatic first entrance of any Asterix character; lightning strikes, and his shadow falls through the doorway of the hut where the villagers are sheltering from the violent storm. Illuminated in candlelight, he reveals his job, and the villagers gasp. It’s an unusually spooky moment for an adventure that is surprisingly serious at heart about the nature of gullibility, and self-importance.

Botanix and his family (Asterix in Belgium)

Asterix visits many countries and there’s always a good-natured poking of fun at some national characteristics along the way. The one that sticks with me, though, is the way Goscinny and Uderzo delineate between caricature and reality in a few beautifully low-key pages during Asterix in Belgium. (This was the last Asterix adventure written by Goscinny; he died while it was being produced.)

In the middle of the book, Asterix and Obelix are trying to get into Caesar’s camp to arrange a truce and decide they need a white flag to raise. They come across a small Belgian settlement, and a quiet family who willingly take in the strangers, feed them, and give them a white lace square to use as a flag. Botanix, his wife Cauliflowa, and their son Manikin who needs to pee all the time (well, this is Belgium) are just so clearly and lovingly drawn that you have to smile. Not all the characters have to be ridiculous or grotesque to be memorable.

There are so many fantastic incidental characters in this book that it’s really difficult to pick just one, but Insalubrius gets the mention because he’s a perfect example of a man whose life is going along very nicely until he meets the Gauls, and then it doesn’t take long for his entire world to fall to pieces.

It’s his job to train Asterix and Obelix as gladiators to appear in the Circus Maximus (they are attempting to rescue Cacofonix the bard, who has been kidnapped and is about to be fed to the lions), but his training methods really don’t work for them, leading to a wonderful sequence that gleefully sends up Spartacus (which was released a few years before the publication of this, the fourth Asterix book). In one of the strongest of all the books, the training of the Gauls remains my favourite moment.

Justforkix (Asterix and the Normans)

Belonging to the ‘relative of a villager’ category, Justforkix is the nephew of village Chieftain Vitalstatistix, sent to stay in order to be toughened up. He arrives in a sports chariot, plays loud rock music, and generally refuses to take part in village activities, which bemuses Asterix and Obelix. But things really get interesting when he gets kidnapped by a boatload of Normans who want to learn the meaning of fear, and heard that everyone was afraid of the Gauls from a certain indomitable village…

There’s some really lovely generation gap stuff in Asterix and the Normans, but the thing I like best about Justforkix is the way he develops as a character, dealing with his own fear about the situation he finds himself in to create his own definition of bravery. Mainly that involves shouting and being annoyed, but I like that – the villagers accept him on his own terms, and prove that not everything is about beating up Romans, sometimes. Very occasionally.

Influenza and her family (Asterix and Caesar’s Gift)

Here’s a wonderful mirror image of life in the village that acutely reflects on the flaws of some long-established characters for a great comic result.

Influenza, a teenage girl, ends up living in the Gaulish village along with her father and mother, Orthopaedix and Angina, after they are ‘given’ the village through a proclamation of Caesar’s. Once they realise the village was not Caesar’s to bestow, they stay anyway, and set up an inn, and Influenza is very unhappy to find herself far way from her old life in Rome. She stands a bit outside the main action, which is a tale of how Orthopaedix ends up challenging Vitalstatistix for the role of Chieftain. The two men and their wives jostle for superiority, and the game of politics comes to the village.

There’s a further strand to this adventure that makes it really rewarding, and that is how Influenza is playing her own political game: to get home, to find her own happiness, all without realising what she’s doing to Asterix and Obelix. I love this extra element in Caesar’s Gift, even if it does all get thrown away and resolved with a punch-up and a banquet.

But then, that’s another element of the Asterix books that I would never want to change. The one-off characters come and go, and keep the adventures and the jokes fresh, but some things in Ancient Gaul really do have to stay the same, and ending with roast boar, an open fire, and dancing around the table (with Cacofonix the bard bound and gagged to the nearest tree in case he might decide to sing) is one of them.