Why are babies allowed into 18-certificate parent and baby screenings? 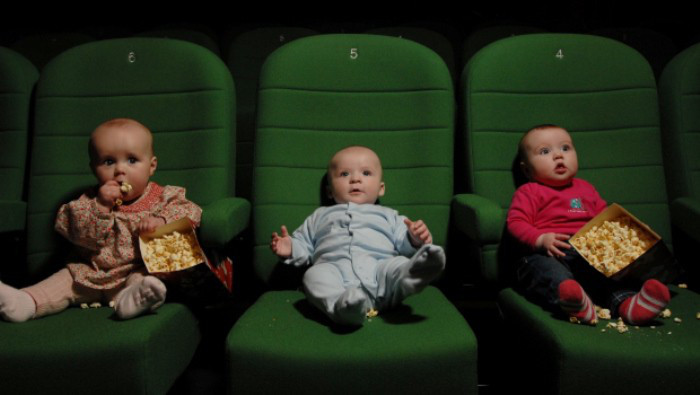 Parent and baby screenings of mother!? Aren't babies held to the same BBFC certificates as the rest of us? Well, sort of…

The first film that my youngest child watched in a cinema was Olympus Has Fallen. He knew next to nothing about it, given that he was less than a year old and fast asleep. But I’ll always be conscious of the fact that the first time he went to the movies, he snuck in underage. Because technically, he wasn’t supposed to be there.

It sounds a small thing, but Olympus Has Fallen was given a 15 certificate in the UK, yet clearly, my then tiny child was 14 years and counting shy of that. The cinema in question could have got into serious trouble for admitting someone underage, that it technically did. It is actually an offence, with a punishment.

In fact, go back to 2014, and Sam Ross of Cambridge was ejected from a screening of Bad Neighbours because she had her sleeping baby with her. The baby wasn’t making noise, but the cinema nonetheless applied the letter of the regulations it operates under. As infuriating as it sounds, it was technically in the right.

However, cinemas around the country do try and combat such incidents by holding what are deemed ‘mother and baby’ screenings of new releases (although more are calling them ‘parent and baby’ now). These are screenings that tend to be scheduled on a weekday morning, where it’s clear that newborn-ish babies are welcomed, and the audience accepts there may be some disruption as a consequence of that.

Hilariously or scarily, depending on where you fall, in recent weeks there have been mother and baby screenings of Darren Aronofosky’s mother! as part of such programmes. I’ve no intention of spoiling the subject matter of that particular film, but instead, I’m going to settle on the 18 certificate that the film rightly holds.

The question: is it against the law to take a baby to an 18-certificate film, even if it’s been deemed a ‘mother and baby’ showing?

The answer: no, but not for the reason you may think. Because the BBFC itself offers no staggered system that relaxes ratings for a mother and baby showing, and as such, a cinema isn’t automatically allowed to offer one (in fact it would be breaking the law still to admit babies to such a film). Instead, such screenings are at the discretion of local councils.

The reason for this is that it’s actually local councils who grant a cinema permission to show its films, under the terms of the Licensing Act. Any variance on that, then, is a council matter. The cinema concerned basically has to ask permission to allow babies in.

Furthermore, it’s not a case of a blanket permission being given for every film, either. Rather, the cinema concerned and the local council have to agree what films can be used for parent and baby screenings. Which means that at some point, somebody had an actual conversation about screening mother!, and allowing babies in. But it’s also why it’s perfectly legal, in this very specific exception, for somebody underage to get into an 18 certificate film…