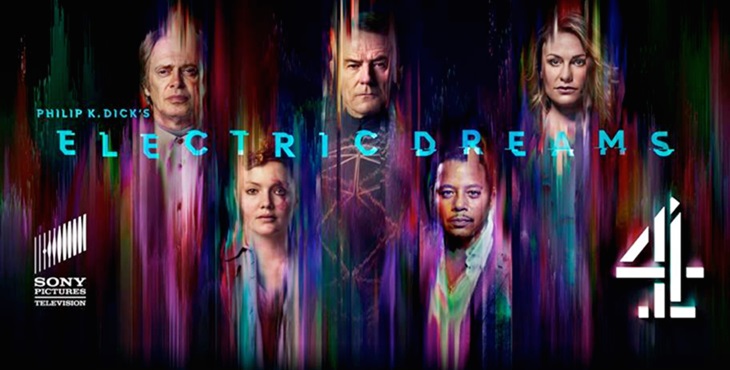 We went on the set of Philip K. Dick’s Electric Dreams, saw some cool visuals, and chatted to Bryan Cranston…

“They used to make razors here”, laments Bryan Cranston, between takes on the set of Philip K. Dick’s Electric Dreams. He’s in one of the cavernous corridors of London’s Gillette Building, which has recently been converted into a film studio. It’s a rather fitting locale for the show, which is revisiting ten sci-fi short stories from the 1950s and finding their modern day relevance. The author of these stories was Philip K. Dick, who also provided the inspiration for Blade Runner and Minority Report.

“Robots make razors now. Not people”, Cranston adds, tapping in somewhat to the technological terrors of this upcoming Amazon/Channel 4 anthology series. Cranston has executive produced this show for the last couple of years, and he’s here today shooting scenes as an actor.

Den Of Geek is visiting the set of Electric Dreams just three days before filming wraps on the series. Cranston’s episode, Human Is, is the last one on the slate. But there’s still evidence, dotted around Gillette’s former factory, of other stories that were shot here: mood boards on the walls display everything from spaceships to sofas, via haircuts and dome-shaped homes. One particular section seems to point to a post-apocalyptic grungy vibe, with stills from Mad Max: Fury Road stuck up alongside Enchantress from Suicide Squad. Human Is, however, has something of a vintage vibe to its sci-fi design. On a tour of the set, we see a tin-can-like rocket ship, a silver cylinder with red flourishes, which has the call sign S2K9 emblazoned on the side. It seems very much like a 1950s idea of what a spaceship would look like

A surplus of bungee chords in the outdoor area surrounding this rocket seems to suggest that an acrobatic action scene has taken place in its vicinity. There’s no such sequence in the short story, but it’s no surprise that Amazon and Channel 4 are adding new material to bulk up the brisk yarn that Dick dreamed up.

Next, we see the interior of a government base set, replete with colourful flags and hanging spheres that look like disco balls. It’s really quite striking, boasting a beautiful simplicity. The set is devoid of actors at present, but producer Dan Winch explains that this is the headquarters of the IAA, whose employees wear Star Trek-esque outfits, with badges that match up to the aforementioned flags. Again, there’s no such detail in the short story, but screenwriter Jessica Mecklenburg has expanded the world nicely. All of it seems to fit with the original vision.

We also glimpse the inside of a home, which has a shedload of sliding compartments and no shortage of spheres. The perfectly circular kitchen sink looks cool, but not very user friendly.

“There’s quite a significant moment that happens in the kitchen”, says Winch, referring back to Philip K. Dick’s version of the Human Is narrative, “and [graphic designer] Lisa [Williams] has designed a kitchen appliance that is fitting to that original story.” Winch gestures to a massive stove, which, as you might’ve guessed, is circular.

The original short story saw a man named Lester returning from a space mission with a much sunnier disposition than he left with, much to the surprise of his put-upon wife, Jill. The bare bones of that concept remain in this TV adaptation, but a lot of fresh flesh has been added. Some of the changes seem minor – Lester is now named Silas, and Jill is Vera – but some of them are much bigger. “It is still about a woman’s plight”, Cranston explains, before going on to explain how Jill/Vera’s role has been upgraded. “We’ve adjusted her position in it, to give her more of a say. In the original short story, she was without occupation, if I remember correctly. And, in this story, we have given her a very high position [in the IAA].” Cranston seems pleased with the changes; having overseen twelve drafts of the script, he proudly states that this finished version “speaks to a more current condition” than Philip K. Dick’s original material.

Essie Davis of The Babadook plays Vera, opposite Cranston’s Silas. And although we don’t get a chance to speak to her on set, much is said about her input. Winch speaks of her “magical chemistry” with Cranston, as well as praising her dedication to the role. Davis apparently sacrificed a weekend to get to grips with a rotating sci-fi treadmill, which she can now use “brilliantly”. Not our idea of fun, that.

We didn’t get to see her at work, but it sounds like Davis’ emotional journey as Vera will be the heart of the piece. And we did get to see that spinning treadmill thing – if the gyms of the future are filled with technology that complicated, you can definitely count us out.

With the trailers choosing to keep details scarce, we’ll have to wait and watch the episode to find out how Vera’s story plays out. Not much of Cranston’s performance has been shown yet, either. And exactly how Liam Cunningham (Davos from Game Of Thrones) fits into proceedings also remains to be seen. But one thing’s for sure: with this amount of talent, working from the masterful sci-fi writings of Philip K. Dick, Electric Dreams promises to be a real treat. Stay tuned to Den Of Geek for more coverage…

Philip K Dick’s Electric Dreams starts on Channel 4 in the UK on Sunday the 17th of September at 9pm.