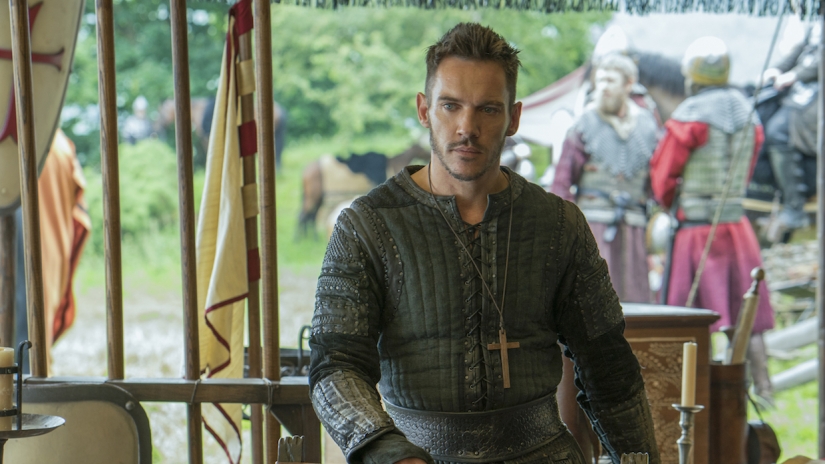 The contenders for power are out in force in Vikings' 2-part season 5 premiere. Spoilers ahead in our review…

“The King is dead. Long Live the King,” Jonathan Rhys Meyers’ Bishop Heahmund intones in this week’s double-episode premiere of season 5 of Vikings.

Last season saw the wiping of the slate in terms of royalty (if not leadership) in the deaths of long-time rivals King Ragnar Lothbrok of Kattegat and King Ecbert of Wessex (oh yeah, and annoying King Aelle), potentially leaving the History channel’s best show rudderless, with many fans opening bemoaning their inability to see a version of Vikings without Travis Fimmel’s excellent Lothbrok. Rather than ignore this fear, History has wisely made this season about precisely that: in the absence of Ragnar, who will rise?

The contenders are called out in the marketing for this season. There’s the supposed heir (by more Western standards of monarchy, which do not truly apply) in Bjorn, first-born of the sons of Ragnar. Of course, he’s rarely shown any interest in being a king. He has learned leadership, certainly, from his father, but it is his father’s desire for new places and experiences that Alexander Ludwig’s Bjorn has inherited from his father. Once the brothers Lothbrok have led the Great Heathen Army to success in avenging the death of their father by decimating the courts of Ecbert’s Wessex and Aelle’s Northumbria, Bjorn considers his debt to family paid and sets sail back to the Mediterrenean, where he says his fate lies.

He takes with him Halfdan, brother of the Harald Finehair, whose oft-declared goal of becoming “King of Norway” takes him back to Kattegat, where he promises he will deliver the news of the victories that Bjorn and his brothers have had to Ragnar’s first wife Lagertha, whom they left sitting on their father’s throne. Of course, Harald does not expect to find her there, as he had commissioned Egil, the bastard son of a nameless Jarl, to attack the village and wrest it from Lagertha. If Egil’s failure is a surprise to Peter Franzén’s Harald, there is no evidence of it when he finds Lagertha still in power. Nor does he allow her humiliating imprisonment of him to last long: his men free him, kidnap Astrid, and sail off—but not before it’s made clear that this is only a temporary retreat.

But Lagertha’s more than earned the throne that she occupies and while she is the only contender of her generation in the running, age isn’t slowing her down—not that Katheryn Winnick has aged a day in her portrayal of the decades-long career of Lagertha. Harald may have tried, this week, to tempt her into marriage with him to secure her place (more than hinting that a female ruler is especially vulnerable), but Lagertha has not only built up the physical defenses of her hometown, she has created a fighting force that seems a match for any we have seen on the show thus far. And she is as clever, in her way, as her ex-husband Ragnar—you don’t get very far as a woman, she agrees with Torvi, by relying solely on your fighting arm. While others reassure her that her lover Astrid would never betray her, she’s seen enough to know that you have to be prepared for treachery even among those most close to you.

And she’s made powerful enemies, none more so than the now battle-hardened sons of Ragnar by her successor as wife (Aslaug). Ubbe, Hvitserk, and most definitely Ivar are not likely to forgive her from taking Kattegat from their mother before killing her. But for now, at least, they are still in England, where Ivar has convinced his older brothers to fight on, rather than settle down in East Anglia, the prize Bjorn believes he wrested from King Ecbert before his death. If eldest brother Bjorn got his father’s wanderlust, Ivar (Alex Høgh Andersen) seems to have inherited everything we tend to think of as most Viking from Ragnar: brutality and a desire to maraud his way into Valhalla. He convinces (rather than bullies, for the first time) his brothers that a retreat to York is in their best interest. There, with some guidance from their father via Ubbe, they take the fortified town, butcher its inhabitants, and strengthen their position. With access to both land and sea, it’s a smart move and goes a long way to beginning to change our mind about Ivar. While Ragnar’s mannerisms foolishly allowed some to believe he was not quite right in the head, it’s been made crystal clear that his youngest son is as truly twisted in mind as he is in body. And yet, for all that, he has twice now led the Vikings to success by thinking tactically rather than emotionally. It makes for a dangerous combination.

Perhaps most perilous for his brother Ubbe, played by Jordan Patrick Smith. We get to really see Ubbe in battle for the first time, as he scales the walls of York sans ladder and fights his way to the gate, opening it to the Viking forces led by Ivar and Hvitserk. It’s a bit of a surprise because Ubbe’s gift from his father has so obviously been his patience, empathy, and level-headedness, so his physical prowess has gotten less attention. But it is those emotional and mental gifts which ought to make him the best candidate for king; there’s little doubt that he would be a wise and successful ruler—were he not Viking. He lacks the heavy penchant for violence that his bloodthirsty and ambitious baby brother has, and it’s clear that his dominance over him is slipping away quickly. If he has not also inherited some of Ragnar’s cleverness, he may quickly go the way of Sigurd. But for now, Ubbe, Ivar, and brother Hvitserk remain co-leaders of the Great Heathen Army.

Facing them are the combined forces of newly crowned King Aethelwulf (Moe Dunford) and Bishop Heahmund). After the Machiavellian attitudes of Ecbert’s view on his apparent religion, the two provide us more traditional views of medieval Christian faith. Aethelwulf’s is the more comfortable, as he ascribes the turn of fortune he and Wessex have suffered to the removal of God’s grace in retribution for their sins. Although Judith takes his statement on the subject to be an indictment of her past behavior (being her father-in-law’s lover), Aethelwulf is quick to make clear that he believes there is a more general fallen state to blame for their woes, and he seeks the usual remedies: prayer and repentence. He may wear his father’s crown, but he is not his father’s son; there is a humility and kindness to him that Ecbert lacked. And yet, as Bishop Heahmund points out, Aethelwulf is also unlike his father in that he made a name for himself as a warrior. He is as comfortable on the battlefield as in church.

Something that may also be said for Heahmund. Jonathan Rhys Meyers is the biggest name actor to join the show, and there was some fear that it might alter the ensemble-approach—pulling too much focus from the web of characters and plots that have made Vikings so successful. But for now, he seems to fit in fine playing a churchman who seems foreign to modern sensibilities. However, carrying the sword and crucifix was not limited to the crusaders: the Knights Templar were only one of many groups of religious warriors whose prowess and church-approved power could be called into service (or exercised for their own benefit). Nor does his sex life run afoul of what we know of the period. It was not until the Second Lateran Council of 1139 (Vikings is set in the 8th and 9th century) that the Church finally officially forbade marriage among the clergy. Even after that, it was not uncommon for bishops and even popes to have active sex lives. Roderigo Borgia (Pope Alexander VI) had many children both before and after his elevation to the papacy. Heahmund’s religious fervor and sword arm seem poised to make trouble for the Lothbrok brothers.

All in all, the series seems off to a good start, with the tensions clearly outlined for newer viewers and some good character development for those of us who have been here from the first. Ivar’s tearful plea to Floki (who, after the death of his beloved Helga, places himself and his boat in the hands of the gods and discovers Iceland) is the first time we have really seen Andersen’s character exhibit any gentler emotion, and this promises more. Historically, we know who won out (Google it yourself, I’m not spoiling any more of the medieval period for you), but despite Vikings being on the History channel, that’s no guarantee of where things will land on the show. That said, Vikings may not be the same series without Ragnar, but thus far, it looks like it too will rise from the ashes of his pyre.