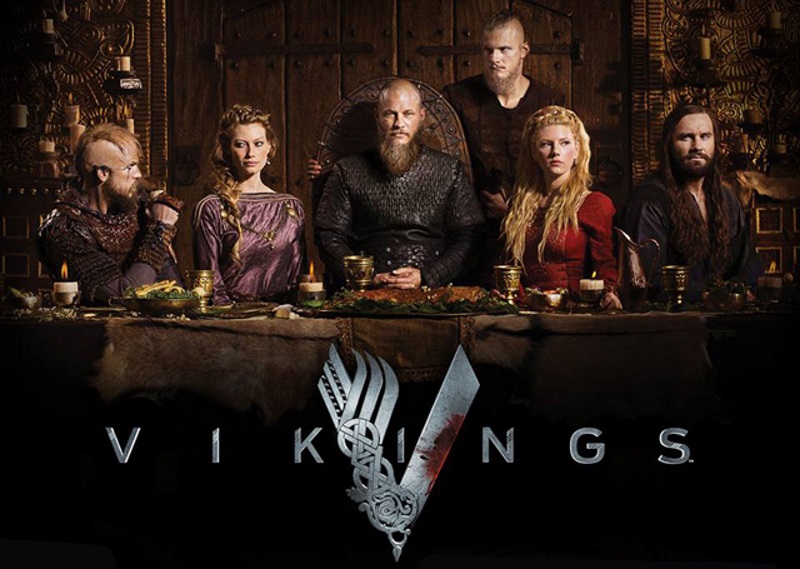 With season 5 arriving this week, here's a handy reminder of what happened in Vikings season 4. Spoilers ahead…

Warning: contains spoilers (as you might expect!) for Vikings season 4

One of the standards of medieval storytelling is the concept of the Wheel of Fortune. Unlike modern uses of the trope, where every new endeavour is subject to the unpredictable whims of Fortune (a turn of the wheel), in the Middle Ages, the Wheel represented the cycle of fate on a larger scale. It was a reminder that no matter what a character’s current status, the wheel kept inexorably turning, dragging down the highest and raising the lowest.

And so, if seasons one through three of Vikings were largely the story of the rise of Ragnar Lothbrok from farmer to king of Kattegat and leader of the first wave of Viking expansion to the hit western Europe, season four is the story of his decline and fall, partly due to his previous sins coming back to haunt him.

As season three ends, Ragnar, though wounded critically, has captured Paris, leaving his envious brother Rollo behind with a small force to keep an eye on things. Frankia’s Emperor Charles sees an opportunity, as does Rollo, and the Viking’s marriage to princess Gisla and his slaughtering of his brother’s remaining forces in France seals their alliance.

Arriving back in Kattegat, Ragnar’s mind and body are suffering, leaving Bjorn and Aslaug to run things. When Bjorn outs Floki’s murder of his father’s friend, Christian monk Aethelstan, he forces Ragnar to punish the shipmaster, further driving the wedge between Ragnar and his closest ally from his early successes. Bjorn leaves Kattegat to find himself and Floki’s punishment leads to the death of his daughter with Helga. When Aslaug approaches the shipwright to school her crippled son Ivar in the ways of the Norse gods (whom she feels Ragnar has abandoned), Floki accepts and begins to turn Ivar into as bloodthirsty and devoted a Viking as one can possibly imagine. Always fascinated by what lies beyond Kattegat, Ragnar becomes infatuated with Aslaug’s new slave Yidu, who introduces him to what appears to be opium, and as he falls into the arms of addictions, he tells her what he has told no one else: that the colony left behind in Wessex was almost immediately slaughtered under King Ecbert’s orders.

Back in Wessex, Queen Kwenthrith has lost Mercia in a rebellion and Ecbert dispatches Aethelwulf to help her and her son Magnus (assumed to be Ragnar’s son). Although she barely escapes with her life, she remains undaunted in her desire to regain her throne and seduces Aethelwulf in order to gain an ally. Aethelwulf’s wife Judith is hardly in a position to argue (nor seems inclined to) since she has become Ecbert’s lover. Although Ecbert agrees to fight for Mercia, Kwenthrith’s hopes are crushed when he returns having slaughtered her enemies only after they have passed her title on to him. She is now a prisoner in Ecbert’s gilded cage. When she tries to escape, taking Ecbert hostage, Judith kills both the fallen queen and her unborn child (by Judith’s husband Aethelwulf).

Lagertha also deals with treachery, though far more successfully. She returns to Hedeby with Kalf, the man who usurped her Jarldom, only to find misogynistic Einar on the disputed throne. Lagertha publicly emasculates the pretender, and Kalf offers to share her own Jarldom with her. She pays Erlendur back as well by encouraging his wife Torvi – a battered spouse – to leave Hedeby with Bjorn. And then eliminates her last rival when, on their wedding day, she kills Kalf, whose child she is carrying. Unfortunately, her wish for another child is dashed when she then miscarries. When Harald Finehair, a King who hopes to unite all of Norway under his control, arrives in Kattegat with his brother Halfdan, Ragnar is finally shaken from his opium stupor enough to realize that his own power is in jeopardy and he mounts another assault against Paris. Harald and Halfdan see this as an opportunity to take the measure of the legendary Lothbrok and come along, as does Lagertha, Floki, Bjorn, and his brother Ubbe and Hvitserk.

Rollo has been busy in Paris. Having thrown his lot in with the Franks, he learns their language and customs, and soon Emperor Charles trusts his Viking son-in-law to lead the effort against the raid they know is only a matter of time. When it comes, Rollo’s fortifications and strategies allow the Franks to decimate both the Lagertha’s forces on land and Ragnar’s on the river, leaving them to return to their camp which has also been decimated. The Vikings no longer have faith in Ragnar’s abilities to lead. Their fears are shown to be well founded when, in the final clash, Rollo’s fleet largely destroys that of the Vikings. He wounds his brother in hand to hand combat, and the Vikings limp home as Rollo is given a triumphant welcome back in Paris.

Ragnar returns to Kattegat and almost immediately disappears. In his absence, news arrives as to the secret of the fate of the Wessex colony. When Lothbrok returns, many years later, all of his sons are fully grown, living under the rule of Aslaug, and looking for some sense of self. Ragnar challenges them to kill him and assume his throne, but instead, Ubbe embraces his father and the family is briefly reunited. Ragnar wishes to return to Wessex and seek vengeance for the slaughter of the colony but has great difficulty in recruiting allies who see him as having lost the favor of the gods. Floki is busy building ships for Bjorn’s expedition to the Mediterranean with Hvitserk and Harald, and Lagertha refuses. Ragnar manages to bribe a few old warriors to go with him, but when their ships are caught in rough seas, most are killed. Ivar and his father kill the rest before going to Ecbert’s court.

Once under the power of Ecbert, Ragnar secures a promise that Ivar will be provided safe passage home in return for Lothbrok surrendering to his rival. He knows that Ecbert must have him killed, but Ecbert arranges to have him handed over to King Aelle for execution so that the blame (and vengeance) will fall on Northumbria, not Wessex. Aelle has the Viking brutally tortured and mocked before dropping him in a pit of snakes to his death, with Ecbert as a disguised witness to his fate.

Bjorn’s expedition meets with an initial setback when Bjorn insists on meeting with Rollo, who has his nephew, Floki, Harald, and Halfdan thrown in the dungeon. However, this is short-lived as Rollo’s Vikings roots have him wanting to join them. He releases them and grants them safe passage on the understanding that they will take him with them. They reach the Mediterranean and raid the town of Algeciras where Floki is deeply moved by the devotion of the Muslims and spares a mosque in prayer, Helga adopts a local child whose mother was killed before her eyes, and Harald and Halfdan plot the downfall of the Lothbrok family. With her ex-husband and son gone, Lagertha and her lover Astrid move on Kattegat, taking Ubbe and Sigurd – who had promised to protect the city – prisoner and killing Aslaug. Lagertha has a vision of Ragnar visiting her a final time in death while Bjorn and Hvitserk also receive supernatural word of the news. Lagertha and her ruling force of women lead Kattegat in a building of new fortifications around Ragnar’s former capital.

When Ivar returns safely to a transformed Kattegat, both he and Ubbe make attempts to kill Lagertha, with an also-returned Bjorn stepping in and telling them they’ll have to go through him. Instead, all of the brothers Lothbrok band together with a plan to lead a great army of Vikings against Wessex in vengeance for their father’s death. With a chariot fashioned by Floki, Ivar contests Bjorn for leadership of the army, but Bjorn insists that he will be first among equals with his brothers on this venture – over the protests of Torvi who warns him not to go at all.

While Rollo remained behind in Paris, though offering land in Normandy to any Viking who should wish it, Harald and Halfdan have also returned to Kattegat and are planning its fall. They enlist Egil, son of an unknown Earl, and once the fleet sails for England, Egil attacks. His attack fails, however, being foreseen by Lagertha and expertly handled by her warriors, and Egil meets his end by being slow-roasted on a spit. Before he dies, he reveals who is really behind the attack. Landing in Northumbria, the Viking army make quick and brutal work of King Aelle’s army and the brothers perform the blood eagle on Aelle. When word reaches Wessex, Ecbert, transformed into a humbler and repentant man after the death of Ragnar, softens towards Aethelwulf and asks him to lead Wessex against the great army. Aethelwulf agrees and leaves for Mercia where the Viking army lays in wait for him. There, they use a strategy proposed by Ivar which turns the geography against the prince’s forces, and Aethelwulf is forced into retreat. He flees to his father’s court to warn them, and his father agrees that they must leave – except for Ecbert himself. He steps off the throne in favor of his son, and then sends the family off together under Aethelwulf’s protection while he awaits the arrival of the Vikings.

When the Lothbrok brothers find the court empty, they are disappointed. A force is sent out to find him, and during the confusion, the Muslim girl adopted by Helga turns on her, killing her forcibly adoptive mother and then herself. Floki finds Helga and buries her, devastated. Ecbert is eventually found. At first, the brothers argue over how they will kill their father’s frenemy, but Bjorn makes a side deal with Ecbert, accepting a deed for East Anglia in return for allowing Ecbert to end his own life. He uses a knife to slash his wrists in his Roman bathhouse.

Denied their prize, the brothers continue to argue, with Bjorn wanting to return to the Mediterranean and Ivar wanting to continue to punish the court and country of Wessex for their father’s dishonor and death. During the argument, Ivar kills Sigurd with a throwing axe, forever dividing the brothers.

The season ends with the introduction of the warrior Bishop Heahmund, played by Jonathan Rhys Meyers, who will play a significant role this season as the brothers battle the world and each other to be the true successor to Ragnar – by saving his Jarldom of Kattegat or destroying it utterly.