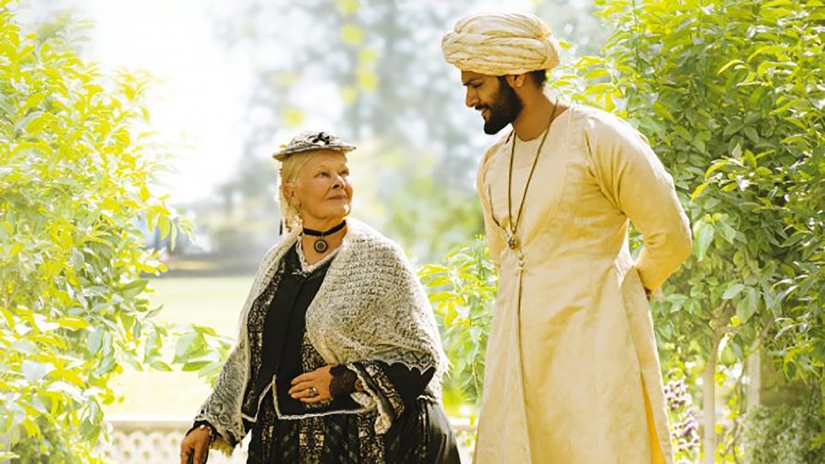 Appreciating that every film is a risk to varying degrees, sometimes, you come across one that just seems like a safe bet on paper. Here’s one now. Victoria & Abdul sees Dame Judi Dench reprising the role of Queen Victoria, albeit this time near the end of the monarch’s life. Billy Elliot and War Horse screenwriter Lee Hall has penned the script, based on the book by Shrabani Basu. Philomena and The Queen director Stephen Frears takes the helm. And the story itself is a recently-ish discovered one, about an unlikely friendship that Queen Victoria struck up with a young Indian clerk by the name of Abdul Karim.

What could possibly go wrong with that?

As it happens, very little. From very early on in Victoria And Abdul, it’s clear that firstly, you’re in very safe hands, and secondly, this is genuinely a fascinating story.

The early stages focus more on Abdul, played winningly by relative newcomer – to non-Bollywood audiences at least – Ali Fazal, and his colleague, Adeel Akhtar’s Mohammed. It’s very funny pairing  too, with Akhtar in particular stealing moments, which makes the gradual relegation of his character a little disappointing.

Soon, though, the pair are dispatched to England – and this is a film where very long expanses of time pass in seconds, to keep the story moving – to present a gift to Queen Victoria. But just because Dame Judi Dench has played the role of Victoria before, in the terrific Mrs Brown, that doesn’t mean she’s in any way content to go through the motions.

Quite the opposite. Her brilliantly cantankerous take on Victoria is realised in some excellent, lavish early scenes where you realise just how much effort has been put into scaling the production up. We thus have a state banquet, where nobody can eat until the very tired Queen starts to do so, and everyone has their plate whipped away the minute she’s finished. Frears knows this is good stuff, and doesn’t fuss it at all. Furthermore, there’s no sudden lurch, as the story naturally, and gradually, funnels down to the growing interest of the Queen in Abdul.

Based on a true story that only came to light in the last 20 years, there’s clearly been some debate as to how broad to play things. But the film, in the end, doesn’t shy away from the darker edges of the story, even though there’s clear temptation to go more comedic. Abdul’s family back in India, for instance, and his absence from their lives, are firmly not ignored. Nor is the growing unhappiness amongst others in the Royal household – led by Eddie Izzard’s Bertie – at the increasing influence Abdul is having on the Queen.

In Dench’s hands, Victoria is a character who turns in seconds from sweetness and daises to venom and sharpness. She doesn’t need to oversell it, either. A glare from Dame Judi pierces through the screen in a way that no 3D effect can ever do, and there’s an undercurrent of uncertainty as to just where everything is going to head. I guess it’s necessary to write that Dench is just brilliant – just as she was in what was her career-altering first time around with the character in Mrs Brown –  but I’m also aware that most of you will know this without even seeing the film.

I’d guess, though, that Ali Fazal is new to many (outside of Bollywood features and a brief appearance in Fast & Furious 7), and what an introduction. Aided to a degree by Dench’s generosity as a performer, Fazal nonetheless has quite a lot of work to do here, as his character evolves and as problems converge. He instantly, though, seems a very comfortable screen actor, and proves an excellent foil for the Queen. Given that the film centres on their relationship, it’s hard to imagine a more natural fit.

There are some occasional pacing issues with the feature as a whole, and one or two characters – no spoilers – are given less shrift than their arcs perhaps deserve. But this is still a really good piece of work. A film worthy to be mentioned in the same sentence as Mrs Brown, too, and a story that film seems perfectly suited to tell.