Twin Peaks season 3 episode 14 review: We Are Like The Dreamer 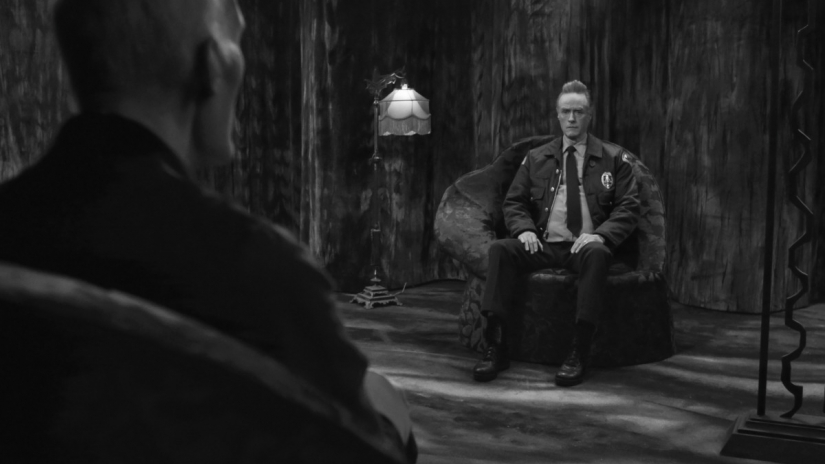 Gripping, weird as hell, and season three's most surreal episode in a while. Spoilers ahead in our review of We Are Like The Dreamer…

This is easily the most surreal episode since Part 8: Gotta Light? Still, though there was lot of insane stuff I can hardly guess at the meaning of, there was also a lot of plot development and scenes of the police and the FBI finding things out and getting stuff done. It’s the sublime version of Twin Peaks I see in my mind’s eye where surrealism and police procedural coexist comfortably alongside one another. (Let’s not forget that even the original series often was not like this. The surreal moments were largely confined to specific episodes.)

Part 14 has two great sequences of spiritual policework. There’s the Twin Peaks Sheriff’s Department heading to the woods and Gordon Cole’s dream. I love how characters in Twin Peaks have simply accepted that dreams and the supernatural are part and parcel to solving cases. Following Major Briggs’ message, Bobby, Hawk, Andy, and Truman all put soil in their pockets, without any hesitation (Truman expresses mild skepticism, but still goes along with it). Tammy and Albert listen unreservedly to Cole’s dream, which he introduces as a complete non-sequitur with one of the best lines of the entire series, “I had another Monica Bellucci dream.” How great is it that Monica Bellucci plays herself in the Twin Peaks world and yet we only know her through a dream?

We also get major plot bombshells in these scenes. Diane’s half-sister is Dougie’s wife, Janey-E Jones, and finally the FBI is looking in the right place for the real Coop (but we know Diane is working with Evil Cooper and that she was waiting for the FBI to ask her about Las Vegas, which leaves a cloud hanging over this otherwise good news). In the Sheriff’s Department, they finally arrested that piece of garbage, Chad! Correct me if I’m missing something here, but did we know they were watching Chad, aside from when Lucy saw him sift through the mail, that is?

Furthermore, we discover that Naido, the blind woman from Part 3 who talks by making pseudo-monkey sounds, is now out in the real world and is apparently very important. Also, Andy gets to visit the White Lodge (or what I am presuming is the White Lodge) to meet with the Giant, now officially called the Fireman, and learns the history of Bob, Laura, and the two Coopers. I always love when we head back into the Lodge(s) and I love that it was sweet, honest, dopey Andy who is bestowed with all this knowledge. However, it is sort of a lame plot device that evidently anyone who gets whisked into the White Lodge can just be fed a recap of the series up to that point. It seems like a cheap way to move the mystery along.

This guy Freddie (who works with James; hey James!) also got brought to the White Lodge once where he received loads of exposition followed by super strength! The theory I’m positing now (which is bound to be proven wrong later) is that the White Lodge is assembling its own group of White Lodge Avengers to combat the Woodsmen and the members are Dougie/Coop, Freddie, Naido, Sarah Palmer, and probably Laura too, somehow.

Speaking of, Sarah Palmer, uh, what the hell? Talk about some patented low-rent Lynch special effects. Also, I found the “Do you really wanna fuck with this?” line kind of corny, but, hey, it was still cool to watch Sarah murder the hell out of a guy with “Truck You” printed on his shirt.

I mentioned my nitpicks, but, in the end, what can I say? A lot of stuff happened (we even met the daughter of the elusive Tina!), it almost all took place in the titular town for a change, and most of it was gripping and weird as hell. More, please!

Read Joe’s review of the previous episode, What Story Is That, Charlie?, here.