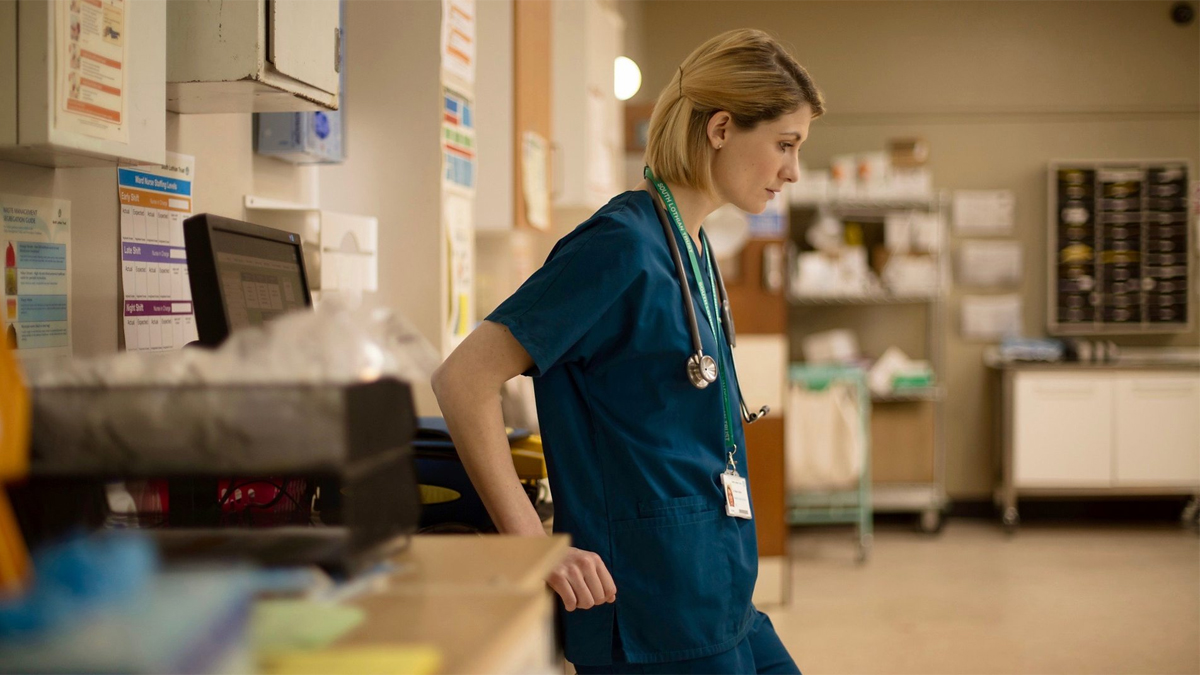 See related
Trust Me episode 1 review
Doctor Who, and the casting of Jodie Whittaker
Bodies: excellent medical drama not for the faint-hearted

I’m not one for irritable reaching after fact and reason when it comes to TV drama. How does so-and-so afford a flat like that on a part-time superhero salary? I don’t much care. How did thingamabob drive all the way up there to launch that nuke without once stopping for petrol? Couldn’t give a fig.

We just want to be told a good story. TV isn’t real life – pointing out its logistical inaccuracies is a fun pub game at best and pedantically humourless at worst. Few of us are truly bothered by how unlikely it is that a serial killer got 4G reception in his underground mountain lair. If we’re gripped by whatever else is going on, we won’t even notice.

It’s bad news for Trust Me then, that I’m finding it hard to quell an inner monologue repeatedly asking niggling questions. How did Cath set up her BACS payments? Haven’t her new colleagues tried to add her on Facebook? Exactly how much babysitting is her landlady doing? And why, when the plausible window of time between starting to fancy someone and Googling them is a maximum of six hours, did it take Andy this long to look up Ali online?

Most of all though, the question I find myself asking is why is she doing all this? Cath’s not unhinged. She’s not a fantasist or in truly desperate straits. She certainly wasn’t faced with no alternative but to steal her friend’s identity. Did she really embark on this whole thing just so she could afford to shop at All Saints and take her daughter out for the occasional pizza rustica at Zizzi?

The problem of Cath’s motivation continues to undermine Trust Me. The efforts made to ensure that we don’t see her as a villain (she’s even more sympathetic now that we learn she lost her mother at eight and has looked after her dad ever since) are what makes her deception difficult to swallow. The initial stakes were too low for her to believably make such a serious transgression.

Though as transgressions go, Cath’s lie still doesn’t feel all that serious. The odd flap aside, she still not making any worse mistakes than a newly qualified doctor might. She’s good with her patients, willing to learn, and unlike colleague Brigitte (who has to be necking Stoli out of that billycan she carries around, right?) she’s sober on the job.

Ignore the plausibility issues and you’re left with a basically sound medical drama rather than a functioning thriller, fronted by a talented actor. Jodie Whittaker has a sort of reactive freshness in her scenes. While other actors seem to be reciting lines, it feels as though she’s thinking of them up on the spot. What tension there is all comes from Whittaker’s face, which broadcasts emotion like the RKO Pictures tower sends out waves.

Episode two saw the net draw in on Cath. Her one big lie forced her to tell lots of smaller lies. She bought a fake passport in a dodgy pub and much less forgivably, she let journalist Sam believe that Karl is a domestic abuser. When the situation called for her to tell a fairly simple lie though (‘my daughter’s ill/I’ve got a migraine, sorry I can’t make it to the medical conference’), the power escaped her. That put her in the path of avoidable danger, and more specifically in the path of the kookily hair-styled junior doctor she upbraided in episode one.

(Incidentally, another question for the inner monologue – between The Replacement’s handsome shots of Glasgow and this, what kind of a deal has the BBC hatched with the Visit Scotland tourist board?)

The conference provided the episode’s best speech, delivered by Sharon Small, as a pissed Brigitte reeled off the deaths she’d caused as a doctor. That, like the episode’s authentic-feeling grisly medical procedures and unsavoury patients, was real and complex and the seat of some proper drama. It was reminiscent of a similar speech in series one of Jed Mercurio’s excellent Bodies, a medical show that didn’t rely on an identity-swap gimmick to say what it had to about the NHS and the lives of its employees.

In episode two’s final minutes, Andy discovered the truth that Dr Ali was in fact, Nurse Cath, which accelerates things in time for the remaining couple of weeks. Presumably Cath’s lie will be exposed, but then what? What will we have learned? Don’t lie? Do, but for the right reasons? Life isn’t fair? I’m not yet convinced Trust Me quite knows itself.