Total Recall’s Richter: a day in the life of cinema’s unluckiest villain 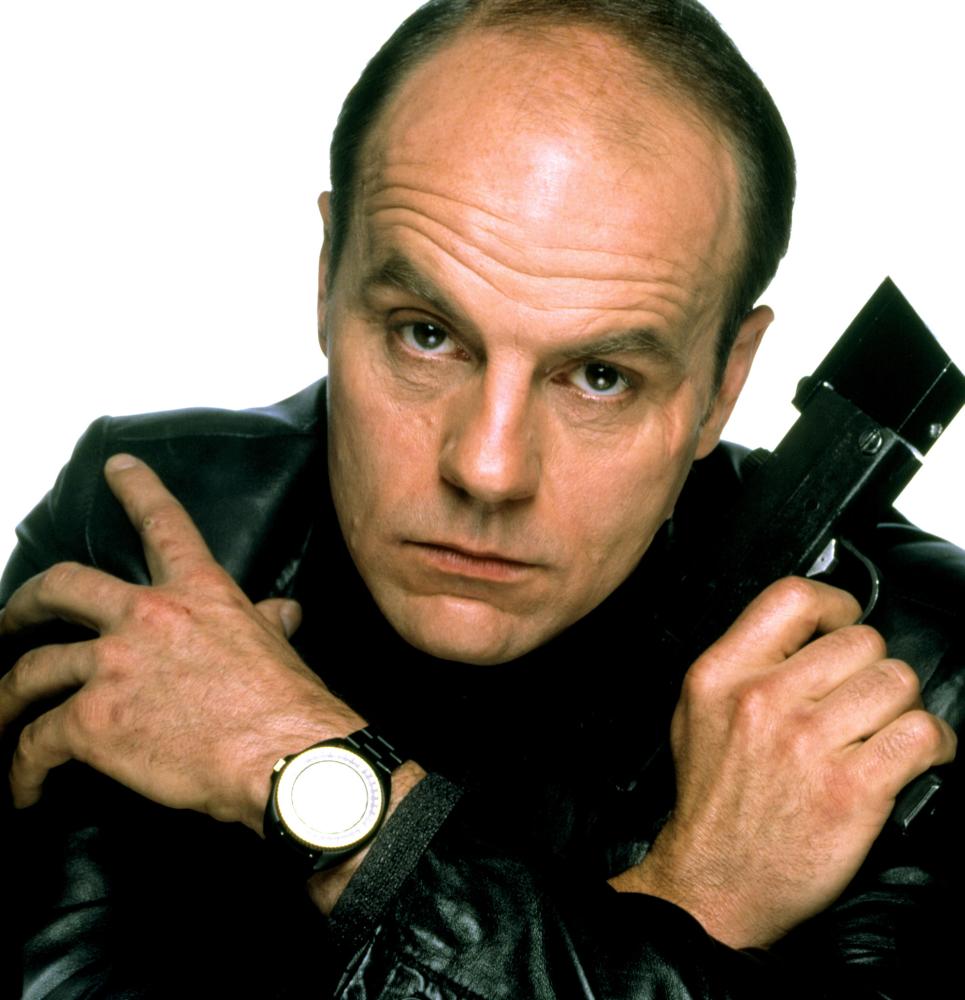 Brilliantly played by Michael Ironside, Richter is Total Recall’s best villain – and also just a guy having the worst day of his life…

There’s a moment in Total Recall – Paul Verhoeven’s flat-out classic 1990 action film – that perfectly sums up the tension between its hero and villain. Beefy everyman Doug Quaid (Arnold Schwarzenegger, on top form) has just ‘discovered’ that his entire life is a sham: his wife isn’t really his wife, and his memories are all false – they were somehow implanted by an unknown agency determined to hide his true identity.

On learning the truth, Quaid finds himself pursued by a group of assassins, led by Richter – played with startling intensity by Michael Ironside. After a blazing gun battle, Quaid escapes the villains’ clutches by ducking into a subway car, and it’s here that we get that wonderful moment: a shot of Richter, standing on the platform, bellowing in unbridled rage as the train rattles away. It’s a brief yet fascinating bit of acting from Ironside: eyes wide, fists balled, nostrils flared. His look of fury leaves us in no doubt that his pursuit of Quaid is more than just another assignment.

The odd dynamic between Richter and Quaid was established in an earlier scene. Having emerged from Rekall – the shonky memory-implant company that uncorked his true identity – Quaid avoids an assassination attempt from someone he thought was a work colleague, and then heads back to his apartment. There, he relates what just happened to the woman he thinks is his wife – the seemingly benign Lori (Sharon Stone). Lori explains that the past eight years of memories are all a sham, and that she was assigned as a spy to keep an eye on Quaid and ensure that the memory erasure took.When Lori stages an assassination attempt of her own, Quaid flees, and we then learn that Lori is, in fact, married to Richter. Richter arrives at the apartment, evidently concerned about the safety of his spouse, and determined to track down and kill Quaid.

This flies in the face of Richter’s orders: his boss is Vilos Cohaagen (Ronny Cox), the de-facto dictator of a colony on Mars, whose idea it was to erase Quaid’s memory and dump him on Earth in the first place. Cohaagen doesn’t want Quaid dead – for reasons that don’t become clear until later – and simply wants Richter to capture Quaid so he can be pacified and re-installed into his sham marriage. Understandably, Richter has never been a fan of having a mountainous guy like Quaid sleeping with his wife, and so he spends much of the movie with his gun cocked, ready to fire.

Amid a plot that’s quite complex in the early going, the tension between Quaid, Lori and Richter helps orient us in Verhoeven’s future world of space travel, off-world colonies, secret agents and memory implantation. It may take a few minutes to really understand what’s happening to Quaid on first viewing, but age-old emotions like jealousy and rage are immediately recognisable. The passionate kiss Richter shares with Lori, and the primal roar from Richter, which essentially closes the first act, tell us all we need to know about the villain’s motivation. In fact, if we flip Total Recall’s plot around, and view the events from Richter’s perspective rather than Quaid’s, we’re essentially watching an ordinary (if somewhat sociopathic) guy suffering through an increasingly disastrous sequence of events. In the story’s villain hierarchy, Richter’s a middle-man: he isn’t quite an underling like his bespectacled side-kick, Helm (Michael Champion), but he isn’t a corporate kingpin like Cohaagen, either. He’s spent an unspecified amount of time sitting on the sidelines while his wife, also a secret agent, pretends to be married to another guy much taller, better-sculpted and less tonsorially challenged than he is. (“I’m sure she hated every minute of it,” Helm tells his boss wrily, when the latter asks about Lori and Quaid’s brief relationship.)

When Quaid goes on the run, Richter’s forced to chase the big oaf around Earth and Mars, while Cohaagen shouts at him from a video screen for letting him get away. To make matters worse, a last-ditch attempt to bring Quaid alive leaves Lori dead. Enraged, Richter engages in a fight to the death with Quaid on a moving elevator – the encounter leaving Richter plummeting to his doom, minus his arms.

None of this is to say that Richter isn’t an out-and-out villain. We see in more than one scene that he has no qualms about killing innocent people who get in his way – in one scene, he shoots an unarmed woman in the back. That Total Recall’s writers – Gary Goldman, Dan O’Bannon and Ronald Shusett – give Richter such compelling and understandable motivations is what makes the movie stand out from so many others of the 80s and 90s. In most action-thriller plots, it’s generally established that a henchman’s following orders; in Total Recall, Richter has his own agenda – killing Quaid rather than taking him in – and an understandable, quite amusing reason for doing so.

Michael Ironside’s primal turn, and the construction of the plot, also do much to give Schwarzenegger a credible opponent. By 1990, we’d already seen the Austrian Oak fight the imposing Vernon Welles in Commando and an eight-foot-tall alien in Predator; finding new villains to stand against him was probably difficult by the end of the 1980s. Richter doesn’t have a gold gym membership like Quaid, but he’s propelled through the movie on a river of volcanic rage; Ironside plays the part with such naked fury that, when the two finally meet for their terminal punch-up in the third act, it’s easy to believe that one of Richter’s punches could inflict damage on Quaid’s chunky torso. If you want to see how vital Richter is to Total Recall’s plot, take a look at director Len Wiseman’s polished yet forgettable 2012 remake. The screenplay, written by Mark Bomback and Kurt Wimmer, essentially fuses Lori and Richter into the same character, so that it’s Lori who pursues Quaid around the film as his would-be assassin. It probably sounded like a good idea on paper: reducing the number of characters streamlines the story, and besides, there should be some dramatic mileage in a story where the hero’s hunted by the woman he once thought of as his wife.

In practice, taking Richter out of the equation was one of the many creative decisions that turned Total Recall from vivacious and blackly funny to studiously formulaic. The Wile Coyote-and-Road Runner interplay between Richter and Quaid was gone; in its place we had Colin Farrell on the run from Kate Beckinsale – a coldly efficient assassin with no real agenda or motivation of her own.

Verhoeven’s Total Recall, by contrast, is wild and untrammelled, and in Richter, the Dutch director of RoboCop and Starship Troopers appears to have found something approaching a kindred spirit. As played by Schwarzenegger, Quaid is a babe in the woods, or Alice in Wonderland: a physically capable yet slightly dopey innocent constantly reacting to all the madness going on around him. Richter’s a force of nature – the guy who runs around making stuff happen while Cohaagen sits behind his desk, counting all the money he’s hoarded up from his mining operations.
Richter’s a ruthless asshole, certainly, but we can’t help admiring his raw, human spirit – and maybe holding a sneaking bit of sympathy for him. In Verhoeven’s previous sci-fi classic, RoboCop, Richer’s closest analogue is surely Clarence Boddicker, the psychopathic hoodlum played by Kurtwood Smith. Like Richter, Boddicker’s the street-level villain to Ronny Cox’s corporate bad guy – the one who fires the guns and really drives the plot. But unlike Richter, there’s the overweening sense that Boddicker’s always having a great time: right up to the point where he’s pointedly brought to justice by Robo, the character positively revels in his own cackling, murderous villainy. For Richter, just about everything sucks: his boss is a dick, his subordinates are useless, his wife’s sharing a bed with the hero.

To cap it all, Verhoeven and his writers throw another possibility into the mix. Right near the beginning of the movie, Quaid goes to Rekall and buys, with his own wages, an “ego trip” experience where the memories of an adventure on Mars will be implanted in his mind. A fast-talking salesman tells him he’ll get the girl and save the day; in all likelihood, everything we see from the moment Quaid wakes up at Rekall is part of this imagined experience.
Now consider this: Lori and Cohaagen both appear in the first act, before Quaid goes to Rekall. Quaid wakes up next to Lori; Cohaagen’s on the TV news. Richter, meanwhile, doesn’t even show up until after Quaid buys his ego trip. This offers the possibility that Richter’s just another part of Quaid’s wild, violent delusion – as non-existent as all the gun battles and daring escapes on Mars.

Whether he’s imaginary or real in the context of Total Recall’s sci-fi rollercoaster ride, Richter is, surely, one of the great 90s screen villains. Quaid is the larger-than-life hero, which makes Richter the everyman. Teeth bared, eyes rolling with frustration, Richter’s just an average Joe suffering through the worst – and last – day of his life.