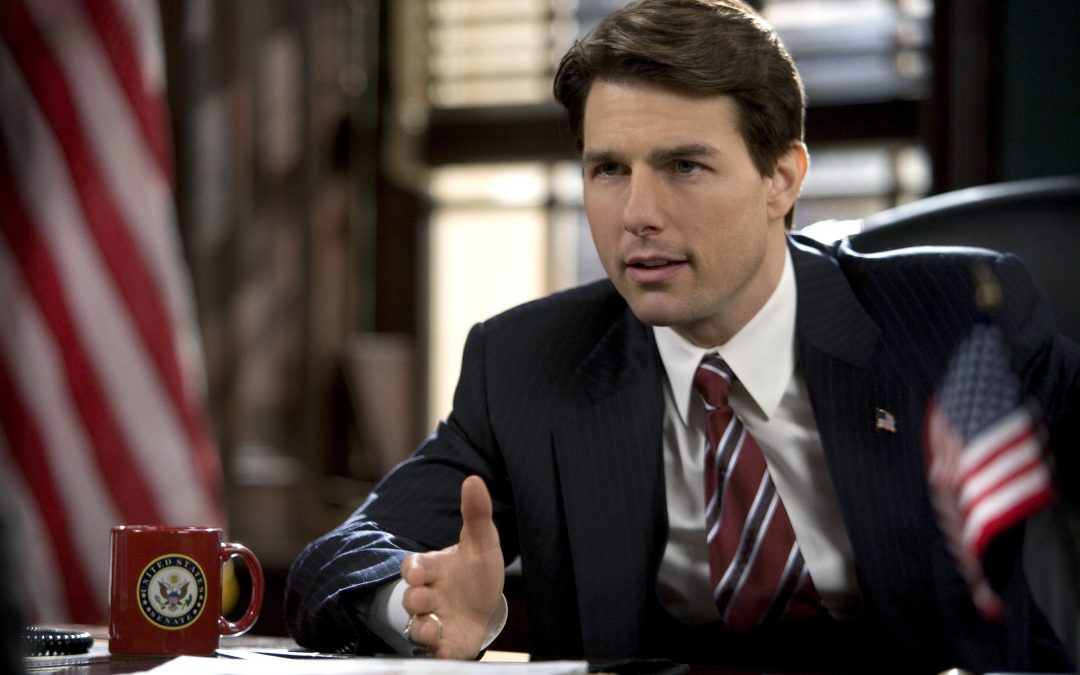 In late 2006, with much fanfare, Tom Cruise was announced as headlining a revived United Artists. But what went wrong?

Lurking in the corners of Netflix UK is a not-very-widely-seen Tom Cruise movie, that a decade ago was all set to herald a new filmmaking dawn. Directed by Robert Redford, and with a cast that includes Redford, Cruise, Meryl Streep and a then-relatively-unknown Andrew Garfield, Lions For Lambs looked on paper to be a heavyweight political drama. Its focus is on three stories: an ambitious politician giving an interview to tough reporter, an army platoon being ordered to go on a top secret mission by said politician, and a professor trying to talk a promising student into turning his life around.

It looked like Oscar-bait. It turned out to be a footnote to the failure to resurrect United Artists.

United Artists was originally founded in 1919 by Charlie Chaplin, Mary Pickford, D W Griffith and Douglas Fairbanks, with the ambition of allowing acting and creative talent to have control over their work, as opposed to being studio-dictated. In the decades that followed, the company had a bumpy life, but not without successes. In the 1950s and 1960s in particular, United Artists scored many successes, winning bags of Oscars too. It also, presciently, picked up the rights to the James Bond novels. Not a bad business move, that.

But the dramatic fall really came at the end of the 1970s, with new owners Transamerica, and the decision to back Michael Cimino’s notoriously expensive bomb, Heaven’s Gate. Heaven’s Gate bled money out of the company, and a merger with MGM followed. MGM, too, would soon face its own financing struggles. Fast forward to 2006, though, and a promising future looked on the horizon. Tom Cruise and his producing partner, Paula Wagner, had been under an exclusive production deal with Paramount Pictures since the early 1990s – leading to the Mission: Impossible movie franchise, amongst other projects – but when that deal came to an end, they looked for other opportunities. This was around the time when Paramount’s then-boss, Sumner Redstone, had made less than complimentary remarks about Cruise’s declining box office draw costing Mission: Impossible III box office green.

A break was inevitable, and an opportunity developed. MGM was looking for what to do with its United Artists label, and negotiations began about an unusual deal. As such, in November 2006, a deal was announced. Paula Wagner and Tom Cruise would take on a minority share in the latest iteration of United Artists. The plan was that Wagner would act as CEO, whilst Cruise would be expected to appear in its films, but wouldn’t be exclusively locked to UA productions (it would have somewhat gone against the originally founding principles of United Artists had he been). Cruise and Wagner would then have autonomy over a slate of up to four movies a year, provided the budgets were on the modest size.

At the time, MGM spokesman Jeff Pryor wouldn’t be drawn on whether Cruise and Wagner had paid for the equity stake, or whether it was in return for having the star power of Cruise involved in UA productions. “I wish Tom and his associates the greatest good fortune on their new venture”, Sumner Redstone said in a statement, whilst hardly battling to keep him on the Paramount lot.

Even from the off, though, response to the new United Artists was mixed. Some questioned whether Cruise had the box office power to make it work still. Others wondered if it was a play by Cruise to show he still had clout in Hollywood. Some, less cynically, suggested he just wanted to make more of the films he wanted to see.

Whichever theory was subscribed to, though, all eyes would inevitably be on the first picture from the new UA. As it happened, a film was already deep into development. Based on a screenplay by Matthew Michael Carnahan, Lions For Lambs already had Robert Redford interested in the movie as his next directorial venture. He hadn’t directed a picture since 2000’s The Legend Of Bagger Vance at that stage, and was interested in a project that went against the Hollywood trend for purely entertainment projects. He signed on the dotted line, and filming began at the end of January 2007 – less than three months after the new UA deal had been announced. It would be the first picture under the umbrella of it.

Redford noted subsequently that it was the tightest schedule he’d ever worked to, with less than a year between the film’s announcement and release. But the bigger problem became how to sell it. MGM in the end was insistent that this was a Robert Redford project, rather than a Tom Cruise film, but one look at the poster showed it was also hardly downplaying Cruise’s relatively modest on-screen involvement.

Beyond that, though, the film’s three stories – whilst independently interesting – didn’t really convincingly gel into one coherent feature film. As such, critics didn’t warm to the movie, and attempts by MGM to half-sell it as a blockbuster film didn’t work either. Costing roughly $35m for the negative, the film grossed $63.2m worldwide. It would only crawl towards profit on its home release, and even though, it’s not a curio that too many seek out.

Still, Cruise had a bigger project for United Artists, and this time he would take a starring role. Back in 2002, screenwriter and director Christopher McQuarrie started putting together a film based on a plot to assassinate Adolf Hitler in 1944 by German soldiers. He’d subsequently shape that into a screenplay for what would become the film Valkyrie. McQuarrie interested director Bryan Singer, who had brushed against the subject matter with his movie Apt Pupil. He agreed to direct, and McQuarrie suggested that the film would be a project the new United Artists would be interested in. He was right.

Paula Wagner liked the pitch immediately, and in March 2007, a deal was struck to finance the film. Cruise was asked to star, and agreed to do so. Filming duly began in July 2007. But in the aftermath of Lions For Lambs’ disappointing box office, the stakes became a lot higher for Valkyrie. At $75m, it was a more expensive film for a start. But this would also be a more telling audit of where Tom Cruise’s box office power actually was at this stage.

The film, though, was soon in the crosshairs of the movie press, with a volley of disparaging stories emerging whilst the film was being made. Not that the constant shifting of release dates helped. Valkyrie was originally set for release in August 2008. Then it moved to June 2008. Then it moved to October 2008. Then it moved to February 2009. Then it moved back to December 2008. At least one of the date changes was to accommodate the filming of an extra sequence, but the others betrayed the leaking confidence MGM had in the film. Once a movie it wanted to target as an Oscar contender, it eventually figured awards wouldn’t be forthcoming, and went to maximise box office instead. Furthermore, it reconfigured its marketing to downplay Tom Cruise’s involvement, and the constant dismissal of the film as Cruise’s ‘eye-patch movie’.

Contrary to some popular opinion, Valkyrie was a decent commercial success, too. The film has problems, certainly, but reviews were okay, and the global box office of $200.3m wasn’t a bad return, given the troubles the production had been through. However, even before the film his cinemas, the new United Artists was crumbling. On August 14th 2008, months before the film was released, it was announced that Paula Wagner had left United Artists, and instead would be developing films as an independent producer. She kept her ownership stake in the movie, but according to a Variety report at the time, she “frequently butted heads with MGM” when actually trying to get films greenlit. MGM itself had undergone a change of studio head in the interim, and its new boss was more interested in developing a slate of pictures himself, rather than pushing resources to United Artists. For MGM’s part, it argued that Wagner “wasn’t developing aggressively enough”.

Wagner had been hampered by the Writers’ Guild of America strike at around the same time, that led to the collapse of what would have been a further UA production, Pinkville. Bruce Willis had signed to star in the movie, that Oliver Stone would have directed. But when script problems sprung up, UA couldn’t hire writers to fix it. The talent moved on. It also had a dance movie by the name of Move, from Camp Rock director Matthew Diamond, near the starting blocks. That, too, fell apart.

The plan at the point of Wagner’s departure was said to be for Cruise to take a greater involvement in the running of the studio. But there’s no sign that ever came to pass. Valkyrie was Cruise’s last project to date with a United Artists logo on it, and he would instead focus on acting projects again, such as Knight & Day, Mission: Impossible – Ghost Protocol (that revived that franchise back at Paramount) and Rock Of Ages.

Instead, United Artists is now a name without the original company and its ethos behind it. Today, the United Artists webpage is a competition to win a trip to the set of the new Stargate TV show, and that’s it. MGM has used the United Artists name on a new television production deal it struck with One Three Media and Lightworkers Media back in 2014. It’s a subsidiary label, and nothing more, for MGM.

Ironically, since his last United Artists picture, Cruise has been involved in six Paramount productions, including the two lined up for release in the next two years. Lions For Lambs, meanwhile, a film once set to be the bold opening of a revived artistic ethos, loiters around the corridors of Netflix…