The Walking Dead season 8 episode 6 review: Time For After 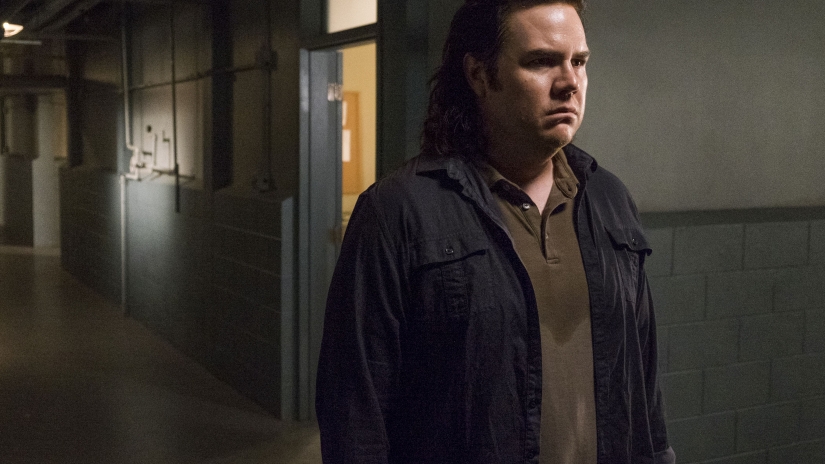 Josh McDermitt brings some much-needed fun to The Walking Dead season 8 as Eugene Porter, the focus of Time For After. Spoilers…

The Walking Dead is a show with a lot of interesting characters who speak in interesting ways. Negan is probably the most obvious one; he spins long sentences and crams in strange, infantile profanity. Rick has lots of long speeches that allow writers to really dig into a specific topic. Jadis is… well, she’s different, but not entirely complicated, you just cut out non-essential words and boil everything down to noun-verb or verb-adjective phrases. But the character that has to be the most fun to write for is Eugene Porter, and he’s the central character in Time For After.

I can only provide conjecture on the process of writing for Eugene, but I imagine it’s something like write the script straight, then embellish the hell out if it with interesting, funny turns of phrase that sound great coming out of Josh McDermitt’s mouth. I can only imagine McDermitt adds to the process himself, considering his background in improv and comedy, but whatever the process is, it works spectacularly and it allows Eugene to be one of the few bright spots in a show typically full of frowning and sweating and blood. Eugene is strong enough to carry an episode, and he has previously in The Walking Dead‘s run, but the character tends to be at his best when he’s put into a situation where he has to go maximum weasel.

Eugene has been on maximum weasel mode since he had his confrontation with Dwight, and it’s increasing with every visit Eugene has with either Negan or Dwight. With Negan, the brief scene between the two is shot in a very clever way. You don’t see Negan so much as you see Negan sitting on a table with the handle and barrel of Lucille in the frame, and Eugene, during the entire conversation, can’t take his eyes off the bat that Negan keeps stroking and tapping. Negan is nothing but agreeable throughout most of the discussion, but the threat is always there, and it’s clear that Eugene is more afraid of Negan than of Dwight, who also confronts Eugene but who scares Eugene less, even when Dwight has a gun pointed at him.

It’s not a huge surprise that Eugene knows who the traitor is, and that Eugene knows that Dwight wouldn’t throw him under the bus to save his own skin. Dwight gives Eugene an out by coming to his assistance during the previous tense meeting of all the Savior chapter heads while Negan was hanging out with Gabriel in the trailer. Even if Eugene hadn’t quite put all the dots together at that moment, it’s enough of a tell that he’s able to put it all together, but it’s nice to see that, in the end, Eugene isn’t quite fully gone. Yes, the script from Matthew Negrete and Corey Reed makes it absolutely clear that Eugene’s out for himself, but he’s not quite willing to sell out an otherwise good person in the process.

That’s one of the more clever character moments for Eugene, and I don’t think it has anything to do with his bedside talk with Gabriel. Eugene is a survivor; he makes that abundantly clear in every discussion with pretty much everyone. But Eugene is smart enough not to burn all the bridges he has crossed on his current path. He might be a coward, but he’s a smart coward, and a resourceful one. He comes up with an idea to clear out the zombies, which is good. He has the opportunity to throw Dwight under the bus and refuses to do so, which is also good. Either way, Eugene has a good spot no matter how Rick’s plan plays out. That’s a true survivor move.

Josh McDermitt is one of the strongest performers on The Walking Dead when he’s given something to do. Eugene could very easily be a one-note character, a sort-of running joke, but in McDermitt’s hands, Eugene is fully rounded. He’s funny, but there’s definitely a sense of character to his jokes. Eugene uses big words to sound smart; it’s how he passed as a doctor, and how he continues to pass as smarter than he is. He’s clever and resourceful, and he’s got a knack for things like practical science experiments and electronics repairs. He’s not brave or strong, but he uses his mind, and being constantly afraid, for someone with his intelligence level who can see a dozen ways for the world to fall down around him, is a special sort of hell. McDermitt puts this across beautifully this week, particularly in Eugene’s angry outburst to Gabriel after Gabriel tries to get him to do the right thing and in Eugene’s private breakdown in his quarters.

After last week’s episode, it’s nice to have an instalment that packs an emotional touch. Eugene might talk a good game, and he might have a great deadpan face, but he’s hurting and conflicted inside, and when that peeks through, it’s touching. Eugene, now more than ever, is a pitiable character. Everyone wants to think they’d be Daryl or Michonne; most people would be Eugene, if they even lived this far into the apocalypse. He’s relatable, and not aspirational, and that’s one of the reasons why the character is a favourite.

Of course, Eugene isn’t the sole focus of the episode. Rick gets out of a ridiculous predicament that he got himself into and Daryl tries to expedite Rick’s plan and fails miserably, getting both innocent people and Rick’s snipers killed in the process, but Eugene is what holds the episode together and gives it something with more punch, focus, and humour than recent visits to the wasteland. Eugene is just fun (even when being terrorised), and that’s not something you get a lot in The Walking Dead.

Eugene is appreciated, and that’s all he’s ever really wanted aside from pickles and sustained life.

Read Ron’s review of the previous episode, The King, The Widow, And Rick, here.

US Correspondent Ron Hogan has thought about growing a mullet, but a mullet and a giant beard might be too much hair on one face, and he’s not getting rid of the beard. Find more by Ron daily at PopFi.