The Walking Dead season 8 episode 5 review: The Big Scary U 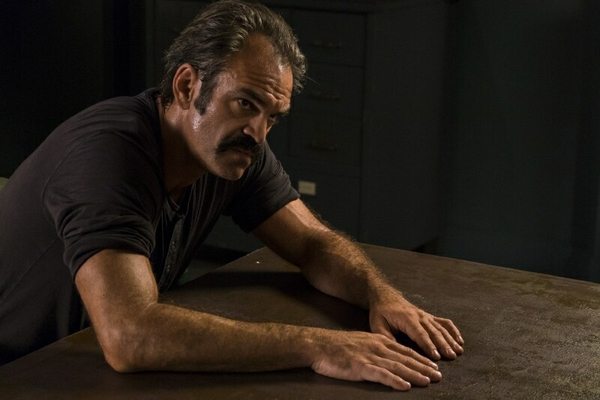 The Walking Dead season 8's talented cast are the stars of its latest episode, The Big Scary U. Spoilers ahead in our review…

Negan has been the show’s longest-running villain, and there’s a reason for that. Negan is one of the more popular characters from the comic book continuity, he’s played by one of the better actors on the show, and he’s running a massive network of thugs and murderers who keep the kinder communities under his thumb and keep his Saviors well stocked up on pickles and ammunition. He’s also the only person holding that organisation together, and without Negan’s presence, the Saviors will return to what they were prior to his arrival—squabbling gangs shooting at one another over cans of corn.

However, Negan, despite all his wit and glower, isn’t intimidating. Never once in his trailer chat with Gabriel does it seem as though Negan is going to kill the priest. That would be too easy, too simple, and it would give the character teeth. Strange that a man who made his debut bashing two people to death with a baseball bat would need some help being intimidating, but Negan comes off more as a bragging frat boy or a struggling stand-up comedian rather than someone to be feared. Maybe it’s television censorship, maybe it’s his constant references to balls and dicks and toileting accidents that take some of the edge off the character, but he’s not going to kill Gabriel, and Gabriel seems to know that.

If anything, Negan is the easy one to deal with, Simon is the one who comes across as the most dangerous member of the Saviors. Part of this is down to the relationship shown in the opening with Gregory and Simon having their interaction. Simon is clearly in charge, and the relationship between the two is almost abusive, with Simon repeatedly building Gregory up only to take him down a notch before manipulating him into solving the problem of open rebellion for Simon. Clearly, he’s either trying to keep the guy he can control in power or he’s trying to position Gregory to be the guy feeding Lucille the next time she’s hungry (and I doubt he’s all that particular about which one happens). Unlike Negan, who claims to like killing but only when it’s killing the right person at the right time, Simon’s two plans for Hilltop are let Gregory get things back into order or go in and kill everyone at Hilltop, which is quite a waste of manpower. There can’t be that many blacksmiths left in the world, and Hilltop seems to have all of them.

From the opening moment, The Big Scary U features a summit of villainy interspersed with what is essentially a confession between Negan and Gabriel. this is the very meeting that Rick and his gunmen covered with ‘hillbilly armour’ crash with guns blazing and a walker surprise. Cutting back and forth between the guys inside and the two trapped outside, we see just how helpless the Saviors are without Negan—almost immediately, there’s a worker revolt, a shooting, and supply shortages—and just how resourceful Negan is when he decides to do something everyone watching the show has screamed about for seven seasons—he guts and smears a walker’s entrails all over himself and Gabriel so they can make their escape, kind of.

The script, from Leslie David Johnson and Angela Kang (with an additional story credit to Scott Gimple) is fairly calm by Walking Dead standards. Aside from the Rick and Daryl c-plot requiring an explosion (which could have easily been leftover material from last episode, or saved for a future episode), there weren’t a lot of expensive set pieces. Gabriel and Negan is noteworthy mostly for the moody lighting utilised by Michael E. Satrazemis (who really emphasises that these two men are completely alone and surrounded by constantly having zombies rattle the trailer) and block the bulk of the light coming in from outside. The Council of Evil meeting is noteworthy for the way Simon, the most violent of the bunch, immediately takes control (or tries to) and the uneasy alliance between Dwight and Eugene that forms.

The performances are solid. Steven Ogg remains one of the more frighting players on the show, and his scenes with Xander Berkeley make me glad that both characters are still on the show, because it’s so twisted, even in a world full of cannibals and murderers. The uneasiness that permeates every stolen glance between Dwight (Austin Amelio) and Eugene (Josh McDermitt) says more than the two characters’ brief interaction. Dwight knows Eugene suspects him, even before Eugene basically confirms it later on. Seth Gilliam has done wonders with the role of Gabriel, having turned him from side character coward to stalwart, supportive member of Rick’s group, willing to give himself up to save others in pursuit of a meaningful death, and Jeffrey Dean Morgan shines when he’s given some human emotions for Negan to express in the brief heart-to-heart discussion of Negan’s pre-apocalypse wife. For a brief moment, Negan is sympathetic, and then he’s right back to swaggering and talking about his genitals (more tellingly, Negan keeps his word to Gabriel and doesn’t simply abandon him Gregory-style when things get tough).

Negan, by reinforcing to all his soldiers that “I am Negan” is more than just a creepy slogan to chant in unison, is trying to give his organisation longevity, even when he’s not around. It’s not terribly effective; sure, Negan is a god-like figure among his people (with his whistle along enough to make everyone take a knee in a crowded hallway scene in a cool moment from Satrazemis) but without him, they’re fighting and running out of food, and he’s gone… a day, perhaps? Two?

It’s unclear, but the Saviors’ compound clearly isn’t a sustainable enterprise without Negan and without significant support from the outside. The rift between the workers and soldiers isn’t a surprise; we’ve seen that already. Neither is the rift between the various faction heads, who are clearly used to being in charge and don’t necessarily want to bow to anyone other than Negan. It only takes a little bit of external pressure, and the lack of a strong charismatic leader, to crack the whole facade.

Kill the head and the body will die, as the late Doctor Gonzo said of the Ali-Frazier fight. Negan’s the head. And it’s up to Rick (or Daryl, who have a violent disagreement involving dynamite and .50 caliber machine guns) to figure out how to kill the head without the body completely disintegrating. The whole point, from both sides, is to minimise bloodshed. Except for Daryl, who just wants to blow a hole in the wall and be done with it, knowing that the terrified workers will probably be too busy trying to save themselves to pick up weapons and turn on Rick and company. Rick’s better angels are going to get a lot more people killed. Maybe not ‘blow up the walls and let the zombies overrun the factory’ levels of death, but… it’ll probably be a push.

Read Ron’s review of the previous episode, Some Guy, here.

US Correspondent Ron Hogan can kind of get behind Daryl on this one. Negan’s already basically wiped out The Kingdom, so why not just save the right kind of lives and use the dynamite? Find more by Ron daily at PopFi.