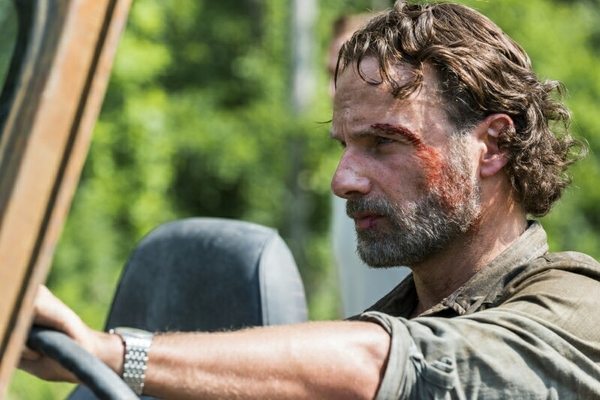 The Walking Dead season 's latest episode focuses on Ezekiel and Carol. Spoilers ahead in our review…

What makes a king? Is it pulling a sword from a stone, the right bloodline, a lifetime of practice and breeding, or is it just a guy who acts like a king to the point where everyone else around him believes he’s a king? As far as the world of The Walking Dead goes, the only reason anyone is anything is because other people believe in them. Negan is Negan because his followers believe in him, and want to be part of Negan. Rick is in charge because everyone has decided to let him be in charge, through a combination of previous experience and fear. Maggie and Jesus have taken over Hilltop from Gregory because people stopped believing in Gregory and turned to more active leadership. And Ezekiel became the king because people wanted to believe that he was a king, and followed him accordingly.

With their backs to a chain link fence, a wounded Ezekiel and his faithful sidekick Jerry have a brief moment of realisation. Ezekiel yells at Jerry to leave, to abandon him and save himself, and Jerry refuses. Jerry calls Ezekiel your majesty, and a wounded, despondent Ezekiel yells that Jerry doesn’t have to call him that anymore. Jerry, quite seriously, looks at “the king” and says solemnly, “Dude, yes I do.” That’s something that, in his darkest moments, Ezekiel is struggling to accept. His people fall on him to protect him from machine gun fire. His people fight through zombies to save him. Even Carol, when she sees Ezekiel in trouble, comes to his aid, and she’s the most pragmatic woman left in the world.

Throughout the episode, we see little moments of Ezekiel getting into character. It opens with him shaving his neck, tightening his braids, washing his face. He heads out to greet them, smiling and hugging, looking over his people with the knowledge that he was about to lead them into battle and that they might never see their loved ones again. But he’s strong, and he’s confident, and he believes in his people because they believe in him. He smiled and laughs and projects confidence, and people fall in line behind him because he’s charismatic. That confidence is tested throughout the episode, because we get a hard cut from the king surrounded by his cheering subjects to the king trapped beneath his bleeding, dying subjects. The cheerful confidence is gone; King Ezekiel is simply another man, trying like hell not to get eaten by the very followers that he marched into a killing field.

The episode focuses on Ezekiel and Carol throughout. In one of the flashbacks courtesy of writer David Leslie Johnson, Ezekiel talks about how he essentially turned himself into a king because at a certain point, he decided that he had to. Carol turned herself into a survivor because she had to. Part of it was choice, part of it was the world turning them into the things that they have become. Ezekiel hobbles through the episode, either under the gun of one of Negan’s followers—another guy who decided that he was going to become Negan—or with the aid of one of his few surviving followers while Carol tries to accomplish the mission at hand, capturing a couple of crates of machine guns.

Both characters are trapped, at the mercy of other forces beyond their control, and their responses are telling. Carol doubles down on being Carol; she’s pragmatic and she’s not willing to let Ezekiel stay behind and die despite both his injuries and his requests. The King’s facade slips completely, and he even drops the accent at certain points when he’s trying his best to get Carol and Jerry to leave him and find safety on their own. Jerry sees behind the mask, and refuses to leave the King’s side, if only because unlike Ezekiel, he knows just how much “King Ezekiel” means to the people around him more than the man himself does. Carol knows it, too; she watches the people around him get cut down, and then the few survivors come back to make sure that Ezekiel lives at the cost (or at least the risk) of their own lives in the process.

Melissa McBride, truthfully, doesn’t get a lot to do, but Khary Payton carries the episode, alongside with a Neganite who looks suspiciously like Jeffrey Dahmer. Between Payton and Cooper Andrews’ performance as Jerry, they do most of the heavy lifting and the character interaction between them works. Jerry knows that Ezekiel isn’t a king, but he needs to believe it anyway. They sell the point without belabouring the point, and it works. Jerry needs something to believe in more than he needs to know the Ezekiel is just an actor/zookeeper; what everyone was doing prior to the fall doesn’t matter, what matters is that the Kingdom needs a king more than they need a couple of M2 Browning .50 caliber machine guns (and Rick and Daryl show up at the last minute to save the day anyway).

There never feels to be much in the way of peril, if only because we’re dealing with two face characters, both of whom the Neganites have been told to capture alive if possible. That doesn’t really put any teeth into either Carol’s shootout or Ezekiel’s captivity. Still, anything is possible in this universe, and we do get a pretty tragic moment near the end of the episode, and there’s a lot of emotional impact in the way Dan Liu chooses to frame the episode with Ezekiel’s happy beginning and unhappy trudge back into the Kingdom without the friends he departed with. He’s heartbroken, and it’s going to be up to Carol, Jerry, and the rest of the Kingdom to come to the aid of their leader, rather than having their leader coming to their aid.

Ezekiel has lost a lot in a very short time. His illusion of confidence has been shattered. The group of loyal followers he’d led through victories has been blown to pieces, quite literally. He’s chosen to become the king, but the kind of king that he’s going to be is going to change, thanks to the world’s interference. He’ll either have to roll with the times or get out of the way, because Negan’s coming for him, and he’s aware of that. There won’t be much time for moping and sadness over dead friends, otherwise all of his non-dead friends are at risk of joining the ever-growing ranks of the walking dead.

US Correspondent Ron Hogan knows a defeated man when he sees one, and Ezekiel is a defeated man. The reality of the world around him seems to finally be settling in. Find more by Ron daily at PopFi.