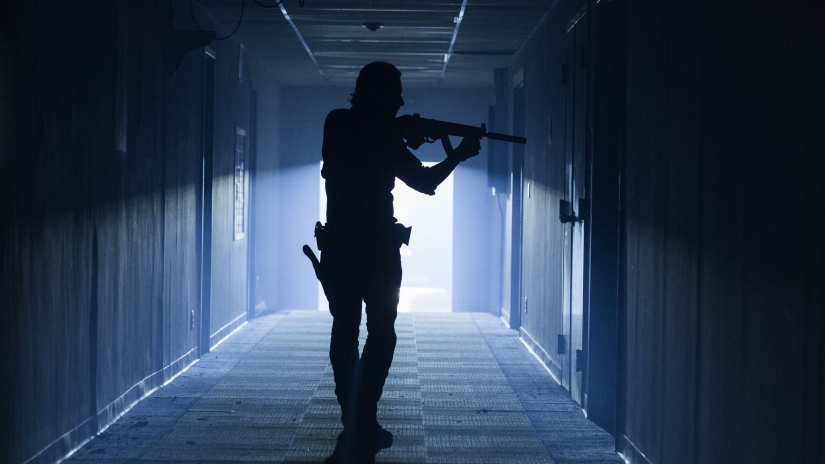 The Walking Dead season 8 delivers another all-action episode in The Damned. Spoilers ahead in our review…

Two episodes in, The Walking Dead‘s eighth season has been nothing but action. There have been little fits and starts, and pauses for breath, but for the most part, two episodes in, we’ve seen a whole lot of people firing machine guns and a whole lot of cars covered in salvaged metal driving in front of armed compounds to wall people inside. There’s also another reminder of just how effective zombies can be in this new environment as a siege weapon.

The team Dwight sent off in the first episode is holed up in some sort of compound, cleaning and maintaining their weapons. There’s a bit of light comedy involving a goofy screw-up named Todd (every group apparently has their version of Jerry), and then, just when the group is about to get ready to move out, a bunch of armoured vehicles roll up and people start opening up with machine guns. Aaron and company hop out, and another huge gun battle ensues. Interspersed between the chaotic violence, yelling, and gunfire are a pair of incredibly tense scenes of Rick and Daryl doing a room-to-room search for some rumoured heavy weapons and Tara, Jesus, and Morgan doing a similar sweep-and-clear action in another Saviors stronghold.

One of the difficulties with The Damned is that it’s deliberately confusing. We open with a montage of close-ups of faces and eyes, smoke, and people looking concerned, and then we’re thrown into the action almost immediately. It’s up to the viewer to parse out over the rest of the episode just who is doing what and for what end. It all comes together, but one of the problems with The Walking Dead has been a poor sense of place. I’m not sure where any of these locations are, or how far away from one another they are, so I don’t know just how quickly Negan can reinforce one particular stronghold or another. No one gives any specifics, either; they simply talk about, for example, stopping one escapee from getting back to the compound to “the north” to warn the others about the attack, or the need for Rick and Daryl to go to a specific office complex to gather up heavy weapons of some kind.

One of the brilliant things in the script, from writers Matthew Negrete and Channing Powell, is the use of zombies. The Saviors have them set up as a sort-of moat in one compound, requiring Morgan to distract them and hope that Diane is a good enough shot with a bow and arrow to put down two guards almost immediately without firing a shot to warn the others. The other great use of the zombies is in the main gunfight. Aaron, throughout the battle, has to rein in his forces. They don’t have to storm the compound, they just have to make sure no one gets out and wait. The reason for this isn’t immediately known, but roughly halfway through the episode, the first of the dead Saviors sits up and takes a big bite out of the leader of the squad right about the time she figures out just why no one’s trying to attack them.

The bigger action sequences are a nice break from the tension of the Daryl and Rick scenes, with Ezekiel and the Kingdom’s further adventures with Carol providing a little bit of a laugh. There’s just something about the no-nonsense Carol and the all-nonsense Ezekiel together that works, especially when you’ve got Jerry around to grin and deadpan though several effective punchlines. Ezekiel’s whole philosophy, projecting confidence until you and everyone around you feels confident, makes a lot of sense; the Kingdom is a cult of personality, after all, and he’s the personality holding it all together. As long as Ezekiel is supremely confident, the Kingdom can do just about anything.

The other big quandary of the episode, specifically Tara’s drive for revenge, doesn’t feel quite right. I’m not sure if it’s just because the character has primarily been comic relief up until now or because Jesus is still underdeveloped. When it’s, for example, Morgan and Rick discussing redemption and second chances, it works a little better than Jesus and Tara having the same conversation. Tara, who redeemed herself from her role as a member of the Governor’s group, might work better as the one seeking to take prisoners and allow redemption for others, but instead she’s given essentially the same business as Morgan, just with a much lower body count.

Morgan’s bloody revenge saga, told in a few minutes over the course of this episode, is really well done. Just watching Lennie James stalk through a hallway with two guns in hand, blasting people both onscreen and off, is a lot of fun. We didn’t know the guys who got shot alongside him, but the shooting is staged perfectly for maximum shock value, and watching Morgan wake up on the ground, staring into the eyes of the dead guy beside him, has an emotional impact that makes his follow-on rampage… well, it’s not exciting, because it’s not played for excitement. Morgan is essentially the Terminator, wandering the halls of the police station, shooting basically everyone. It’s only through the intervention of Jesus that he doesn’t just wander out to gun down the prisoners captured by Jesus at the end of the episode.

It’s an interesting emotional beat, and Rosemary Rodriguez is smart not to play it as some sort of satisfying 70s revenge thriller moment. Morgan isn’t really getting vengeance, he’s rotely following Rick’s orders. Rick said to kill them all, and Morgan is going to do just that. Morgan is flat, damaged emotionally and psychologically, by what he’s gone through and what he continues to go through. It’s the exact opposite of what would be expected, and it’s an interesting counterpoint to Tara’s urge for revenge because for Morgan, it’s a hollow, unhappy thing.

There’s no satisfaction to carrying out Rick’s orders, or for killing the people who are killing his friends. If anything, Morgan is sad about what he’s doing, because he’s taking away a lot of second chances. Of course, Tara listens to Jesus and gives someone a second chance, only for the guy to attempt to take Jesus hostage, so… perhaps Rick is right that the Saviors might need to forgo redemption in favor of avoiding unnecessary deaths. Or maybe Jesus is right and at least some of the Saviors can be redeemed.

It can be two things.

There are rarely any black-or-white answers in The Walking Dead‘s world. Enemies can become friends can become enemies again; given the right motivation, even Rick’s oldest allies could take up arms against him. Saviors surrender en masse; a solo Savior wets himself in purpose to lull others into a false sense of security to try to murder his way out of captivity. Morgan gets redeemed from mental illness; Morgan becomes a killing machine again. There’s rarely a satisfying answer in this world, and the tasks most needed to keep friends alive might cost more than just a few spent cartridges or a bloodied sword.

US Correspondent Ron Hogan finds it very strange to see The Walking Dead continue to pose moral questions in the midst of a promised ‘action movie’ season. Find more by Ron daily at PopFi.