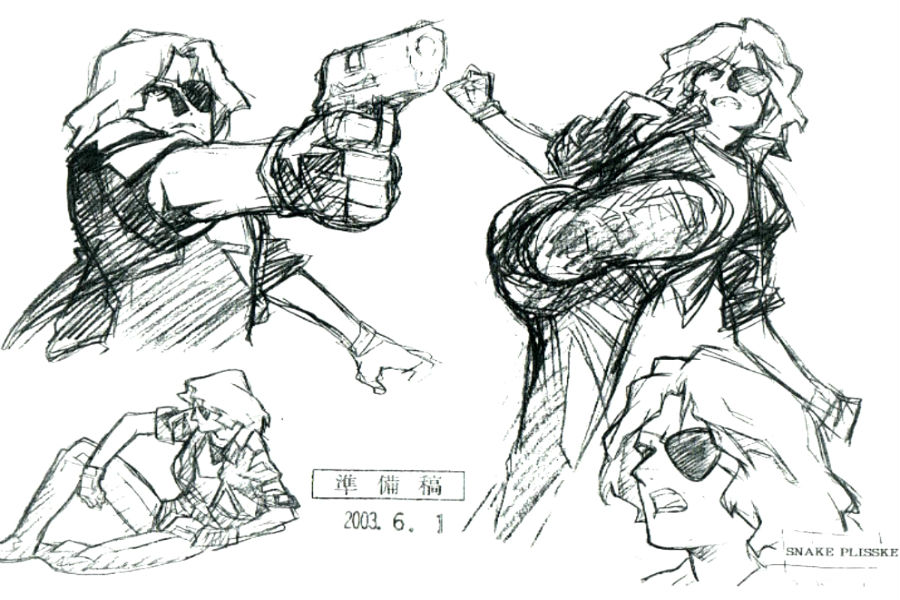 Corey Mitchel talks us through the unmade Snake Plissken anime follow-on from Escape From L.A….

The last time Snake Plissken escaped on the big screen was 1996’s Escape From L.A., and while that movie had moments it failed to connect with viewers the way Snake’s original adventure did. Escape From New York remains a cult classic for many reasons: its grim depiction of the future, John Carpenter’s taut storytelling, the moody score and the memorable cast of characters, led by Kurt Russell’s insanely cool outlaw Snake Plissken. Despite being an amoral anti-hero with few redeemable qualities, Snake holds a special place in the heart of genre fans. Sadly Escape From L.A.’s financial failure and tepid response pretty much doomed any further outings with Russell playing the role, and the actor has since ruled out playing an aged version of Snake. For years a remake of the original has been mooted, with a revolving door of actors, screenwriters and directors coming and going.

It now looks like Robert Rodriguez will be the one tasked with updating Snake for a new generation; considering Escape From New York inspired him to become a filmmaker, and the amount of Carpenter homages littered throughout his work, the movie should be in safe hands.

John Carpenter himself is likely to have little involvement, but what fans may not realise is that he, Russell and producer Debra Hill were once part of an ambitious transmedia project dubbed The Snake Plissken Chronicles over a decade ago. This project was to explore different sides of Snake’s story through a comic series, an anime and a video game. While the comic was published, both the anime and game were scrapped before completion.

I recently spoke with Corey Mitchel, who co-wrote the screenplay for the Snake anime alongside William Wilson. Corey talks about how the unique way he landed the gig, his close collaboration with John Carpenter and Debra Hill, the storyline and Carpenter’s favourite line from the script.

Could you give a little background on your writing career, and the path that led to the project?

At the time of landing the Snake role, I was working as a script reader for Debra Hill with the side goal of becoming a working writer. To this regard, whenever I had any free time, I was writing spec scripts to build my portfolio. The Snake Plissken anime was my first paid writing assignment. How did the Snake assignment come to you?

I had learned that Debra was developing the Snake anime project along with John Carpenter and Kurt Russell. I knew I could write a kick-ass story so I bothered Debra on a daily basis to give me a shot. Finally, one day she said “Okay, you’ve got five pages to give me the best Snake scene I’ve ever read, make it good.” And so I wrote the most exciting and action-packed scene for Snake Plissken that I could come up with and ended the scene dangling on a cliffhanger. After Debra read the work, she said “It’s great, but what happened to Snake?”  I told Debra that I would need to write more pages for her to find out to which she replied “You’ve got five more pages.” And so I wrote another exciting scene and, once again, left it dangling on a cliffhanger. This would end up getting me another five pages and so on and so forth, until, one day, she handed me back my pages and said, “These will be the first twenty-five pages of the script. Congratulations.”

Were you a fan of the series prior to working on the anime?

I was and still am a huge fan of the series! It featured the triple-threat of cool in Kurt Russell, John Carpenter, and Debra Hill.

Could you give an overview of the story for the anime, such as the setting, Snake’s new mission, any returning characters and such like?

I’m not sure how much of the story I can talk about as I’m still hopeful that someday the screenplay will get produced, but I can tell you that it is much larger than any previous Snake offering. The story spans multiple U.S. cities such as Washington DC, Lynchburg, Virginia, and New Las Vegas and introduces us to villains unlike anything Snake has dealt with before. We experience the fascist government that currently controls the United States firsthand, discover more about Snake’s past as a soldier, and meet the person who took his eye. In the end, everything builds to a climax that is huge in scope, spectacular in fashion and includes a fight scene that pays homage to Bruce Lee’s Game Of Death. It is truly awesome!

Was the story set before or after Escape From L.A.?

The story takes place in 2020, seven years after Escape from LA.

Was Cliff Robertson’s President still in charge in 2020, and did the film address the rather bleak ending of the previous film?

No and no. This project was a Snake Plissken project and was separate from the Escape movies because of right’s issues, so we didn’t mention or refer to them.

How did the script tackle the character of Snake, and did Kurt Russell have any input on the story?

Debra Hill loved Snake Plissken and was going to make sure Will and I didn’t mess up the character. As a result, one of the first things she did after we landed the gig was to give us a list of rules that must be followed when writing for him. I tackled the character by following these rules. As for Kurt Russell, he was involved in the project, but all of the direction I was given as far as the script was concerned came directly from John and Debra. Do you recall any of the rules Debra wrote involving Snake’s character?

Sadly, I can’t recall with any accuracy what the Snake Plissken rules were or if it was John or Debra or both who wrote them, but I do, however, recall that it was a long list of rules and that some of them were very hard to keep from breaking.

What was it like working with John Carpenter and Debra Hill?

John and Debra were completely hands-on and absolutely incredible, and I loved every second I had the chance to work with them.  There was nothing cooler than sitting outside Debra Hill’s house polishing a script I wrote with her and John Carpenter. It was the most fun I’ve ever had as a writer.

Did you or William have any interaction with Production I.G. while working on the script?

Yes, Production I.G. was very hands-on.We worked closely with Maki Terashima-Furuta who is now the President of Production I.G. She was amazing to work with and extremely talented. I absolutely loved the company and would jump at the chance to work on a project with them again in the future.

Was it a fun project to work on? Any fond memories?

It was the best time I’ve ever had writing a script! I was able to hang out with two of my heroes – John and Debra – on a frequent basis to collaborate on a project that we all believed was truly special. I have a zillion fond memories working on the project with John and Debra, but one of the most frightening for me was the day Debra informed me that I had to cut the original version of the script from 125 pages down to 80 pages and that nothing in the story better change. I remember thinking ‘That isn’t possible’. However, I was wrong. With John’s guidance, we went through the script line by line and eventually reached our 80-page goal without the overall story changing much at all. John and Debra taught me the most valuable lesson I have ever learned as a writer, burning the fat of a script can be just as important as writing it. Less is more.

Do you have a favourite scene or character moment you loved from the script?

I have many scenes and character moments I like from the script, but John’s favourite line involved a scene where Snake was attempting to sneak into Washington DC and a couple of gangsters manning a large gun installation spot a police helicopter flying overhead as it provided cover for him. One of the gangsters points to the sky and yells out “Flying Pigs!”

Did the anime have any crossover with the Snake Plissken’s Escape game that was being developed around the same time?

Can you give any insight into why the project wasn’t ultimately produced?

Not really. But I personally believe that if Debra didn’t pass away, you would’ve seen it. She was a fantastic producer and would have made it happen.

Apparently, a 30-second teaser for Snake was produced before the project was cancelled. Did you get a chance to see it?

Yes, and it was marvellous! Seeing Snake brought to life using animation similar to that of the jaw-dropping animation from Kill Bill doesn’t get much cooler. I believe the footage was originally supposed to be included as bonus content for one of the Escape movies when it was re-released on Blu-ray or DVD.

After years of development, it looks like a reboot of Escape From New York is moving ahead with Robert Rodriguez directing. As a fan, is there anything you’d like to see from this new version?

Just make it fun! I think Robert Rodriguez is a perfect choice. He’s fun and the content deserves that.

Corey Mitchel, thank you very much.

While Snake ultimately didn’t come to fruition, Corey is currently busy working on a graphic novel titled Miles From Nowhere, based on a concept he and John Carpenter originally developed for television. “When an alien prison transport crashes near the tiny town of Nowhere, New Mexico, over one hundred of the most dangerous criminals in the Galaxy are set free. Now, one lone Deep Field Marshall and a local cop must work together to hunt down and kill every last one of them before they annihilate the planet.”

Miles From Nowhere is currently due for release in July 2018, and anyone who’d like to track of the graphic novel can learn more here.